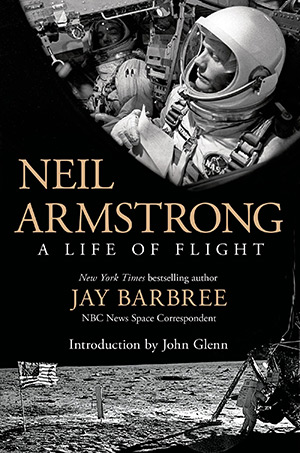 Neil Armstrong: A Life of Flight begins with the famed aviator launching from the aircraft carrier Essex in an F9F Panther jet September 3, 1951. He was 21 years old, flying straight into combat in the Korean War. After helping destroy a North Korean bridge, Armstrong’s jet hit an antiaircraft cable stretched across the valley. Flying at 350 knots, the cable sliced six feet of wingtip off the Panther like a knife, leaving the plane all but uncontrollable. Author Jay Barbree describes every detail of Armstrong wrestling the crippled plane over friendly territory, and his high speed ejection and parachute landing to welcoming faces at the marines K-3 base in South Korea.

This book is not a full biography of Neil Armstrong’s life, but a general history of his flying career and an overview of the U.S. space program. Much of the narrative in this book is derived from conversations, interviews, emails, and memories of Armstrong provided by the author.

After Armstrong returned from Korea he went back to Purdue University to complete his aeronautical engineering degree and went to work for the National Advisory Committee on Aeronautics (NACA). Barbree explains how Armstrong’s work at NACA put him at the controls of the famed X-15 rocket plane and made him a highly respected test pilot. During this same time Armstrong and his wife Janet lost their three year old daughter Karen Ann to an inoperable brain tumor. Barbree relates how the loss affected Armstrong throughout his life.

With his impressive resume as an engineer, Korean War veteran, and NACA test pilot, Armstrong was an easy selection for the second group of NASA astronauts in September 1962. NASA showed their trust in Neil when he was assigned to command his first space flight and demonstrate the first docking of two spacecraft in orbit. Barbree punctuates the narrative with the sights, sounds, feelings, and thoughts of the astronauts as Gemini 8 lifted off to rendezvous with an Agena target vehicle. After completing a successful docking, the number eight reaction control system thruster on the Gemini vehicle stuck open, causing a nearly uncontrollable roll. Armstrong was forced to shut down the system and activate the reentry thrusters to regain control of the spacecraft. After their safe Earth reentry and recovery, NASA reviewed the in-flight emergency and determined that Armstrong and his crewmate Dave Scott performed the correct actions to save Gemini 8 and their lives. Scott said about Armstrong, “He’s slow in making decisions on the ground but he’s the quickest pilot I’ve ever seen in the cockpit. He’s easy to work with, very smart-really cool under pressure.” (Page 72)

While the Gemini program was concluding, the Apollo program was going full steam and gearing up for the launch of Apollo 1. On January 27, 1967 Armstrong was in Washington D.C. representing NASA at a White House reception. After the gathering, all the astronauts received a call that the crew of Apollo 1 had died while performing an on pad launch test. The author writes that Armstrong “quickly phoned a friend involved in the test…. The friend told him apparently somewhere beneath the seat of Gus Grissom there were unbundled live wires that had been walked on and one had apparently been chaffed. Its insulation was worn and torn…. The wire must have sparked. Flames filled Apollo 1, feeding on the oxygen-soaked flammable materials surrounding the astronauts.” (Page 139) Barbree’s claim is interesting since the months-long investigation into the cause of the fire had not even begun. Yet this person at Cape Canaveral supposedly knew the specific cause of the fire only hours after the event.

Throughout the narrative the author extensively uses quotes attributed to Armstrong. Barbree states in the introduction “Neil’s words in this book are direct quotes by me and others I know to be trustworthy. They are from years of personal e-mails, recorded interviews, 51 years of this reporter’s notes and files — a voice history as Neil told two NASA historians and transcripts of every word he spoke in space and on the moon. The primary engine driving this book is accuracy: that’s how Neil lived his life.”  Disappointingly that is not how the author wrote this book.

After Armstrong’s and Aldrin’s captivating moonwalk, the author describes the liftoff of the LM Eagle’s ascent stage from the Moon. Barbree writes, “Neil watched as flames from their ascent rocket ripped into the moon. Gold foil tore away from the landing stage, showering bits and pieces outward in all directions, and he saw the American flag they’d labored to raise whipped back and forth by their ascent engine’s flames until it toppled to rest in the lunar soil.” (Page 281)

Once again misinformation has crept into the story. Over the years the observation of the flag falling over has always been attributed to Buzz Aldrin (First Man, page 537).

After retirement from NASA, Armstrong bought a farm in Ohio and taught aeronautics at the University of Cincinnati. Barbree describes the Space Shuttle program with the first launch of Columbia on April 12, 1981 and the Challenger explosion on January 28, 1986. Armstrong was appointed to the Presidential Commission to investigate the cause of the Challenger accident.

The nation was shocked once again on February 1, 2003 when space shuttle Columbia broke apart on reentry, killing all seven crew members. The official investigation concluded that foam debris from the external tank punched a hole in the left wing of the orbiter during launch. While reentering Earth’s atmosphere, hot gases infiltrated the wing, compromised the structure, and caused the vehicle to disintegrate. Barbree’s text says that the debris caused a “hole in its right wing” (Page 328). All reports and official documentation show that the hole was in the left wing.

Some of these errors may be attributed to poetic license or typographical error. Although, unfortunately they call into question all of the author’s other quotes, thoughts, and feelings attributed to Armstrong.

Neil Armstrong: A Life of Flight is dramatic and entertaining in a nightly news or Hollywood sense of storytelling. The book cover is attractive and includes the only known full body still photo of Armstrong on the lunar surface. Throughout the book many historic photos accompany the text, nicely illustrating the story as it flows.

In general this book is a good overview of Armstrong’s life and a brief history of the U.S. space program.