Book Review: No Dream Is too High 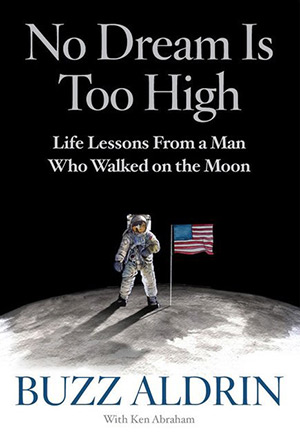 Much like Buzz Aldrin’s famed space launches, No Dream is Too High opens with a Countdown. This isn’t, as the name suggests, a reverse sequence of numbers, but a prologue written by Christina Korp, Aldrin’s long-time friend and manager, who uses the affectionate title of “Mission Control Director.” The book is half memoir and half inspirational self-help book, using Aldrin’s stories as a backdrop for broad life lessons.

Each reader may take something different away from these lessons. Aldrin’s story about his hitched ride on Air Force One is the perfect example. He, or rather Korp (acting on his behalf), was told “no” at every level, but they kept working their way up the ladder, using every backdoor or connection they could until they finally heard “yes.” Whether the reader chooses to see Aldrin as persistent or audacious is up to him or her.

The same can be said when, later in the same chapter, Aldrin and Korp got the White House to agree to meet with the Apollo 11 astronauts for the 45th anniversary—with one hitch. For the first time in history, according to Aldrin, the President would meet only with the astronauts, not their families. So he and Korp used the same tactics used to get Aldrin on Air Force One, but this time all they got was the same “no.” In response, Korp had the families get on the same transport as the astronauts (and Neil Armstrong’s widow) and told Aldrin to casually mention to President Obama that their families were waiting in the reception area. Faced with this, Obama, of course, had no other choice than to say “bring them in.”

Throughout the book, the lessons that Aldrin imparts come back to his central theme that nothing is out of reach if you work and try hard enough. Readers, however, might hear either “stay the course, and you can achieve your dreams” (as Aldrin intended), or something closer to “when you’re one of the first men to walk on the Moon, it’s okay to bend a few rules.”

With each purported lesson, it ultimately falls to the individual reader to look within himself or herself to determine, based on his or her own life, how he or she reconciles the lessons that Aldrin teaches with the anecdotes provided. Regardless of which side of the fence the reader falls on, one thing is certain: the choice of anecdotes, as well as the lessons that introduce and follow them, give a keen insight into Aldrin’s personality.

The writing style is clean, though it doesn’t always flow well. At a few jarring points, it feels like an anecdote is about to begin, but it ends abruptly with an “I’ll get to that later” and jumps back to where it was in the first place. Beyond that, the anecdotes are well chosen and vivid, and the book is entertaining.

The Library of Congress lists it as both “memoir” and “self-help,” so those looking for a straight memoir may prefer to stick with Aldrin’s 2009 book, Magnificent Desolation. But, despite the “self-help” aspects of the book, each of the many stories relays Aldrin’s personal sense of humor and history, making this an entertaining read for anyone wanting to know the second man on the Moon a little bit better.

Mike White is a freelance writer and Apollo enthusiast, currently living in the suburbs of Chicago, Illinois.