Book Review: On the Shores of Titan’s Farthest Sea 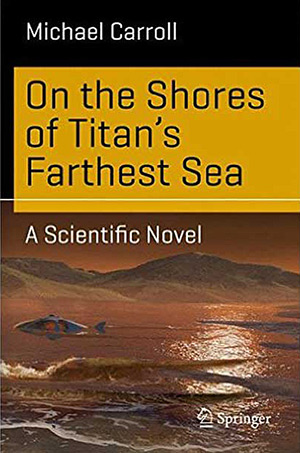 Springer Publishing’s new line of scientific novels targets those readers who want their fiction based on real-world science but not limited by it. On the Shores of Titan’s Farthest Sea by Michael Carroll is a good example of this approach. The story’s action revolves around characters who occupy a fictional Mayda Research Station that is located on the shore of Titan’s actual Kraken Mare (Sea) near 60 degrees north latitude.

The main character, Abby, is a “gas girl” or meteorologist, there to study Titan’s thick nitrogen-methane atmosphere. Abby enlists the help of some of her fellow scientists to investigate the mysterious death of her friend Kevin. She also calls on an old family friend, Jeremy, back on her native Mars to assist.

The story moves from Titan to a terraformed Mars to introduce the readers to Sable, the imprisoned charismatic mastermind of terrorism on Mars. His long line of victims included Abby’s parents. Abby’s friend Jeremy is a retired spy who put Sable away with the help of Abby’s eye-witness testimony. Even though he’s incarcerated, Sable is still running a criminal syndicate that is pirating resources mined in the outer solar system and bound for the inner planets. How his activity connects to Kevin’s death evolves as one of Sable’s minions travels to the asteroid Vesta, and another operative damages supply ships around Jupiter’s largest moon, Ganymede.

While learning more about connections between characters and events, the reader is taken for a tour of a realistic future where the worlds of the solar system are actively being studied, mined, terraformed, and settled. For this reader, definitely a member of Springer’s scientific novel target market, this vision of people living and working in space is actually more interesting than solving the murder mystery. It’s not that the mystery is badly written, it’s just that I’ve only “visited” the exotic environment of Titan once that I can remember (in Kim Stanley Robinson’s 2312), and never “lived” there before.

Riding along with the characters, I also got to experience the painful consequences of high g maneuvers, the difficulty of fixing nuclear reactors in remote locations, and the thrill of piloting a submarine on Titan. Having part of the habitat carved out of Titan’s granite-hard ice was a neat idea to explore and it was interesting to see some of the hobbies that people might indulge in (like growing roses) on the space frontier.

The author added a nice dose of humor via some speculation about mass hallucination in an isolated environment that might be exacerbated by various forms of contamination. However, the method by which the hallucinations spread to a separate group who are not exposed to the contamination but still “catch” a hallucination from some distance away doesn’t seem to be supported by any actual science.

But I found nothing to quibble about with the space science. Carroll’s long and successful career as a space illustrator shows in his vivid descriptions and imaginative extrapolations of what is currently known about Titan and other worlds visited in the story. Readers can trust that all facts cited were checked by an impressive Editorial Board of 13 scientists provided by Springer.

Carroll created the lovely cover illustration. The book (sadly) does not include any other illustrations by Carroll, but science lovers will appreciate the additional images such as the color map of Titan showing the location of the fictional station, color images of a terraformed Mars, and NASA images of Titan and asteroids plus petroglyphs that play a role in the story. The descriptions of the scientific underpinnings of the settings used in the book were fascinating to read, and may inspire more stories set on a realistic Titan.

Because the book is print-on-demand, the print copies are more expensive than mass-market paperbacks even with Amazon’s usual 20 percent discount. The ebook is more affordable, especially directly from Springer.com. But for those who understand and appreciate the value of a realistic vision of people living and working in space, On the Shores of Titan’s Farthest Sea offers an inexpensive ticket to visit that enticing future for a weekend.