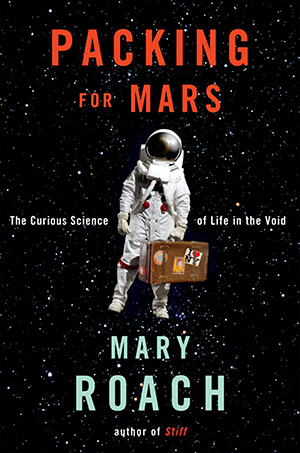 Mary Roach is a best-selling author not known for books about space travel. Instead, she is famous, or perhaps notorious, for books that take a light-hearted approach to subjects that are not particularly light hearted. She has gained an enthusiastic following through Stiff, her book about dead people, Spook, her book about ghosts, and Bonk, her book about sex. In Packing for Mars: The Curious Science of Life in the Void, she has moved far away from her trademark one-word titles, but has retained her knack for discovering and reporting on rarely discussed aspects of her subject matter.

Despite its title, Packing for Mars is not so much about what a space traveler should take along on a journey to the fourth rock from the Sun, as it is a chronicle of the nitty-gritty of space travel. Covering every major era in the American space program, from Mercury, through Gemini and Apollo, to the Shuttle and International Space Station (ISS), she explores such important but little discussed topics as how to go to the bathroom while weightless in orbit, space sickness, hygiene in space, weightless sex, bone atrophy, diving to Earth from space like Kirk and Sulu did in the 2010 Star Trek movie, and how to keep from going crazy while cooped up for months in a small metal can.

A lot of the things Ms. Roach covers in this book will not be news to hard core space weenies, but she does cover several things that even I did not know. For instance, Yuri Gagarin became the first human in space, not because Soviet rocketry was more advanced than American, but rather because the Soviets were more willing to boldly go where no man had gone before. America sent up two chimpanzees named Ham and Enos before they were willing to risk a human. Thus, although Gagarin was the first man in space, Ham was the first primate. I had a vague recollection of Ham’s flight, but did not realize that it was the difference between winning and losing the race to space. The “Original Seven” Mercury astronauts were not at all pleased to be preceded by a couple of chimpanzees. The fact that the chimps could “fly” the Mercury space capsule made people wonder what all this “Right Stuff” was all about. The Mercury astronauts considered themselves to be “Spam in a can,” meat that went along for the ride. Then after their flights, they had to act as if they had done something heroic. Actually, they had done something heroic, but it wasn’t controlling a spacecraft. It was enduring the cramped, uncomfortable conditions, and having no control over the vehicle they were on.

Ms. Roach is known for gaining first-hand knowledge of her subject area before writing about it. She interviewed astronauts and cosmonauts, as well as key support personnel on the ground. She visited multiple spaceflight installations in both the USA and Russia. She experienced weightlessness aboard the “Vomit Comet” aircraft by talking her way onto a flight of high school students who were doing weightless welding experiments. The Vomit Comet, a Douglas C-9, alternated periods of weightlessness with periods of high g-loading by flying a series of 30 parabolas. Astronauts need to be able to handle both high and low-g situations. Although she had been instructed to act serious and pay attention to the welding, on the 27th parabola she couldn’t help flying through the air like Superman. She said of the experience that it was probably the coolest moment of her entire life. In contrast, one of the other people on the flight became ill on the fourth parabola and spent the next 26 parabolas moaning and gurgling, belted into a seat.

One of the astronauts Roach interviewed was ISS commander Peggy Whitson. After spending six months in weightlessness on the International Space Station, Whitson and her crewmates endured a ballistic re-entry on a Soyuz space capsule, which subjected her to eight g’s for several minutes, culminating in a bone-jarring “landing” on the Kazakh Steppe that left a large Soyuz-shaped crater in the ground.

Anyone aspiring to become an astronaut, cosmonaut, taikonaut, or civilian spaceflight participant should definitely read Packing for Mars. It discusses things not typically found in astronaut biographies. It goes behind the scenes and exposes the not so glorious aspects of spaceflight. It also shows the true heroic nature of the early space fliers, not just because they risked death doing things that nobody had ever done before, but also for the indignities, inconveniences, and discomfort that they had to endure.