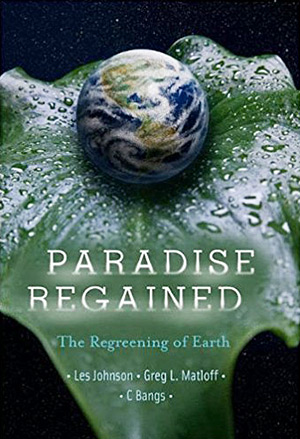 Paradise Regained: The Regreening of Earth is a scientifically informed voice of reason that addresses the environmental state of our world and how space technologies can improve it. It also might provide the intellectual stimulus needed for space and environmental activists to work together as one cultural movement to create a better future.

Paradise Regained states the authors’ philosophical premises up front: “Life is Good.” This is different from the line of clothing that celebrates a comfortable life in 21st century America, but instead addresses life itself, all life. From this premise, they argue both for improving life on Earth through active environmental protection and through developing space technologies.

The beginning includes a chapter-by-chapter summary of their entire argument. So why bother reading the rest? Because the authors cram in a lot of important facts and persuasive reasons – everything from Neanderthal cave paintings to methods of asteroid deflection – to advance their points.

Part I: “Mythical Paradise” takes issue with the argument that the Earth was perfect and pristine before the rise of humans, and that life on Earth would have been better off if we hadn’t damaged the environment. It begins with a scientific understanding of the formation of the Earth and how it has been implacably hostile to life. Prior to the rise of human civilization and moral codes of equality and justice, the authors argue that life on Earth was dominated by a vicious struggle to survive and by the strong ruling over the weak. Other problems, like seasonal weather, floods, famine, and disease, were only overcome through the collective actions of humans over millennia. The point is clear: Earth was not a “paradise” before humans, and going back to that state would not be a good thing.

Lest technologists get too cocky, Part II: “Paradise Lost” then turns around and points out the environmental problems we face today, including decreasing biodiversity, hunger, pollution, and limited energy resources. It describes the current environmental problems facing our planet, from overpopulation to species extinction to climate change, and discusses the limitations of current Earth-based technologies to overcome the problems without assistance from space. The authors are careful about identifying which problems are within human control and which are not. More importantly, they show the pros and cons of the Earth-based alternative energy sources, and why they will not be enough to sustain a civilization that is based on the premise that “life is good” and should be kept that way.

In the third part of the book, “Paradise Regained,” the authors lay out what space technologies can be used to improve life on Earth, including spacebased solar power and Helium-3 fusion to provide energy, exporting polluting industries to places without ecologies (asteroids, the Moon), and importing metals and other materials from asteroids to feed our future economic needs. This part takes the most imagination as well as the most money to visualize because it calls for a fundamental transformation in the industrial basis of our world’s economy. This includes investing in technologies to move, deflect, and mine asteroids, lunar mining, and space-based solar power ($36 billion for the first solar power satellite, according to the authors, but they ask how this might compare to the cost of another war to defend access to oil in the Middle East).

Resources for additional reading, including the National Space Society’s (Space Solar Power web page), are included in each chapter. The authors also include notes of caution, pointing out that dust kicked up by lunar mining might damage astronomical telescopes on the Moon’s far side and that nuclear weapons powerful enough to deflect asteroids might create political or military problems on Earth.

Paradise Regained is not unique in making the case for uniting space and environmental activism. Where the authors break new ground is in their rational, lean, but thorough demolition of the anti-industrial arguments used against sending humans and our technologies into space. They make the case repeatedly that conservation alone will not lead to a better environment, nor to a better existence for all life. They point out that we enjoy many advantages through our space technologies, including communications, comforts, and conveniences, that we would not wish to do without. Paradise Regained is an important book because it provides these persuasive arguments and supporting facts in a compact form that will be useful for all space activists to better explain how expanding the reach of space technologies will improve life on Earth.