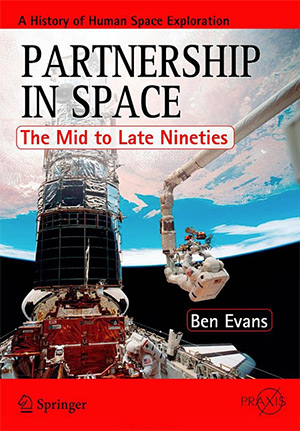 In his series A History of Human Space Exploration, Ben Evans has hit it out of the park once again. Partnership in Space is the fifth book in the set and continues his epic account of America and Russia expanding the presence of humans in space.

The Space Shuttle missions are described in great detail, beginning with the liftoff of Discovery STS-41 at 7:47 am EDT on October 6, 1990 to launch the Ulysses spacecraft. After a plane change at Jupiter, Ulysses settled into a polar orbit of the Sun to observe the physics of the solar environment.

This book, and the entire series, is not a simple listing of space flights and their accomplishments. The author thoroughly describes each mission in the context of their respective space program as a whole, and in the overall complexity of world affairs and politics. For example, the collapse of the Soviet Union played a major role in the launch and operation of the Mir space station, and also in the cancellation of the Russian Buran shuttle after only a single unmanned remote controlled flight.

Each Shuttle flight, from STS-41 to STS-67 in March 1995, is chronicled in depth. Evans describes the mission objectives and the crews that carried them out. The space fliers’ individual biographies are interesting and contribute substantially to understanding the crew dynamics of each flight.

While reading this book it is easy to get immersed in the excitement of space shuttle missions like Endeavour on its first flight, STS-49, launched on May 7, 1992. It was a mission of several firsts. For the first time ever three astronauts ventured out together on an extra vehicular activity (EVA). They captured the Intelsat 603 communications satellite by hand, installed a new rocket motor, and released it to operational use. Then when Endeavour returned to Earth, it performed the first landing with the assistance of a drag chute.

Endeavour made history again on September 12, 1992 when it launched on the fiftieth space shuttle flight. Mae Jemison, the first African American female astronaut, was aboard; and Mark Lee and Jan Davis became the first married couple to fly in space together.

The author describes many dramatic moments of the program such as the STS-37 mission of Atlantis in April 1991. The crew launched the Compton Gamma Ray Observatory, but then had to perform an unscheduled EVA to release a stuck high gain antenna to save the multimillion dollar observatory.

One of the most sought after missions by the astronauts was STS-61, the first servicing mission to the Hubble Space Telescope. Endeavour launched on December 2, 1993 to rendezvous with Hubble 600 miles above Earth to fix its bad vision and restore prestige to the U.S. space agency. The astronauts installed new gyroscopes, solar array drive electronics, magnetometer covers, the Wide Field Planetary Camera 2, and COSTAR (corrective optics space telescope axial replacement). After five EVA’s, totaling 35 hours, the astronauts released the improved Hubble to record some of the most stunning images ever observed. In recognition of their successful efforts, the crew received the coveted Robert J. Collier trophy.

Evans expertly tells the story of the launch and assembly of Russia’s Mir space station. He provides a comprehensive account of the missions and occupants of Mir, including many foreign cosmonauts. By 1993, the station was plagued by constant maintenance and repairs which were required for it to remain habitable. These duties reduced the number of experiments and scientific observations conducted. There were many dramatic moments aboard Mir such as the Russian EVA to replace a damaged airlock hinge which was never designed to be worked on in space. Then in January 1994, the departing Soyuz TM17 hit the station twice after experiencing control problems. Luckily only scratches were left behind.

This next-to-last volume in the series is comprehensive in its coverage of every space shuttle and Soyuz mission of the era. The details of the satellites launched, experiments run, and EVA’s performed are tremendous. From the Spacehab, U.S. micro gravity laboratory, and wake shield facility, to the first EVA test of the Simplified Aid For EVA Rescue (SAFER) system, the author did not miss an event. Evans has accomplished another monumental achievement in his quest to chronicle the “History of Human Space Exploration.” Finally, in a tantalizing foreshadow to his last volume, this book concludes with the Soyuz launch on March 14, 1995 carrying American Norm Thagard to Russia’s Mir space station, beginning a lasting Partnership In Space.