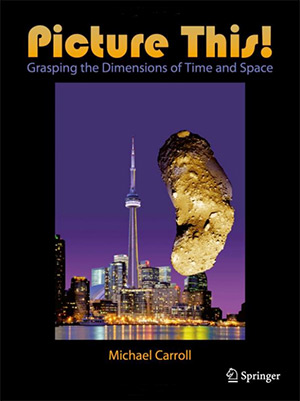 The universe is really big. Size, distance, and time measurements in astronomy are literally astronomical. This book tackles the problem of comprehending such enormous values in a novel way. It uses familiar objects or time frames to create a sense of scale that helps the reader visualize the sizes and the distances between extraterrestrial bodies and structures ranging from asteroids to galaxy clusters.

This device makes Picture This! a very understandable introduction to astronomy. The author, Michael Carroll, describes the development of the universe over the vast time span of 13 billion years or so. Readers learn how galaxies, stars, planets, and comets form. The descriptions of the planets and moons in our solar system vividly show how distinctive all of those bodies are. We learn that even asteroids can differ remarkably from one another.

Carroll introduces comparisons of scale in two ways: textual and graphic. For example, in speaking about Earth’s unique process of plate tectonics, he says the plates move “at about the rate that the human fingernail grows.” In another chapter, he describes an imaginary car trip from Earth directly to Pluto at its average distance, a trip that at a constant speed of 100 km/h (62 mph) would take 6,307 years.

But the most striking aspect of this book is the composite photographs the author created to demonstrate scale. One image shows the asteroid 2005YU55, which passed nearer the Earth than our Moon’s orbit in 2005. Astronomers had described the asteroid as being “as long as an aircraft carrier,” which only conveys one of its three dimensions. Carroll’s composite photo of the nearly round asteroid hovering above the aircraft carrier USS Ronald Reagan, casting a shadow over most of the ship, makes that comparison much more meaningful.

Another photograph shows a to-scale image of Saturn and its rings placed between the Earth and the Moon, illustrating how it would cover 60 percent of the distance. In another, Mars’ Victoria Crater dwarfs an image of the Roman Coliseum.

Most of the book examines the various bodies and structures of the cosmos, ranging from meteors that enter the Earth’s atmosphere to planetary nebulae and galactic clusters at the edge of the visible universe. The final three chapters delve into somewhat different notions. “Understanding Scale in the Universe” describes several physical scale models of our solar system that have been erected in places around the world. They range in size from one-third of a mile (in Colorado) to 186 miles (in Sweden). “The Worlds Around Us” presents a brief history of man’s understanding and visualization of the planets in our solar system. Finally, “Space Travel” describes the history of man’s ideas for how to travel to other planets, from the early 1900s to today’s plans for expeditions to Mars.

Without getting bogged down in technical jargon, Michael Carroll explains complex astronomical objects and systems in terms lay readers can understand and visualize. His incorporation of the history of astronomers’ understanding of the universe demonstrates the increasing power of tools of observation. For example, he wrote that Voyager’s 1986 fly-by of Uranus “left us with a portrait of a cold, distant world simmering in serenity.” By 2007, using the Hubble Space Telescope, “astronomers were tracking more clouds than Voyager saw during its entire encounter. Bands became well-defined, and dark storms lapped each other around the planet, merging into larger storms.”

Picture This! is well formatted. Its wide margins keep the text to an easy-to-read size and provide space for explanatory footnotes. The photographs are almost three-dimensional in their clarity. Readers who are most comfortable with measurements in miles and degrees Fahrenheit might want to have a conversion calculator handy, as the book uses the metric system almost exclusively.