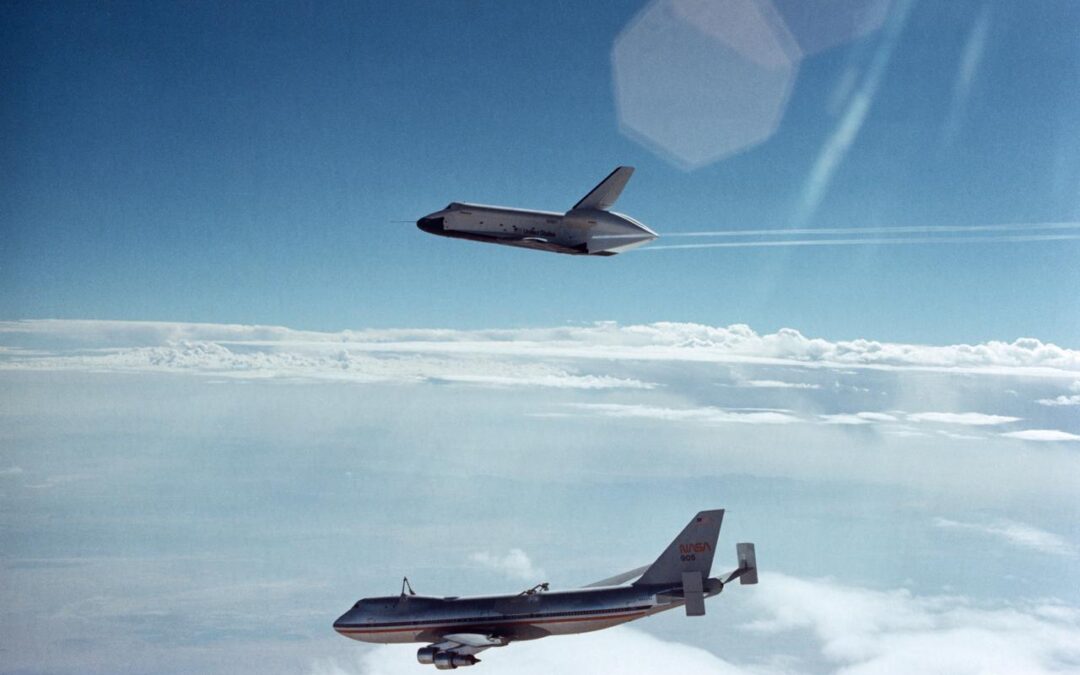 A book in the works for several years by Retro Space Images’ J.L. Pickering (who supplied the fantastic Kodachrome visions in this blog’s recent 3rd Century America article) and veteran space reporter John Bisney was just released, and it was more than well worth the wait. Picturing the Space Shuttle: The Early Years, published by the University of Florida Press, contains a wealth of many never-before-seen photos and images that encompass the Space Transportation System’s formative years. Here, we see a Space Shuttle that doesn’t just start with STS-1, Columbia’s first orbital flight that launched on April 12, 1981. We see the program’s development that begins as the Apollo lunar missions are still in full swing, and how that development spans in starts and fits throughout the 1970s and early 1980s. 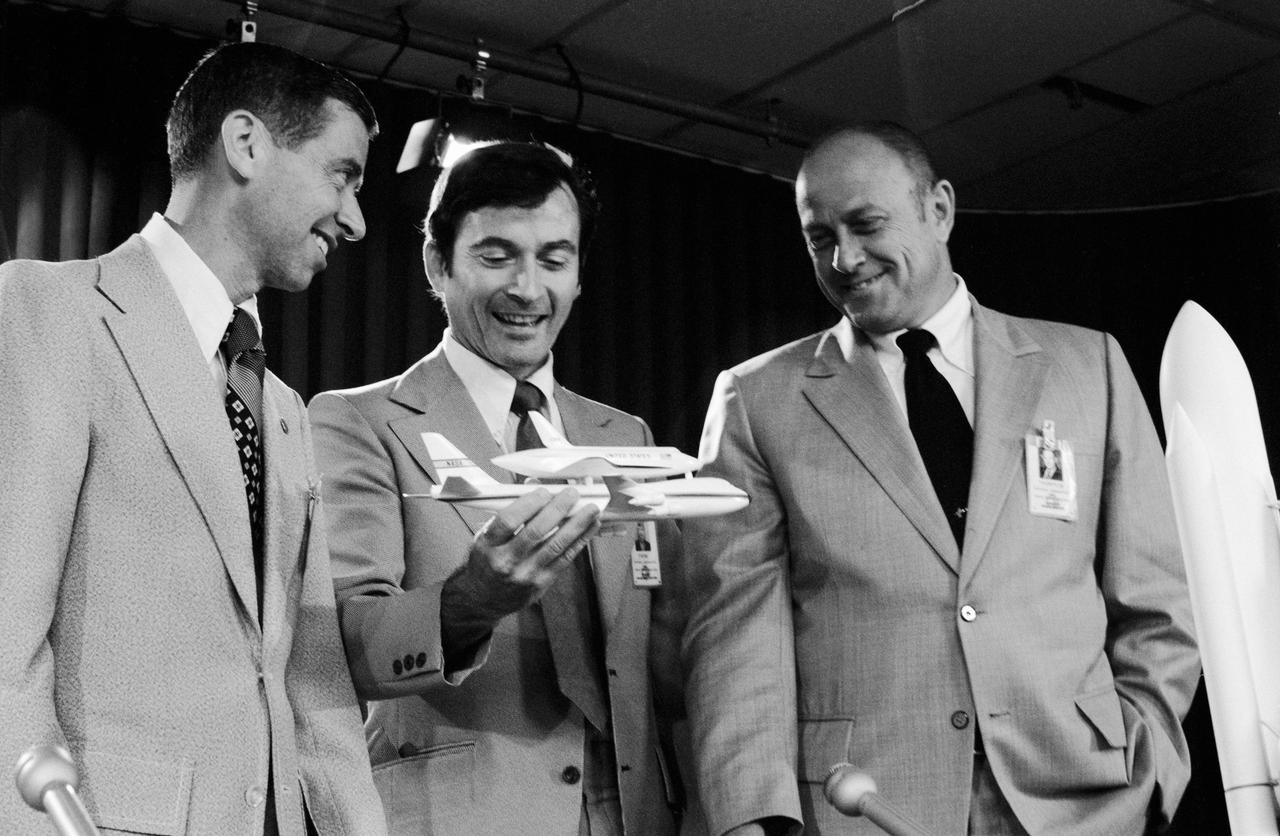 The book is divided up chronologically, and in its beginnings showcases the (sometimes comical) Shuttle concepts that were seriously up for consideration circa 1969 through 1972, when NASA was seeking its next big program after Apollo. Here we see all types of orbiters perched atop Saturn stages, and various contractors’ visions – Lockheed here, Grumman there – of what the Shuttle could’ve been.

As the decade rolled on, the definitive design was locked in, but serious issues – including perfecting the orbiter’s RS-25 engines, and the Thermal Protection System’s tile bond process – kept the Shuttle from launching during the 1970s (the vehicle was supposed to get into orbit by 1978). The book addresses these setbacks with its copious photos and text, showing the incredulous faces of first orbital flight crew John Young and Bob Crippen at a press event when Columbia arrived at Kennedy Space Center in March 1979, sans many of its heat shield tiles. As Young said years later, “The Shuttle wasn’t even finished yet.” One gets the sense that even those most dedicated to the program thought only magic would get the Shuttle finally flying. 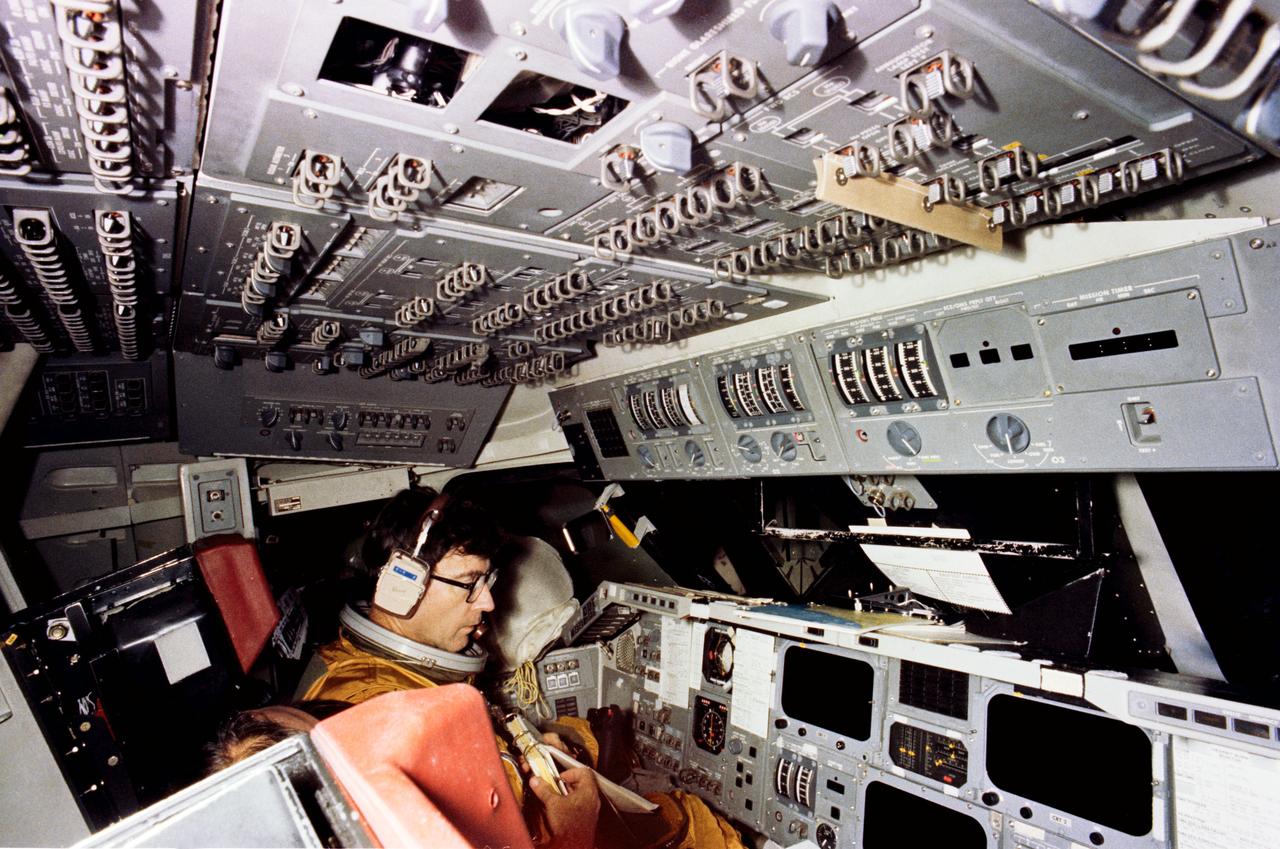 “S79-37006 (29 Sept. 1979) — Astronaut John W. Young, commander of STS-1, goes through a simulation exercises in the shuttle mission simulator (SMS) in the mission simulation and training facility at NASA’s Johnson Space Center (JSC). Young and astronaut Robert L. Crippen, prime crew pilot, are in training for the first of series of orbital test missions aboard the Columbia. Photo credit: NASA”

However, those delays didn’t mean the Space Shuttle didn’t get off the ground during the 1970s. Picturing the Space Shuttle is one of the few books that acknowledges the 1977 Approach and Landing Tests (ALT) program, and boy, it doesn’t disappoint. Seeing Fred Haise – who historically should be considered the first Shuttle commander, not to diminish Young but to rightfully acknowledge his role in pioneering the program – and pilot Gordon Fullerton busy in Johnson Space Center’s Orbiter Aeroflight Simulator, climbing up into Enterprise via cherry picker, and ultimately flying Enterprise despite an early General Purpose Computer failure is truly a thing of joy. Of course, Joe Engle and Richard Truly – who also flew Enterprise during the tests, and launched aboard the second orbital flight – are well-documented photographically, too. You’ll find yourself pulling for the Enterprise crews, just like it was 1977 all over again.

And of course, by the time the book reaches April 1981, the reader is alternately stressed and excited to see Young and Crippen finally make it to space, even though we know how that story ends. Despite losing tiles on the orbiter’s OMS pods, Columbia made it back to Edwards Air Force base on April 14, wrapping up a successful maiden voyage and, in author Tom Wolfe’s words, “closing a circle.” 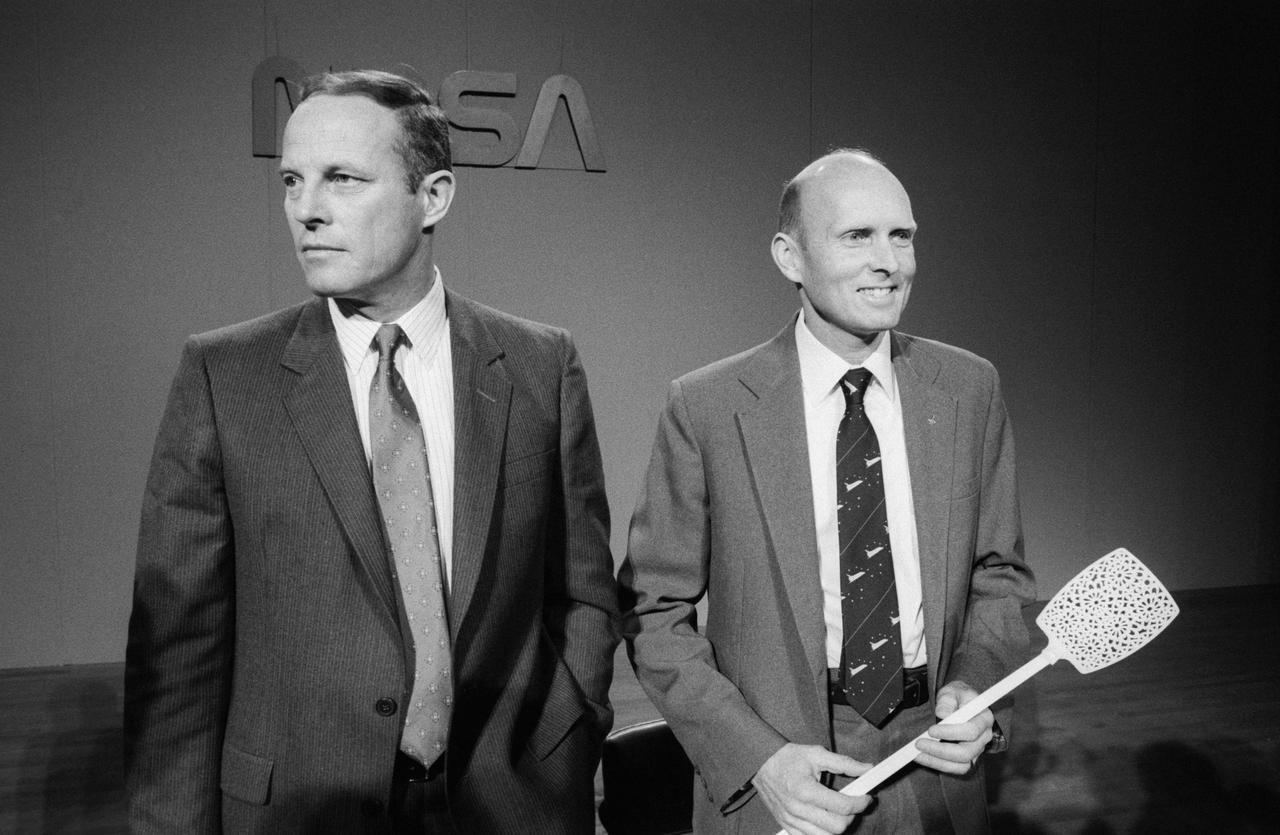 “S82-27685 (26 Feb. 1982) — Astronauts Jack R. Lousma, commander, and C. Gordon Fullerton, pilot, enjoy a light moment following their final STS-3 press conference before the scheduled launch of the space shuttle Columbia. Fullerton holds a fly swatter in his hand. During the conference, the crew had joked about insects onboard the craft and suggested the swatter as a means to control the critters. A student experiment entitled ‘Insects in Flight Motion Study’ will fly with the crew on NASA’s third orbital fight test (STS-3). Photo credit: NASA”

The Space Shuttle program may have ended with Atlantis’ twin sonic booms over KSC’s Shuttle Landing Facility over a decade ago, but in many ways, its legacy is still being written. Many arguments have broken out on social media questioning the program’s usefulness versus its riskiness, and often the Shuttle has been compared to, say, Apollo, which seems rather unfair since both programs had completely different objectives. Despite all arguments, Picturing the Space Shuttle is a rich, moving visual document, illuminating how the Shuttle revolutionized space vehicle development at a time when NASA needed something new, exciting, and truly revolutionary; while the program is over, its resonances are still very much felt. Let’s hope for another installment of this book series that showcases the Shuttle’s “middle” years.

Picturing the Space Shuttle is available for purchase via the University of Florida Press’ website, and via Amazon.