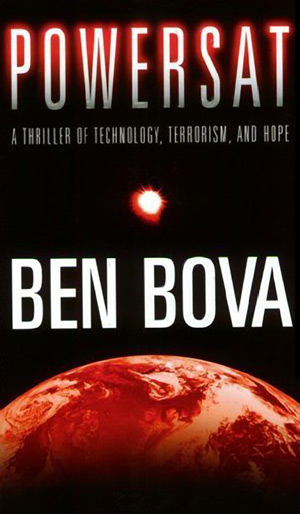 Ben Bova’s popular Grand Tour series of novels details humanity’s adventures in the near future, exploring and settling the solar system. After writing about Mercury, Venus, Mars, Jupiter, Saturn, the Moon, and the asteroids, Bova finally got around to writing about Earth. Set in the near future, Powersat follows astronaut-turned-businessman Dan Randolph as he tries to put Earth’s first production solar power satellite (SPS) into operation. Middle-Eastern terrorists, international oil companies, and eco-Luddites all want to see him fail, while NASA and the rest of the Federal bureaucracy are not particularly keen to see a private company do what they could not. Randolph has an ally in Senator Jane Thornton, an old flame, who is now running the presidential campaign of Morgan Scanwell, the governor of Texas.

A dramatic spaceplane breakup on reentry looks like a malfunction on its first piloted orbital flight, but turns out to be sabotage by a terrorist cell with powerful backing from oil billionaire Asim al-Bashir. Al-Bashir finds common cause with an American oil baron, who is unaware his plans for Randolph’s power satellite go far beyond merely destroying it. Al-Bashir’s intent is to use the satellite to strike a mortal blow against America, and as a side effect, kill the idea of power satellites forever.

More a techno-thriller in the mold of Tom Clancy than a classic science fiction novel, Powersat has engaging characters with complex relationships that affect the way they deal with the challenges they face. Strong women play key roles and have a major effect on the outcome. Tension builds steadily throughout the story as the stakes rise higher and higher, climaxing 22,236 miles above the Earth.

One thing I liked about this novel is that it holds up for examination some of the aspects of solar power satellites that proponents of SPS usually do not talk about. One such aspect is the political power of groups that would not like to see a viable competitor of oil arise. Another aspect is how to protect a gigantic machine, stationary in the sky like a sitting duck, from hostile acts. A final question is whether it is really possible to channel the multi-gigawatt microwave beam from the satellite into a killing death ray. If so, how could this be prevented?

Aside from providing an engaging read that pulls you in, Bova is also scrupulously accurate in the technical details of spaceplane reentry, what a Soyuz (yes, Soyuz!) launch feels like, and spacewalks on a large orbital structure. The one place where he waves his magic wand is in the area of cheap access to space. Somehow Dan Randolph’s company is able to build and maintain an acres-wide solar power satellite in geosynchronous orbit (GEO), using spaceplanes on solid rocket boosters to low-Earth orbit (LEO) and orbital transfer craft from LEO to GEO. How the economics of this transportation system relates to the cost of the power beamed from space is never discussed.

Powersat hits on all cylinders. There are characters to identify and empathize with. There are villains to despise. There is high tension and real danger. There is accurate description of space hardware and what it is like to use it. There is even a scenario that might give people pause about the wisdom of putting an extremely powerful energy source directly over their heads. There is definitely food for thought.