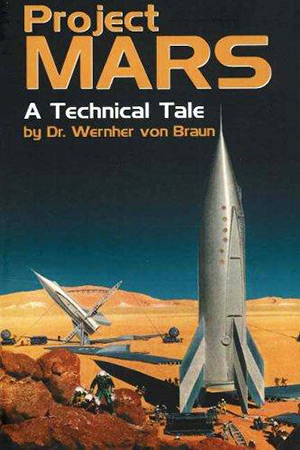 Many aspects of Project Mars make for interesting reading because this work of fiction reveals not only Wernher von Braun’s passion for space flight, but also his philosophy on life. The story, set a little more than 30 years from when it was written in the late 1940s, uses the rocket technology of the V-2. Von Braun exploits rocket science of the late 1940s to implement a journey to Mars, with hypergolic fluids as the principle propellants. In that respect, it is not so much an exercise in fiction as it is in wishful engineering. He does assume startling changes in world politics — a one-world government following a successful all-out nuclear war with Russia.

The story is about a mission to Mars that takes place after an orbiting telescope (a la Hubble) has confirmed that the fabled canals of Mars are real. There must be life on the red planet! Von Braun notes that the massive project would receive support from the military-industrial complex for which there is no longer a need now that wars are “obsolete.”

Von Braun envisioned an Earth orbiting space station, called Lunetta, as a critical defense asset from which nuclear bombs could be dispatched to the enemy: the means by which the United States destroyed the Russians in his fabled World War III — a capability that has, thus far, not proved advantageous in the real world. It is from this space station that the Mars flotilla (as he calls it) is assembled.

He uses various events and characters to educate the reader about the Martian environment. Descriptions of the hi-tech aspects of a trip to Mars are sometimes tedious. The many calculations von Braun had to accomplish with a slide rule — an analog mechanical calculator virtually unknown in today’s engineering world — are contained in an extensive addendum to the book.

Two characters have a relationship close to that of von Braun and his boss at Peenemünde, Walter Dornberger — the former described as having a “pestilent fantasy and furious creative drive,” the latter as his “balance wheel” and “engineering conscience.”

In von Braun’s account, the largest expenditure of the two billion dollar project is the transport (or “freighting” as he calls it) of the expedition spaceships into Earth orbit, which he estimates would require perhaps 1000 launches by a fleet of Shuttle-type vehicles. Brief forays into orbital mechanics might have lost a few readers of that era, but space aficionados of today should have no problem. One chapter includes a few short notes on theological evolution — the establishment and advancement of life by intelligent design of the creator.

Although the ten-ship Mars flotilla and crew of 70 have a life support system that reclaims water from the spaceship environment and urine, it does not provide potable water, all of which was brought with them. Several possible hazards are examined to include cosmic rays and weightlessness as well as boredom and interpersonal relationships on the long voyage. His understanding of contemporary physics, biology and several other scientific disciplines is impressive, though he acknowledges six scientific authorities who provided assistance in the book’s creation. His desire to prove that the mission is feasible with existing technology often drives him beyond simple explanations, laboring the essence of the story line. His vision of the ease of recovering and refurbishing the reusable boosters, for example, is either naïve or an exercise in wishful thinking. However, he also envisioned huge Assembly Sheds to allow the erection of four complete spaceships, the same number as the Vehicle Assembly Building for his Saturn V provided 15 years later.

Great care was taken to describe the mid-course maneuvers of the convoy, as von Braun left virtually no technical stone unturned. Space walks use “reactive pistols” to move around, reminiscent of astronaut Ed White’s EVA in 1965. Electrical power is produced with turbo-generators powered by solar heated boilers — in the era before solar cells and radioisotopic thermoelectric generators.

Three “landing boats,” as the spacecraft that will descend to the Martian surface are called, are enormous flying wings that glide to a Shuttle-like landing. This concept was borrowed for the 1955 science fiction movie Conquest of Space.

Because it is assumed a race of intelligent people inhabit Mars, the landing party has a series of gifts reminiscent of the early explorers into the New World who wished to placate the natives. With the crew’s arrival on Mars and their meeting with the Martians, von Braun’s imagination goes into high gear although the “little green men” turn out to very human-like and verbal communication is quickly established.

Organ transplants by the Martians elicit comments by the earthlings that perhaps science has gone “too far.” This is just one of many aspects of ethics, politics, economics, and religion that are examined. Among all the varied topics, von Braun even finds a place to reveal his views on sex education (almost unheard of 60 years ago) and respect for the “divine mysteries of the propagation” of life.

Von Braun lectures the reader, through his Martian protagonist, on both the challenges of technology and its responsible use. He emphasizes the importance of ethics and morality in an ever more scientific and technology based society — and the importance of humility and a belief in the presence and influence of God.

In a novel that spans only 120,000 words, the amount of detail and subject area is amazing. People with knowledge of the state of rocket technology of the late 1940s and familiarity with von Braun’s life (such as detailed in Michael Neufeld’s biography Von Braun) will especially appreciate this book.

Although the entire book was written between 1948 and 1949, only the book’s technical appendices were published in 1952 in their original German, and appeared the following year in English from the University of Illinois Press. The story itself was not published until it was resurrected by Apogee Books in 2006. What makes this edition a collector’s item is not just the story, but the eight pages of color paintings of the expedition by famed artist Chesley Bonestell.

The English translator, Lt. CDR Henry J. White (USN), used such obscure words to render von Braun’s Teutonic vocabulary that the reader may need to check the dictionary every few pages. Also, common terms like “rendezvous and docking” or even “station-keeping” are conspicuous by their absence because von Braun uses his own lexis to describe these events. Anachronisms abound — such as the absence of digital clocks, so a sweeping second hand performs the countdown. I grinned a bit when the main protagonist arrives home and manually opens and closes his garage door.

The Mars Project was an obvious effort to sell the American people on not only the idea of space travel but also some of his political and philosophical thoughts, which are implanted throughout and come to an interesting conclusion at the end. In Neufeld’s biography, he described von Braun as having a “strong tendency toward technological utopianism” — an astute observation.

Project Mars is a very interesting and enthralling read. I highly recommend it.