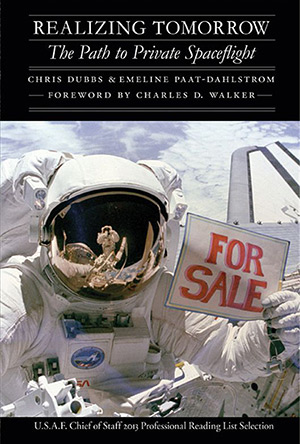 Looked at one way, this book is a chronicle of half a century of heartbreaking, abject failure.  Despite decades of trying by a lot of really smart, fanatically dedicated people, the goal of commercial human spaceflight remains unfulfilled.  Yes, there have been a handful of “spaceflight participants” who bought tickets to orbit on government rockets at a starting price of $20 million (anyone buying a ride with Space Adventures today will pay almost twice as much as Dennis Tito did in 2001 — the ticket price is moving in the wrong direction).  Yes, Burt Rutan put a marker down when he sent the first humans into suborbital space in a privately financed rocketplane. But here we are at ten years and counting after Rutan’s X-Prize-winning flights, and we still haven’t seen the first “spaceline” sending paying passengers into space — even suborbital space — in its own spacecraft.  XCOR’s Lynx hasn’t even taken its first test flight, and as for Virgin Galactic… As VG’s CEO George Whitesides has said many times: “Space is hard.”

But the story’s not over yet, and while we wait for the success we believe is inevitable, it’s well to review the stories of our pioneers, both for inspiration and for lessons learned. The first lesson is that “No bucks, no Buck Rogers” isn’t just a catchy line from a movie; it’s the God’s honest truth, as much a part of the fundamental rocket equations as Newton’s Third Law of Motion. The reason so many readers of this book will recognize the name Burt Rutan but won’t have heard of Robert Truax is that Burt Rutan had Microsoft cofounder Paul Allen to bankroll Spaceship One, and Truax didn’t. Truax might have sent the first private citizen into space twenty years ahead of Rutan. A former design engineer at Aerojet-General, he bought some surplus vernier engines for the Atlas missile. They originally sold to the government for $70,000 apiece; Truax got them from a scrapyard for $25 each. Clustered together, they could have sent his Volksrocket into space in the early 1980s. But even shoestring budgets need a shoestring, and Truax spent all his time in unsuccessful fundraising.

The second lesson is that even though it takes money to build rockets, it takes less money than years of watching NASA and other government space programs have conditioned most people to believe. Burt Rutan built Spaceship One for $20 million. The cost estimates for a NASA contract to build something similar were ten times that amount. A decade earlier, the DC-X project produced a prototype single-stage-to-orbit vehicle on a budget of only $60 million. DC-X was a government contract, but it was built with a small team on a tight deadline, and focused on using off-the-shelf parts rather than developing new technologies.

The third lesson is that money isn’t enough if you have to fight the government as well as the law of gravity. Telecom multimillionaire Walt Anderson had enough money left over after sinking $40 million into Roton (another failed private spaceship) to fund MirCorp, a company dedicated to rescuing the Russian space station Mir and turning it into a commercial laboratory and tourist destination. He might have succeeded, except for the adamant opposition of the U.S. government, who wanted Mir at the bottom of the ocean so as not to have any competition for Russia’s attention in its International Space Station partnership. MirCorp managed to send the first privately funded orbital expedition of two cosmonauts to Mir, and Anderson’s team had a solid business plan. But they had no chance to execute it; NASA prevailed, and Mir was deorbited.

Readers may find other lessons here. But this book isn’t a manual or textbook of rules for the best approach to private spaceflight. It’s a chronicle of the personalities and struggles of our movement’s pioneers. NSS readers will find many names and projects with which they are long familiar: Gerard O’Neill, Mark Hopkins, George and Loretta Whitesides, Charlie Walker, the X-Prize, Virgin Galactic and Bigelow Aerospace. And they will also find the stories of many other pioneers and visionary designs that they’ve probably never heard of: Per Wimmer, Brian Feeney, Ken Davidian, Pat Bahn, Sea Dragon and Conestoga. It’s an impressive and inspiring survey. And let your heart not be troubled by all the failures along the way. As the poet said, “After the final no there comes a yes. And on that yes the future world depends.”