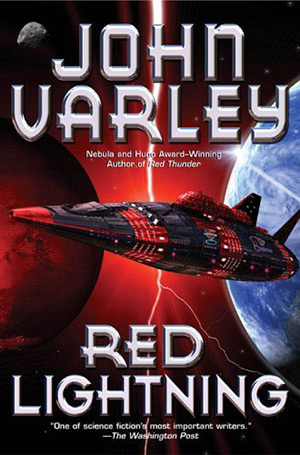 Twenty years after the events chronicled in Varley’s Red Thunder, the solar system is a very different place. Manny Garcia and Kelly Strickland have married, had two children, and moved to Mars to operate the Red Thunder Hotel. Mars has become a major tourist destination, served by squeezer-powered interplanetary cruise ships such as the Royal Caribbean Sovereign of the Planets. For this sequel to Red Thunder, the point of view character is teenage Ray Garcia-Strickland, a fairly typical Martian kid, despite the fact that his famous parents were members of the first crew to land on Mars.

Ray, like teenagers everywhere, is not totally enamored with his life on Mars, although he is convinced that life on Earth would be even worse. He has to confront life on Earth sooner than he would like when a large object traveling at nearly the speed of light strikes the Atlantic Ocean, launching a tsunami that devastates the islands of the Caribbean and the entire East Coast of the United States. Ray’s grandmother owns and operates a beachfront hotel in Daytona Beach, Florida, one of the hardest hit communities. Ray, Manny, Kelly, Ray’s sister Elizabeth, and Ray’s girlfriend Evangeline book passage to Earth on the Sovereign of the Planets to do what they can to rescue grandma. The devastation they encounter is graphic, informed as it is by Varley’s study of the Sumatra earthquake and subsequent tsunami of 2004. In this case, however, the damage and loss of life is far greater.

Although the damage caused by the tsunami was horrific, things were about to get worse. Ray’s “Uncle” Jubal Broussard thought the disaster was his fault and disappeared, setting off a chain of events that put powerful groups on Earth in conflict with each other, with Mars, and particularly with Ray’s family. The shadowy quasi-governmental groups trying to capture Jubal would stop at nothing to find him, and Ray’s family, particularly Ray himself, was believed to be the key to locating him.

Red Lightning, informed as it is by 9/11, the Indian Ocean tsunami, and the recent erosion of freedoms in America in the name of Homeland Security, paints a dark vision of the future, but with rays of hope (Rays of hope?) personified by courageous individuals such as Travis and Jubal Broussard and every member of the Garcia-Strickland clan. Like Red Thunder, this book is very reminiscent of the work of Robert A. Heinlein. Independent-minded people summon inner strength to break out of the control of a society that is becoming progressively more constricting. Will virtue triumph over the forces of evil? Maybe. The battle is never completely won.

NSS Featured Review for May 2007