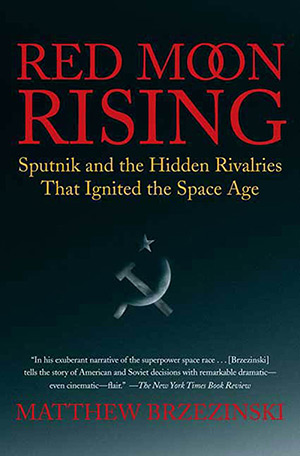 Red Moon Rising by Matthew Brzezinski captures the essence of the opening of the Space Age and is a very enjoyable read despite occasional technical inaccuracies. The book opens by setting the stage for the coming space race. It details the importance of the German developed V-2 as seen from the perspective of both the United States and the Soviet Union in the closing months of World War II. The author portrays the frenzy of activity by both of the victors to plunder the technology of the Third Reich with a degree of verbal theatrics that added interest. However, sometimes his desire to give life to what might otherwise be rather lackluster events may cause the reader to wonder. Although Brzezinski acknowledges that the historical record is rather “sparse,” he nonetheless provides detailed quotes and occasional facial expressions to highlight his oft-theatrical prose.

Brzezinski presents a stunning portrait of the Soviet communist regime of the 1950s with periodic flashbacks to earlier decades. He pulls no punches in conveying the terror of that period. His descriptions of the initial efforts to generate satellite programs for both countries tracks the established chronology but his insight into the workings of Soviet politics gives interesting twists. He engages the reader in this way throughout the book, making for entertaining reading. The narrative becomes somewhat convoluted at times when technical issues are described. This tends to highlight the author’s political savvy as opposed to his lack of knowledge of basic rocket science.

The author undoubtedly has an in-depth knowledge of the Soviet Union and its communist political organization as well as the personalities of the time — principally Soviet Premier Nikita Khrushchev. The insights he brings to the historical record are profound.

Brzezinski presents an evenhanded portrayal of both Wernher von Braun and Sergey Korolev — providing just enough of their biographies to establish their personal motivations and their roles in engineering the technology. He factually relates the controversies that surrounded their lives.

The technical inaccuracies (some trivial, some more serious) tend to discredit an otherwise well written discourse. For example, on page 3, the author states with respect to the V-2, “Vanes in its four tail fins adjusted trim, pitch, and yaw aided by heat-resistant graphite rudders that directed the flow of its white-hot gases.” Those of us with pilot training (I’m a certified flight instructor) know that the three axes of control of an aircraft or rocket are “roll” pitch and yaw — not trim. And, from my own research on rockets (I’ve written three books on space flight), I know that the vanes themselves, although attached to the fins, were the “heat-resistant graphite rudders” mentioned. There were also small aerodynamic control surfaces on each fin. The author apparently confused the two. Other technical errors involved the workings of the R-7, the Vanguard, and the Corona spy satellites.

Although I didn’t stop reading to check every fact, from my knowledge of history I also noted some errors in dates and locations. On page 90, the author writes, “The Redstone performed flawlessly during its 1953 tests.” The only Redstone test in 1953, RS-1 on August 20th, was listed as a failure due to a control system and powerplant malfunction. Another page had some mountains 150 miles farther south than they actually are. This basic problem continues through the book although the author made a considerable effort to provide citations.

Brzezinski does a masterful job of conveying not only the political, but also the social mood of both countries, in describing the impact of the launch of Sputnik I and II in the fall of 1957. For those who lived through the era, the author captured the fundamental nature of the media feeding frenzy and the congressional response that came close to bringing down the Eisenhower presidency.

Likewise, the author very effectively illustrates how the Democrats seized the moment to advance their own political agenda by intentionally feeding disinformation and outright distortions. He correctly relates that both President Dwight Eisenhower and Khrushchev had taken substantive steps to reduce their military spending. Now this new arrival — Sputnik — would inflame the rhetoric on both sides. It was a classic example of unintended consequences resulting in an expensive new level of spending on the arms race and leading to an escalation of the Cold War.

The author’s most effective revelation however, is the skillful manner by which Senate Majority Leader Lyndon Johnson nourished the alleged missile gap for his own political ambitions. While this is not the first time a politician had put his career ahead of the welfare of the nation, it raised the stakes and contributed to the questionable expansion of the Cold War and the almost frantic stockpiling of nuclear weapons.

The author also recreates the feeling of the times as to how the “mastery of space” could allow the Soviets to control the world. Science and technology were seen as more sinister ingredients in world power politics.

There are many high points in the book. One in particular relates the frustration and stress placed on the rocketeers of those hectic days. The author describes the last week of January 1958 when both Vanguard and Jupiter-C teams worked tirelessly to attempt to launch America’s first satellite.

The Epilogue is exceptionally well done in closing out the book and establishing a final assessment of the era. Brzezinski’s treatment of the principals is summarized and reflects well on Eisenhower (in particular) on whom events of the time had lain heavily. Red Moon Rising is a good addition to any library!