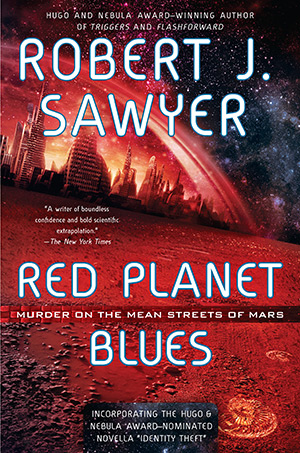 In the best noire 40s mystery style, Red Planet Blues opens with a gorgeous woman entering private detective Lomax’s office, asking for help. Only this is no ordinary woman. She’s an android with a human being’s mind, called a “transfer.” Her husband has disappeared. The detective finds this highly unusual given that this takes place in the only colony on Mars, a domed city called New Klondike, with few places to hide.

As Lomax investigates, we learn that New Klondike was populated by prospectors who rushed to Mars after fossils were discovered by a private mission. The discoverers burned up on Earth reentry and the location of the prime fossil bed died with them. Subsequent prospectors have only found shards of fossils, from which they barely eke out a living. Many have used their meager earnings to become transfers, and thus have the ability to spend weeks out hunting for the lost fossil bed without the need of cumbersome spacesuits.

Murder, intrigue and action abounds when it seems as if everyone, including Lomax himself, tries to discover the location of the fossils in order to strike it rich. And even though the book’s subtitle is Murder on the Mean Streets of Mars, the flurry of activity takes place both within the dome and outside on the giant impact crater Isidis Planitia, where the dome is built. A plethora of strategies are used by human biologicals and android transfers as they ambush each other in their attempts to steal clues and outwit everyone else in order to get sole possession of the fossils.

I was surprised when an antiquities dealer mentions to Lomax that finding the lost British Mars probe Beagle 2 would also net a prospector some good money. “A British Mars probe?” I thought. But a Google search confirmed Beagle 2 was a probe of the European Space Agency’s 2003 mission that was lost as it headed to Isidis Planitia. Sawyer had done his homework about Mars. I also learned about the three geologic ages of Mars: the wet Noachian (coined by Schiaparelli for Noah and the Flood), the volcanic Hesperian, and the present-day cold and dry Amazonian. The trilobite-like fossils in the novel are from the Noachian era.

The novel is chock full of references based on science fiction stories and old movies, and I am sure I did not catch all of them. Perhaps my favorite was that the local watering establishment, where water ice is more expensive than dry ice, is aptly called Bar Soom as a nod to Edgar Rice Burroughs’ name for Mars.

One interesting difference in this novel over others is that the first 86 pages is the complete and very excellent Hugo and Nebula Award-nominated novella Identity Theft. That in itself is worth the price of the book. The rest of the novel then picks up the action two months later. Be warned, however, that some parts are a bit violent, as even android transfers can be tortured to extract information. Also, detective Lomax would be a candidate for every sexual harassment lawsuit on Earth, if he was here, as he has no qualms on commenting about the assets of every female biological and transfer he meets.

The novel becomes a bit complex near the end, and it had me wondering if there was anyone on Mars who wasn’t after the fossils. It does come to a satisfying conclusion, and all the mysteries are solved. I found Red Planet Blues a great merger of science fiction with the old style detective genre, and I thoroughly enjoyed it. I also thought that it provided an interesting take on what a colony based on a ‘Great Fossil Rush’ to Mars could be like.