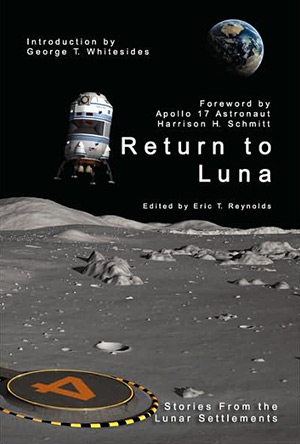 In 2008, the National Space Society and Hadley Rille Books cosponsored a short story contest about human lunar settlement called “Return to Luna.” The winning stories were chosen by a panel of award-winning authors and editors, and have been published in the Return to Luna anthology.

The grand prize-winning entry of the 2008 Return to Luna short fiction contest was “Visual Silence,” written by M. C. Chambers. Contestants had to follow strict guidelines set out by the publisher. In addition to well-written, tight prose with good character development, writers had to craft a realistic story about human lunar settlement that takes place 50 to 100 years in the future.

This is a tall order, especially for a short story. With “Visual Silence,” M. C. Chambers delivers a technically well-grounded lunar rescue story. The narrative closely resembles a “police procedural” or an episode of “Emergency!” When a lunar rover goes MIA, Chambers walks us through the technical necessities and considerations of a lunar colony faced with a difficult rescue mission, and details the sorts of technologies it has on hand to do so. Some of the nice touches in the story include computer-fed glasses (or visors) that provide security personnel with a wrap-around, heads-up display and other electronic gear that allows individuals to “see” in radio, radar, and other wavelengths. There is also a “Safety and Security System,” amusingly called “SafeSecs,” which keeps track of all settlement residents.

Chambers also provides the reader with good descriptions of the lunar surface: “The moonscape they viewed was lit by the low sun of the long lunar dawn. The jagged rocks at the rims of craters gleamed like gilded crowns, and cast long black shadows that echoed the black of the sky. Unchanging, untouched by life or death, pain or loss.” There is a faint air of Buzz Aldrin’s “magnificent desolation” in the prose.

The downside of a short police procedural-style story is that it is heavy on process and light on character development. The protagonist is deaf and communicates via computer, but doesn’t change much over the course of the story. However, there is an intriguing bit of a mystery to be solved, much like “Law & Order.” In short, this story will ring true with fans of reality-based dramas.

“Visual Silence” leaves the reader wanting to know more about the colony’s history, its layout, and its purpose. There is a brief reference to its politics, as when the author notes that certain curmudgeons chafe at having their whereabouts tracked by the SafeSecs system, but the story lacked real tension from that quarter.

M. C. Chambers hits all the preferred qualities of the Return to Luna contest. If you were to ask, “Could this really happen in the next 50 to 100 years?” the answer is, undoubtedly, yes. In that sense, one must say, “Mission accomplished.”