Book Review: Return to the Moon, by Harrison Schmitt 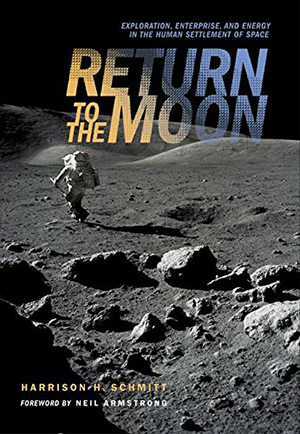 Over the past few years, bookstore and library shelves have become crowded with the memoirs and biographies of the United States’ early astronauts. In 2005 alone, at least three of the 12 moonwalkers to date told their life stories in print, either by themselves or with the help of authorized biographers.

The new book by Apollo 17 moonwalker Harrison H. Schmitt, Return to the Moon: Exploration, Enterprise, and Energy in the Human Settlement of Space, breaks away from the familiar territory of memoirs with a wealth of persuasive arguments for lunar exploration.

The last man to step on the lunar surface and the only professional scientist (he is a geologist) to do so, Schmitt uses his first book to set forth a detailed business plan for the settlement and exploitation of the Moon’s resources, drawing on his experiences as an astronaut, former senator of New Mexico and professor at the University of Wisconsin-Madison.

At the heart of Schmitt’s case is the promise of Helium 3 as a clean and powerful energy source that, while rare on Earth, is in abundance on the Moon. Schmitt has been a proponent of Helium 3 research and its fusion reactor development for more than two decades, working with his Madison colleagues to demonstrate its potential in laboratory demonstrations.

Schmitt builds a position for Helium 3 by first summarizing the projected energy needs of planet Earth over the next 50 years in terms of both existing fuel resources (e.g. fossil fuels and nuclear fission) and “out of the box” solutions, including hydrogen and space-based solar power. He devotes several chapters to the economics of lunar in situ utilization, detailing the rocket booster needed to get us there, the approaches to fusion power implementation, the geology of the Moon and mining requirements, and ultimately the specifics of settlement — down to employee selection, training and compensation.

Schmitt covers these topics so that the layman can understand them, and that the reader with more than a passing interest in the subject can appreciate them as well. Where Return differs from similarly themed books is in its latter third. After arguing that there are both economic and technological reasons to mine and settle the Moon, Schmitt turns his focus to how the project should be accomplished to insure success. “An understandable tendency exists in government and the media to concentrate on advancement of technology,” he writes; “however, management and leadership of the creation, integration, and operation of that technology is demonstrably even more important.”

Deconstructing the history in which he was an active participant, Schmitt explores the management decisions and lessons learned from Apollo. His review extends back to the beginnings of NASA and the early Mercury program, through the pad fire that claimed the lives of three of Schmitt’s peers, through modern space shuttle, X-vehicle and International Space Station programs. He focuses on the qualities he deems necessary to Apollo’s success, including the agency’s internal engineering capability, competitive design decisions and youth-injected workforce.

Schmitt next devotes 20 pages to sharing a series of e-mails he sent to White House staff and the Director of the Office of Management and Budget beginning in 2001, volunteering suggestions about “how NASA could be revitalized to potentially undertake Apollo-scale activities once again.” These discussions came just after President George W. Bush’s election and before Bush’s announcement of a Vision for Space Exploration in January 2004. The e-mails cover a wide array of topics. Schmitt compares NASA’s management to that of a corporate board, with the Administrator as CEO and the Advisory Board — for which Schmitt now serves as chair — as Board of Directors. He reviews the prospects of extending the orbital capability of the Space Shuttle, and considers the role NASA should play in space tourism (including the reactivation of the “Professional-in-Space” program that was canceled after the loss of Challenger).

These recommendations preceded the loss of the Columbia shuttle in February 2003, which Schmitt now acknowledges refocused NASA (with President George W. Bush’s direction) to the goal of returning to the Moon and going on to Mars. Still, according to Schmitt, it may not have done enough to enable NASA to succeed into the future.

It is therefore Schmitt’s contention that the best way to proceed with a successful return to the Moon is through a privately financed and managed program that focuses on near and long-term returns to its investors. He sets forth a schedule for the program so that its first profits would come from the spinoff production of diagnostic medical isotopes in the first five years and the establishment of a lunar settlement in the first 13 years. Other milestones of the private initiative would include lunar tourism and the extraction and delivery of lunar resource (e.g. hydrogen, water and oxygen) for outward space exploration, including manned landings on Mars.

Schmitt closes the book with a discussion of the laws and international treaties that would regulate a private lunar initiative, touching on mineral and property rights. Finally, he addresses the challenges to humans working on the Moon, briefly addressing topics that go beyond the biological issues facing future lunar residents — namely, the cultural, social and familial adaptations that will be necessarily for a permanent settlement to succeed.

There are readers who will no doubt disagree with Schmitt’s approach and conclusions about the viability of a future lunar settlement. Some may take exception to his contention that an investor-driven plan is the best approach or that, in the face of the technological hurdles we must still overcome, Helium-3 is as realistic a central goal as Schmitt believes it to be.

But as Schmitt’s former colleague Neil Armstrong advises in the book’s foreword, “Readers familiar with this subject will find a goldmine of information to review and analyze. Those to whom the concept is revolutionary will find Return to the Moon thought-provoking and exciting.” That it is. Schmitt’s vision of the near future is in many ways more inspiring than his past.