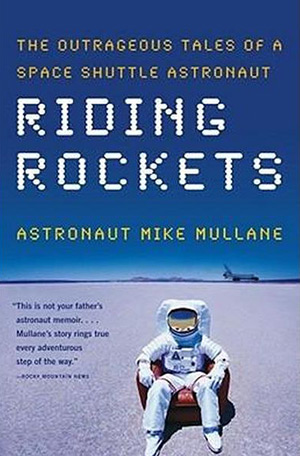 Of all the astronaut biographies published over the past 30 years, two stand far above the rest: Michael Collins’s enduring Carrying the Fire: An Astronaut’s Journeys and, now, Mike Mullane’s Riding Rockets: The Outrageous Tales of a Space Shuttle Astronaut. An alternate title for Mullane’s book could easily be The Sacred and the Profane, because the author, a former shuttle astronaut, delivers a no-holds-barred, take-no-prisoners peek inside—some would say a proctoscopic examination of—NASA’s astronaut office that is irreverent and occasionally blasphemous, yet engaging and spellbinding.

This is the shuttle astronaut book that space aficionados have been waiting for—a personal, eloquent account, enthralling from start to finish. Riding Rockets pulses with humor, and is at the same time honest in its anxiety and perceptive in its assessment of the people who ride rockets and fly a desk (that is, NASA management).

Through crisply dramatic storytelling, the author provides an unvarnished look inside the high-risk, high-voltage world of shuttle astronauts in orbit, on earth and as permanent residents of Planet AD (“Arrested Development”), where gallows and bathroom humor reign supreme. For the former military aviators in the astronaut corps, nothing and no one are immune from derision—and the more politically incorrect and sexually suggestive the taunts, the better.

Where else can you “snort” at particularly attractive women (as in “I want to snort her flanks”) and get away with it? Or use the shuttle manipulator arm and camera to give head-to-toe inspections of female colleagues, as Mullane remembers doing? And where else but in microgravity do you get a “morning” Viagra effect thanks to the redistribution of blood?

On orbit opportunities abounded for the Planet AD crowd. One shuttle commander, a particularly right-wing crewmember, ordered a countdown from a colleague—literally, “3, 2, 1, 0!”—in orbit so he could “squeeze … out a [fecal] muffin on that [expletive] Castro” as the shuttle passed over Havana. Another carried a sausage from breakfast into the toilet, then set it free to float around the cabin. As panicked crew members ricocheted from the walls in mad retreat, the astronaut grabbed the offending planetoid and, to the horror of all, wolfed it down.

To say that Mullane and the other Planet AD inhabitants were uninhibited is an understatement. They were living on the edge—seemingly impervious. Of course, some of the more conservative post-doctorate members and female astronauts weren’t so amused. According to the author, Sally Ride, the first American woman in space, carried a heavy feminist chip on her shoulder. But other female astronauts, like Judy Resnik and Rhea Seddon, shrugged it all off and gave as good as they got.

Just when the reader thinks that an astronaut’s life is a perpetual state of Animal House high jinks, though, Mullane jerks you back to a harsher reality where fear—terror, really— lurks, and fallible machines and unwitting bureaucrats can conspire to destroy. Above all, it is that unbidden terror that permeates this book. The author’s indoctrination into astronaut life was listening to a mercifully short recording of the Apollo 1 crew’s last words before they succumbed to flames. The unmistakable message: Spaceflight can and does kill.

Selected in 1978 as a NASA astronaut (one of the TFNGs, or “Thirty-Five New Guys” in polite company), Mullane flew three space shuttle flights. He paints a vivid, mesmerizing picture of launch day, where forced, carefree smiles mask the dread inside, and apprehension sucks “every molecule of blood from [the] crotch.” But there are even worse fears than mere exploding rocket fuel and flames—failure and dying as a “blubbering, whimpering, useless, coward…captured on the voice recorder.” Mullane’s motto, he writes, was “Better DEAD than Look Bad.”

He was lucky. He dodged a bullet at least twice. “The breeze from Death’s scythe had fanned my cheek,” he writes, when hot gases singed the SRB’s O-rings on STS 41 D, and debris strikes damaged the shuttle’s underbelly on STS 27—flaws that would ultimately doom the shuttles Challenger and Columbia and their crews.

Despite the risks, Mullane and the other TFNGs were undeterred, brave, fatalistic or, perhaps, self-delusional. As Hoot Gibson, king of Planet AD, said on STS 27 (borrowing a line from Butch Cassidy and the Sundance Kid), “Hell, the fall is gonna kill you anyway.”

The author admits that he would have ridden rockets even with the odds stacked heavily against him. But such bravado hid the “normalization of deviance” in NASA’s management culture that threatened the astronaut’s lives. The shuttle’s SRBs worked before despite damage to the O-rings. Why not next time, NASA argued? But such rationalization ultimately proved fatal. Mullane also rightly skewers politicians like former Senator Jake Gam and Representative Bill Nelson, who hijacked rides aboard the shuttle for personal gratification. The safety risk from stowaway politicos was negligible, but the nuisance factor was huge. However, the author saves his most vituperative attacks for NASA management, in particular George Abbey (then-director of the Johnson Space Center) and Apollo veteran John Young (associate director of the center), whose ambiguity, evasion and studied unpredictability about crew assignments undermined astronaut morale.

Ignore the profane in this book, entertaining though it may be. Instead, admire Mullane’s moving description of the sacred ground of the Beach House, with its Ozzie and Harriet furniture, where the Challenger crew last saw their loved ones. And appreciate, along with Mullane, his close friendship with fellow TFNG Judy Resnik, whose mane of black hair uncurled in orbit and, memorably, snagged the gears of an expensive IMAX camera. A few strands of her hair were all that were recovered after the Challenger disaster.

It is a strange alchemy that turns silver astronaut pins into gold (the distinction for veterans)—a chimerical mixture whose attraction is endlessly enticing. This revealing and memorable book explores that world and reminds readers that human space travel is, in the end, a very human endeavor, with all the passion and ambiguity that implies.