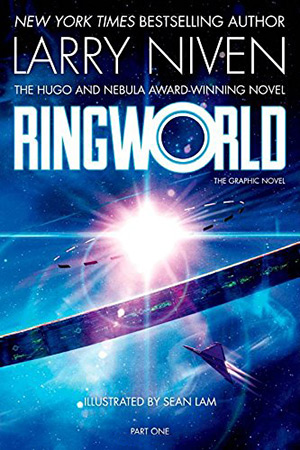 This is a young adult black and white graphic novel or manga style edition of Larry Niven’s classic Ringworld. It arrives as a 5×7 soft cover version and can be read in an evening. All of the major plot points of Ringworld are depicted, although sometimes quite briefly. The graphic novel covers the first half of the original book, and can be thought of like a visual ‘Cliffs Notes’ of Ringworld. If you have never read the novel, it deals with a ‘planet’ that has been geo-engineered by an ancient civilization using the entire resources of a solar system. This planet is in the form of a gigantic ring which goes entirely around its sun.

The book opens with four pages of panels depicting the human-Kzin space wars. The Kzin are bloodthirsty carnivores that look somewhat like large bipedal tigers. Humanity would have been exterminated if not for a timely visit by another alien race, the Outsiders. This race sells us the secret of hyperdrive propulsion, resulting in the extermination of two-thirds of the Kzin warriors and the confiscation of two of their planets.

Four hundred years later, the peace still reigns. We follow the human Louis Wu as he hops around the world via transport booths on his 200th birthday. Suddenly, he is confronted by an alien Puppeteer, Nessus. The alien appears similar to a two-headed ostrich with a single eye on each head. Nessus is recruiting Louis Wu and others for a secret mission, which is to explore an artifact that appears as a ring around a distant sun. The others recruited for the mission to reach this ‘Ringworld’ are a Kzin named Speaker-To-Animals, and another human. This human, a woman named Teela, is a product of generations of Earth’s Birthright Lotteries.

Nessus convinces Louis, Teela and Speaker to join him by offering an even faster hyperdrive ship if they survive the journey to Ringworld. This faster ship, which is drawn as a giant sphere, is desperately needed, since the Galactic Core has exploded and threatens to wipe out humans and Kzin in the future when the shockwave arrives.

To reach Ringword, the crew first visits the Puppeteer home worlds, where they switch to an experimental space yacht which contains special weapons and adaptations to protect its occupants from unknown dangers they might encounter. Even so, when they proceed to Ringworld and investigate an inner ring composed of shadow-creating squares, they impinge on wire which cuts the ship and causes them to crash on Ringworld. With the ship disabled, they take off in one-man flying vehicles which are drawn to resemble futuristic motorcycles with cockpits. They hope to reach the rim wall of Ringworld where they should find a spaceport, allowing them to leave this giant faux planet. On their journey, they have a disastrous encounter with some of the hairy natives who misinterpret them as the original Ringworld engineers. These hairy natives look somewhat like Chewbacca from the movie Star Wars.

Part 1 ends at the point where Speaker’s flycycle is zapped by flashes of what look like laser beams. The last page cliffhanger shows his vehicle going down as Louis yells, “Speaker!” If you have read Niven’s novel, you will recognize this as the novel’s halfway point where Speaker’s ship is attacked by the ‘sun flowers.’

I had read Ringworld a very long time ago, and found this adaptation a nice quick summary. It visualized for me all of the story elements I had originally enjoyed. Although initially Nessus appeared to be somewhat cartoonish, when I went back and reread the original novel, I realized that the Puppeteer is actually drawn quite faithfully. I did find that a couple of panels were confusing, and sometimes it seems like time skips ahead too far from one panel to another, such as when Louis goes from being bald to containing a full head of hair in the space of one panel.

Purists who have their own vision of Ringworld may not like this adaptation, but younger readers who missed the original novel may enjoy this as an introduction. I provided the graphic novel to my teenage son, and he found it entertaining and was intrigued enough with the story to read the original novel. Space enthusiasts and teens introduced to the concepts in the book may find themselves pondering some of the issues of geo-engineering such a planet. The novel introduces concepts such as shadow squares to create day and night to the inner side of the ring which is always in daylight. Gigantic magnetic rings along the edges provide deceleration for landing spacecraft. Huge rim walls at the edge of the ring keep the atmosphere from flowing over the sides. Residents who had forgotten the origins of the ring view it as a giant arch overhead and worship the original creators. And an automated asteroid defense keeps holes from being punched through the ring, which would drain off all of the air. Readers can only wonder if an advanced civilization would try to solve their space and resource issues by creating such a world, which provides millions of times more room than the local moons and planets.

A very nice addition at the end of the book is a timeline of events from the ancient past through 2895 and a detailed summary of each of seven planets of the ‘Worlds of Known Space’. Overall, my best enjoyment was using this graphic novel as a companion to the original book, switching back and forth between them. And, even though the depth of a written novel is not there, I found the read a nice reminder of why I enjoyed Ringworld originally.