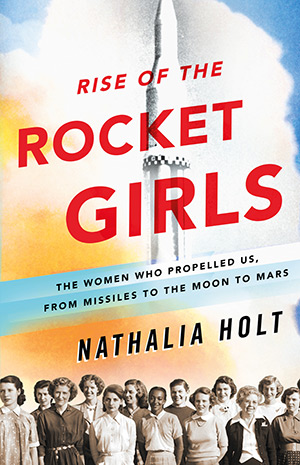 Pop science writer Nathalia Holt tells the epic story of the women of the Jet Propulsion Laboratory in this fascinating history that’s as much a timeline of U.S. space science as it is an entertaining group biography.

The Jet Propulsion Lab began as the “Suicide Squad,” an enthusiastic, notorious trio of amateur rocket-builders at Caltech in Pasadena, Calif. In 1939, the group was awarded a grant to research rockets for the U.S. government and took the official—and much more formalsounding—name GALCIT (the Guggenheim Aeronautical Laboratory at the California Institute of Technology). Their next grant, for the development of a rocket plane for the Army Air Corps in 1940, led them to change their name once again, to the Air Corps Jet Propulsion Research Project. This fit nicely with the Suicide Squad’s interest in space exploration, even as it earned scorn from those who insisted that rocketry was pure “Buck Rogers,” a “fringe” science that would never work in space.

Now the group could finally afford to hire staff. For skilled mathematicians, they turned to some friends: newlyweds Barbara and Richard Canright. Richard had studied engineering but was stuck driving a delivery truck; Barbara, part of a Caltech typing pool, had studied advanced chemistry and mathematics, and longed for more challenging work. The Canrights became the latest in a long tradition of human “computers” performing complex calculations for scientists and engineers.

The author draws a lively picture of Barbara Canright, who wrote long letters to her mother in Ohio describing her job as well as more mundane topics like dress shopping and cooking. Determined to look professional, Barbara dressed carefully for work while the guys at the lab eschewed ties and jackets for rolled up sleeves and work boots. Her work calculating rocket thrust and thrust-toweight ratios for experimental engines helped launch the first successful rocket-powered plane, just months before the attack on Pearl Harbor.

As the lab grew, Richard Canright was promoted to engineer and the calculator department added four more mathematicians, including former IRS auditor Macie Roberts. To their basic arsenal of slide rules, pencils, and paper, the group added a Friden electric calculator, a finicky machine the size of a breadbox that could add, subtract, multiply, and divide—cutting-edge technology for the 1940s.

Roberts, some 20 years older than the other computers, became head of the group, in charge of hiring as well as supervising. Her promotion made all the difference. Roberts seriously doubted that any male she hired would listen to a woman boss, let alone treat the female computers as his equals. So she only hired women. It was an unwritten rule for years, and made JPL unique.

Moving steadily through JPL history, Holt spotlights the growing department of women computers and their work from World War II through Sputnik and the Cold War, the creation of NASA, and the launch of probes and robot explorers to study our Solar System. JPL gave women the chance to do something important and far more interesting than secretarial work. Janez Lawson, the first African-American professional hired at JPL, became one of the first people in the world to program the IBM 701, the world’s first commercial scientific calculator, and the lab’s first non-human computer.

For every first, however, these women were also still part of a larger, more mundane world—one where mothers wondered when their computer daughters were going to get married, quit working, and have children. By the 1960s, fortunately, attitudes were changing. JPL instituted unofficial flex-time to accommodate working moms, but it still held annual beauty contests (“Miss Guided Missile,” later changed to “Queen of Outer Space”) until 1970. When the most experienced women were officially grandfathered from programmer to engineer status, engineer/former programmer Helen Ling mentored new hires, encouraging them to get advanced degrees in engineering. Today, JPL still has the highest percentage of women engineers of any NASA research center.

The first women programmers have retired, but pieces of their code live on in the software that controls JPL space probes. We may not get to see that code ourselves, but Holt’s cheerful history reminds us how much JPL, and science, owe those female computers.