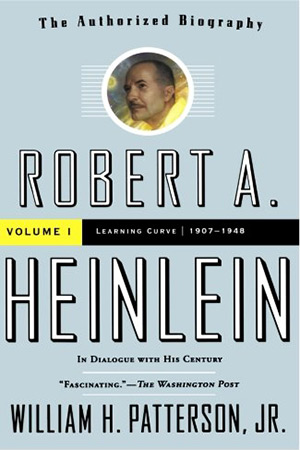 The best science fiction authors shape the future by inspiring their readers to go forth and do the things they imagine. The American rocket pioneer Robert Goddard wrote fan letters to H.G. Wells. In the following generation, another great visionary inspired the engineers and scientists — and the politicians — that sent men to the Moon. No single person in the past century has had more influence on the way Americans (and many others around the world) view the future and its possibilities than Robert Heinlein, a man born in the days of horse and buggy, who before the end of his life would witness the first landing on the Moon as a television commentator sitting next to Walter Cronkite. He was one of the most influential shapers of science fiction as literature in the history of that field. But he was many other things, as well.

Heinlein was born into a typical lower middle-class family in Missouri in 1907, and knew from an early age that he would have to make his own way to the life he wanted. He planned and executed a campaign to gain a congressional nomination to the U. S. Naval Academy, and went on to graduate near the top of his class. His first assignment was aboard America’s most modern warship, the aircraft carrier Lexington. His commanding officer on that cruise was Captain Ernest King. During World War II, Admiral King served as commander-in-chief of the U.S. Fleet and chief of naval operations; Heinlein was getting his education as an officer from the best, and earning solid marks in his apprenticeship. But his promising naval career was cut short when he contracted tuberculosis and was forced to accept a medical discharge. He tried his hand at several other things, including politics, before finally turning to writing science fiction for the pulp magazines he had loved to read from an early age.

Heinlein’s first published story appeared in the August 1939 issue of Astounding. Readers’ reaction to his first stories made it plain that he was a born storyteller, and by the end of 1941 he was the acknowledged master of American science fiction. But when the Japanese sank the battleship Oklahoma (on which he had previously served) and most of the rest of the U.S. Pacific fleet at Pearl Harbor, he put his typewriter aside and hurried to get back to the Navy in whatever capacity they would have him. To his chagrin, he discovered that his activity in New Deal politics in California during the depression was sufficiently radical to prevent his return to active duty. He was suspected of being a communist sympathizer. His socialism wasn’t of that naive a stripe, however; he had always classed communists and fascists as equally nasty enemies of freedom.

One of the most difficult things to understand about Heinlein is the interplay of liberal and conservative elements in his philosophy. He is generally thought of today (except for his liberalism on sexual issues) as a very conservative figure. But he started his life as a self-described socialist. It is strange to us today to understand how a man who viewed himself as a socialist could at the same time think of socialism as being able to coexist comfortably with a capitalist economy and personal freedom. Part of the answer lies only in our hindsight of how socialism actually played out in the history of the twentieth century. Some of the rest of the answer comes from understanding how the political lines shifted over his lifetime, to the point where today’s conservatives are the defenders of the views of “classical” (i.e. Enlightenment-era) liberalism. How Heinlein’s political views evolved during the Cold War will be one of the most interesting parts of the second volume of this biography.

Heinlein spent the war years as a civilian engineer at the Naval Aircraft Factory in Philadelphia. Deprived of the opportunity to get shot at, he threw himself body and soul into the work of equipping the men who were, and battered his already fragile health in the process. This part of his biography is a vivid example of the moral code by which Heinlein lived his own life, which would eventually be passed on to his readers through his fiction. Among his more interesting assignments was directing a think tank of other science fiction authors in developing countermeasures to the Japanese kamikaze attacks. None of their ideas were very successful.

When Heinlein returned to writing after the war, he set his sights on more prestigious markets. His short story sales to The Saturday Evening Post opened the way for other science fiction authors to break into the slick magazines, where the pay was a lot better than in the pulps. It was also in this period that Heinlein turned to the novels which would be his most influential, a series of young adult novels like none ever seen before. They would be, he said “aimed at the early ‘teens and having heroes three or four years older than the reader, so that he may imagine that he himself might take part in such adventures in the near future. The style should be fast, simple, and not written down. It should hook as fast as a pulp story and have continuous adventure, with authentic science, not too much elaborated… I have no doubt of my ability to do such stories, well enough to meet the competition.”

Did he ever. It’s an easy bet that a majority of the members of the National Space Society (readers will have to wait for the second volume of this biography to see his role in the founding of this organization) were inspired by reading those novels. For a measure of his influence, look no farther than the fact that the only time a serving NASA administrator has chosen to appear at a science fiction convention was when Michael Griffin spoke at the Heinlein Centennial convention in 2007.

But it wasn’t just futuristic technology that Heinlein was writing about. He was, very deliberately, teaching his own moral code. Look at his instructions to his agent regarding the marketing of his first juvenile novel, Rocket Ship Galileo: “I have deliberately selected a boy of Scotch-English pioneer ancestry, a boy whose father is a German immigrant, and a boy who is American-Jewish. Having selected this diverse background, they are then developed as American boys without reference to their backgrounds. You may run into an editor who does not want one of the young heroes to be Jewish. I will not do business with such a firm.” His readers were absorbing these attitudes through their fingertips as they held his books. Characters in later novels would be still more ethnically and culturally diverse. Heinlein wasn’t just interested in encouraging his readers to become good engineers; he wanted to mold good character.

Patterson writes a straightforward narrative without much analysis, letting the life story speak for itself. There are scenes in the book that will bring a smile to devoted Heinlein readers — Heinlein in the desert at White Sands, watching his first V-2 launch; Heinlein and his wife Ginny sitting in a little travel trailer, plotting Hohmann transfer orbits by hand for his novel Space Cadet. We can recognize a kindred spirit, because it’s the spirit he awakened in us.

Few people lead lives significant enough to justify a two-volume biography. Heinlein is in that select company, and Patterson has done well enough with the first volume to leave readers impatient to read the rest of the story.