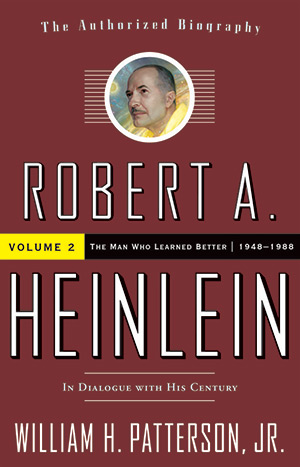 Since the publication of Robert A. Heinlein: In Dialogue with His Century: Volume 1 (1907-1948) in 2009, Heinlein fans were waiting impatiently for the rest of the story. This volume, taken with the first one, brings this biography to 958 pages of text and 274 pages of footnotes and bibliography—about three quarters of a million words. “Comprehensive” is the word we’re looking for. There’s enough detail here to satisfy all but the most fanatical fan. You may not know what Heinlein had for breakfast on any given day, but in most cases you’ll know where he was when he ate it.

Those of us who grew up reading Heinlein’s optimistic and visionary novels (such as Starship Troopers and Stranger in a Strange Land) about the exciting future awaiting humanity beyond the bounds of Earth will need no explanation of why that kind of attention is merited for a science fiction author whose most influential works are a half-century old, with backgrounds that in many cases were rendered out of date by the first Mariner probes to Mars and Venus. For us,  Heinlein was the intellectual father of the space movement. This biography is therefore a “family” story for us, and in its pages we find references to many other family members. We meet Jerry Pournelle before he was Famous Author Jerry Pournelle, and “a young fan in Colorado Springs” named G. Harry Stine (a founding figure of model rocketry).

Heinlein was much more than a science fiction writer. He was an American patriot, passionately concerned with the future of his country. That concern extended to politics (he forsook his background in Democratic politics to actively campaign for Barry Goldwater, and butted heads with the local Republican establishment in the process), but it didn’t end there. He joined the select group of “scientists, military men, policy wonks, and science-fiction writers” assembled by Jerry Pournelle as the Citizens Advisory Council, helping to produce a number of influential position papers for President Reagan, including the one that led Reagan to propose the Strategic Defense Initiative to develop anti-ballistic missile technologies. Derided by its opponents as “Star Wars,” and despite funding cuts by the administrations that followed Reagan, this major policy shift from offensive to defensive weaponry has moved steadily forward ever since. Heinlein was a fierce advocate of this effort to retire the doctrine of “Mutually Assured Destruction” (appropriately abbreviated MAD) that held the opposing nations of the Western world as nuclear hostages to each other.

Space was, of course, never far from his heart when it came to his public service efforts. He wrote and published advocacy pieces everywhere, gratis, including a Star Trek fan magazine. Heinlein was very much involved in the L5 Society, which merged with the National Space Institute to create the National Space Society in 1987 (the year before Heinlein died). But his public service wasn’t limited to space and defense issues. Many science fiction fans, including this reviewer, made their first blood donations at science fiction conventions, as a direct result of Heinlein’s appeals for that cause. One of the big surprises for me in this book was the account of just how influential Heinlein was in completely transforming the way in which the Red Cross and other blood donation centers sought out and interacted with volunteer donors.

To the end of his days, Heinlein was an adventurer at heart. He and his wife traveled all over the world on many ocean cruises. In 1983, at the age of 75, he visited Antarctica, and a couple of years later, just before his final illness, he took part in the first successful ship’s crossing of the Northwest Passage. For his ever-inquisitive mind, this planet was as interesting as any other. When he died at age 81, those who knew him would say he died much too young.

Many reviewers have complained about the hagiographic nature of this biography, and it’s true that Patterson manages to reach the conclusion that everything Heinlein did and thought was exactly right. That’s not surprising, given that Patterson  was the first president of the Heinlein Society and the biographer personally selected by Heinlein’s widow to produce “the” authorized story of his life. But set this flaw aside. Patterson died shortly after finishing this second volume, so he has no further opportunity to revise and extend his remarks. What he left behind is a good, detailed, factual account which gives future biographers a solid foundation to build upon, and meanwhile gives Heinlein fans an intimate look at the man who so influenced their lives. One suspects it will be a long time before anything better comes along.