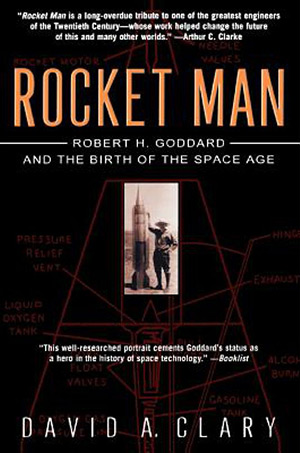 Every heroic age must have its pathfinders, prophets, and pioneers. The unquestioned pioneer of liquid rocket propulsion in America was Robert Goddard. In the previous century, especially during Project Apollo, he was heralded as the inventor of all modern rocketry. Misunderstood by the press for his early work and plans for space travel, Goddard became secretive and refused to work with outsiders. He claimed that German Hermann Oberth, who published a design for a liquid rocket in 1923, had stolen the design from him. There were stories that the Germans stole Goddard’s patents to design the V-2 rocket. He was regarded as a shy and secretive designer, and yet he had world renown. Where does the truth lie? David Clary’s balanced biography attempts to separate the myths from the man and provides us with a unique look at this undoubtedly unique and talented man.

Goddard is a figure little known today, except for the NASA space science center that bears his name. Or, if Goddard’s name is known, he is acknowledged as one of the “three fathers” of modern spaceflight, along with the Russian Konstantin Tsiolkovskiy and the German Hermann Oberth. Where Tsiolkovskiy and Oberth studied the theoretical and mathematical principals of rocket travel through space, Goddard was the only one of the three to put theory into practice.

Born in 1882 to Bostonian Yankees of the late Victorian era, Goddard was a typical scientist of his time, interested in many things, from rocketry to electricity to solar power. He was also physically frail, suffering and surviving an early attack of tuberculosis, and endlessly pampered and watched over by his mother, grandmother, and later, his wife. Absent-minded and often distracted by flights of fancy, Goddard often neglected his teaching duties at Clark University (he chaired in physics and mathematics, mostly in absentia). He did not socialize well, and focused on tasks only when pressed by necessity.

Goddard came to rocketry almost by accident. He was captivated by the idea of human beings flying to the Moon, Mars, the planets, and even the stars. He often considered problems such as solar power, electric propulsion, and meteors, but his ideas and writings were often vague or poorly thought-out. Eventually, though, Goddard turned from theoretical dreams to the practical concerns of getting a human being into space; and through that change, Goddard’s life changed forever.

Clary offers a variety of explanations for Goddard’s contradictory and often infuriating personality. Because of his early illness, Goddard was kept at home until his late teens, leaving him socially awkward. As a way to cure himself of TB, he spent a great deal of time outside to ensure himself of fresh air, even in the middle of a New England winter. Having survived that, perhaps he felt he could survive anything. One event that made an impression on him was reading H. G. Wells’ War of the Worlds. Afterward, he climbed a cherry tree in his grandmother’s yard and daydreamed about the idea of “ascending” to Mars. He marked that as his “Anniversary Day” because that vision eventually led him into the rocket business.

The reason Goddard might be called infuriating is because it takes quite awhile in the book and in his life before he finally gets around to doing what he was famous for: building rockets. For instance, Clary notes that:

Goddard had difficulty focusing his mind on a problem; often he would drop an approach and chase another because it suddenly occurred to him. Equally often he would digress from the mechanics of rocketry to wander among the planets…These shortcomings were especially evident during periods when money was no object. When circumstances forced him to concentrate, Goddard’s focus improved…when he had money in his pocket and was left on his own, Goddard reverted to his haphazard way of doing things.

Despite this, Goddard comes across as a likeable person, shy but genial, and not an altogether bad sort of man. He got influential people to back him, like Charles Lindbergh and Daniel Guggenheim, but often disappointed them by going off on tangents. He inspired Frank Malina, co-founder of the Jet Propulsion Laboratory, but refused to cooperate with JPL when they began working on rockets. In short, Goddard was a genius in things that mattered to him, and often blind to things that did not.

The most interesting aspects to Goddard’s story are his ingenious methods for proving the feasibility of rocket propulsion in vacuum and his dogged persistence. He and his team of machinists would run a test, blow something up, and try again, usually within a month or two.

It would have been useful if the author had included some more images from Goddard’s notebooks or diagrams of the machines he was trying to build. If Goddard had 214 patents issued in his name, Clary could have excerpted one of them. However, this is a story about Goddard the man, not Goddard’s rockets. Those looking for a technical history of Goddard’s inventions will be disappointed.

There is a chapter dedicated to the efforts Goddard’s wife Esther and friends made to create, sustain, and perpetuate his legacy and reputation after his death. She was determined “turn him into the Mount Rushmore of rocketry.” Esther is quite a character herself, devoting her life to protecting and promoting her husband’s work. It is here that Clary attempts to sort out myth from fact, and I leave his speculations about the truth or fiction of them as exercises for the reader. However, I was convinced of the overall truth of Clary’s narrative.

I wondered after I read this book if all inventors have been like Goddard. I suppose, because they are human like Goddard, they too will live lives that make for contradictory but fascinating biographies. If you want to get a look inside the story of a real “astronaut farmer,” you will enjoy Rocket Man.