Book Review: Rocket Men: The Epic Story of the First Men on the Moon 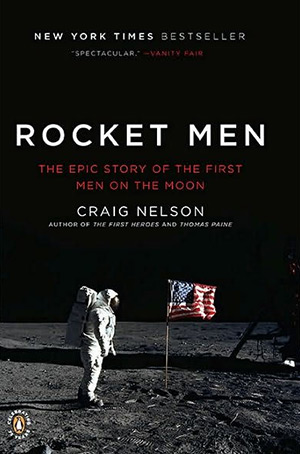 More than 40 years after the event, and scores of books later, what can anyone possibly have to say that is ‘new and interesting’ about the first manned mission to the Moon? I have to admit, that was my first thought when a friend offered me his copy of Rocket Men. But, as I started moving through the narrative, I was pleasantly surprised that author Craig Nelson, while not revealing much in the way of ‘new’ information, has created a very compelling piece of work. His story telling ability is his strong suit, and he weaves many quotes throughout to give creditability and ‘first person appeal.’

You also have to realize that this is not just ‘Apollo 11 warmed-over,’ as the author integrates numerous stories behind the prime movers of the era (von Braun, James Webb, et. al.) into the plot. Likewise, many of the unsung heroes — technicians, programmers and mission controllers — have their part revealed in a way that will keep the reader turning pages, even though you know the outcome! Along the way, you will also spend a bit of time with Copernicus and Galileo, Tsiolkovsky and Goddard. The integration of the Cold War and the Soviet’s chief designer (Serge Korolyev) are also there.

Nelson has captured the essence of many of the astronauts, besides the Apollo 11 crew (Armstrong, Aldrin and Collins), to help him reconstruct this very magical moment in time. His recreation of the Apollo 1 fire brought my emotions to a high state as did the final moments of the lunar landing itself.

Towards the latter part of the book, the impact of the mission on the professional and personal lives of these three men are brought into focus. Two were divorced after many years of struggling with the consequences of their fame, while all three suddenly found themselves no longer able to continue their careers as ‘test pilots.’

Perhaps the most important aspect of Nelson’s work is the questions he asks in the last chapter with regards to future of human space flight. These are profound and will force the reader to examine their own feelings on the subject.

OK, so what is the down side? The basic (and glaring) flaw in the book is that Nelson is not an aerospace historian. He had to come up-to-speed on the technology and the terminology — not an easy task. Unfortunately, he apparently failed to get a reasonable authority to proof his work. All of us who have put pen to paper are guilty of this to some extent. But, the errors are so numerous and so obvious that they make the knowledgeable reader cringe: comments like “The X-15 was aerotowed into the sky…” and that “…Armstrong logged over 4,000 hours in his X-15….” As Nelson was a vice president and executive editor of Harper and Row, Hyperion, and Random House, his credentials make this editorial faux pas puzzling. I was also disappointed that he chose to include quotes that contained lurid profanity and blasphemy — the appropriate use of the ellipsis does wonders to avoid embarrassing the source and upsetting the reader.

Of course, these kinds of issues cast doubt on the validity of any work. However, Nelson’s ability to transport the reader emotionally back to an epic moment in time may be its redeeming asset.