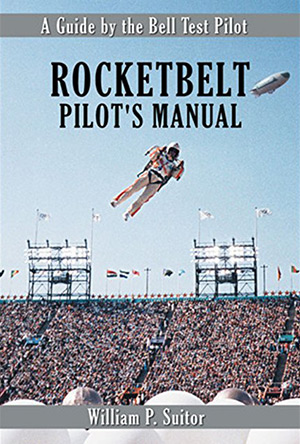 It is the dream of many inspired by Icarus and Daedelus and one of the most oft-desired superpowers. For most of us, the idea of personal flight is only a fantasy with no potential for fulfillment. In the classic Buck Rogers newspaper strip by Richard Calkins or the Commando Cody Saturday movie serials, we had a model for personal flight via propulsion technology. This was emulated by various comics and space opera heroes like Adam Strange, Nighthawk, and currently Iron Man. The jet pack was even duplicated painstakingly for boys’ adventure toys like Captain Action and G.I. Joe.

However, the real-life superhero of personal flight was William Suitor, an aerospace pioneer and perhaps the most visible of the Bell Rocket Belt pilots in the 1960s. Those of us who grew up in the Space Age saw him take flight at Super Bowl I, in the television series Lost in Space, and in Thunderball at the movies. In the back of our minds, we knew that wasn’t really Guy Williams or Sean Connery taking to the air, but we did not know that it was the same real-life adventurer in every scene.

Originally conceived by inventor Wendell Moore to meet the U.S. Army’s desire for greater mobility for soldiers, the rocketbelt laid the ground work for other applications such as the HHMU (Hand-Held Maneuvering Unit) used by Ed White on his Gemini IV space walk or the MMU (Manned Maneuvering Unit) first used by Bruce McCandless in 1984. The Bell Rocketbelt was not just a stunt; it was true rocket science.

Powered by two hydrogen-peroxide-fueled rocket motors, the rocketbelt generated 330 pounds of thrust, sufficient to lift a 175-pound pilot and the weight of the 100-pound unit itself with 45 relative pounds of thrust at takeoff. The 50 pound fuel capacity was only enough for 21 seconds of run time. Suitor analogizes that, instead of a 3,000 pound car being moved by a 150 horsepower engine, he was a 300 pound payload moved by a 1,000 horsepower engine! Little wonder, then, that he advises prospective rocketbelt pilots to make very small corrective movements. A light hand on the throttles is a requirement for success.

Because the rocketbelt is essentially an aircraft, there are some unique flight characteristics that differ from, say, a Hawker Harrier jump-jet or other vertical take-off and landing aircraft. For forward flight, the pilot angles the thrust funnels and applies more thrust via the throttles, just as a helicopter pilot might do. By using the yaw control, the rocketbelt pilot could turn his body to a 90-degree angle and still maintain forward flight, essentially flying sideways. However, by elevating the outboard rocket tube, the pilot can make a conventional banked turn. If Suitor had more fuel supply, he states with certainty that he could have accomplished a full barrel roll.

In The Rocketbelt Pilot’s Manual: A Guide by the Bell Test Pilot, Suitor shares his amazing experiences of personal flight in a matter-of-fact style with just a touch of awe for his incredible flights. Like any good pilot, Suitor stresses safety through the book. In addition to good body mechanics and posture, he repeats the dictum of Bell Crew Chief Ernst Kreutinger, “we will not deviate,” referring to all safety protocols. This led to a 100 percent safety record, encompassing over 3,000 flights from 1961 to 1969. Suitor also continuously reminds readers that an unpowered rocketbelt has the glide ratio of an anvil, so pilots must watch their fuel supply and flight time!

Perhaps this book’s most valuable contribution to aerospace history lies in the illustrations. Of course, there are numerous scrapbook shots of Suitor with space heroes like Neil Armstrong and John Glenn. However, the really historic gems in this time capsule are the reproductions of the original patent drawings for the rocketbelt and its spinoffs like the lunar pogo proposals and an underwater propulsion unit. This book belongs on the shelf of anyone interested in aeronautical science, science fiction, or popular culture.