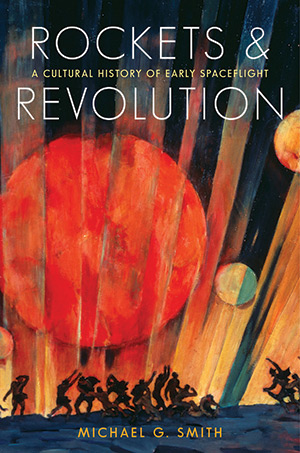 This book is more a study in socialist philosophy than it is of early spaceflight. The book is recommended only for those who are interested in a different perspective on the cultural and philosophical aspects of the development of rockets.

Rockets and Revolution, according to a press release “offers a multifaceted study of the race toward space in the first half of the twentieth century, examining how the Russian, European, and American pioneers competed against one another in the early years to acquire the fundamentals of rocket science, engineer simple rockets, and ultimately prepare the path for human spaceflight.” However, I found the content quite different. The primary emphasis is on the period from the mid-1800s to the 1930s.

The author, Michael G, Smith is an associate professor of history at Purdue University. The book is composed of 13 chapters divided into three “books.”

The introduction to Rockets and Revolution highlights the philosophical aspects of the human desire to free the mind and open it to exploration beyond the present. A wide variety of quotes from Descartes to the extremes of Nietzsche heightens the awareness of what is to come.

The author adeptly establishes the foundations of a technology race that ultimately set the Soviet Union against America with the launch of Sputnik in 1957. Smith states that, “This book is more a free history of ideas than a strict history of science; more a broad history of popular culture than a study of science and technology.” The book’s title “A cultural history of early spaceflight” was misleading as it concludes long before any spaceflight is achieved.

In Part One, Smith examines the political philosophies that sought to tie imagined life elsewhere in the universe with the realms of daily life here on earth. This reader had to work hard to stay in sync with his portrayal. Dozens of quotes, and the author himself, employ the metaphor of Prometheus at least 30 times—I would be hard-pressed to explain why.

As Smith moves forward with his paradigm in the period of the late 1800s, one might question if the participants were actually as philosophically engaged as he imagined or  more interested in the application of science and engineering to an exciting new frontier. While the author includes many European countries in his presentation, Russia (then the Soviet Union) dominates the scene.

The author calls on several writers of the period to integrate Darwin’s theory of evolution and the natural sciences into the cosmos. It was thought (by some) that these forces, guided by the human intellect, would create a perfect social and biological structure for the future. Theism is sacrificed on the altar of science.

While Darwin’s theory became ascendant among the intellectuals of the period, the author notes their lack of understanding of the biology involved. Likewise, the laws of thermodynamics, subsequently formulated, would militate against such as theory, but failed to shake committed Darwinists.

Shortly after the turn of the century, technology in the form of flying machines and electricity began to dominate the thoughts about future earthly conflicts. This gave rise to those who believed these concepts spelled the ultimate end of civilization, by devastating wars as chronicled by the science fiction writers of the day like H. G. Wells. Discussions of the philosophers varied widely from science destroying the god-myth to the indwelling of faith more deeply as the uniqueness and complexity of life became more apparent. Coming on the scene was the panspermia thesis in which life was transmitted throughout the universe by microscopic microbial spores, emitted from planets like the airborne seeds of the common dandelion.

The often complex and confusing philosophy presented is periodically interrupted with tangible science. In one instance the advances of cryogenics by James Dewar that led to liquefaction of oxygen (1891) is revealed and the possibility of suspended animation is introduced.

Smith’s philosophical portrayal of the space-time continuum finally opened to events and concepts that I could wrap my mind around—the hot air balloon and wireless communications. The familiar paradigms Tesla and Lowell brought me back to more rational thought.

With Lowell’s fanciful and highly speculative discovery of an intelligent civilization on Mars (Any reference to Giovanni Schiaparelli’s canali is mysteriously missing), popular science fiction frequently centered on Mars with much of the public convinced that Lowell’s canals were real.

It isn’t until chapter three that the father of space travel, Konstantin Tsiolkovski, is introduced. The interaction of the ideas of Federov and Meshcherski’s “dynamics of a point of variable mass” (1897) was a catharsis for Tsiolkovski.

Smith identified the year 1908-with the public success of the Wright Brothers, the discovery of x-rays and wireless-as a pivotal moment when there was a common notion that there was no limit to scientific progress. Despite advances in rocket science as described in chapter three, and the mechanics of interplanetary travel, Part One ends with the author’s return to philosophical diversion of bohemian style dreams and poetry. The continued relationship of philosophy, religion, technology and politics, makes for challenging reading.

According to the author, many spaceflight visionaries wrote and prophesied of the ascendance of socialism as a means to salvation and a second birth for mankind. Was humanity to be the master of the earth or a slave of its ever present gravity—bonding us to it. Could humanity engineer its own immortality?

Following the Great War, futurists such as Douhet and Rynyin prophesied that air power and rockets would dominate future wars. Smith continues to intertwine these and effectively documents the recognition of a strong aviation and rocket technology by the emerging Soviet government. To this point the rhetoric of the Russian philosophers was just words. Smith’s observations and analysis offers a different perspective on the interplay of socialism and atheism.

Smith highlights the resurgence of the interest in spaceflight by the Soviets in the 1920s by promoting Tsiolkovski and increasing the number of the students in a variety of civilian and military schools. Yet those with foresight met resistance by the academic authorities as being too far ahead in the realm of aviation technology. The conservatism of academics would force the visionaries to wait for a more opportune time.

Smith brings together the philosophies of Marxist socialism and Darwinian evolution and the ever present dogmatic socialist thesis that theism and creationism must be stamped out by state-sponsored attacks. Unlike in most western nations, some Russian philosophers saw the great expanse of their country as an essential vehicle for humanity’s salvation. Virtually every aspect of the socialist agenda is previewed including eugenics, to cleanse humanity of its weak—to perfect humanity for immortality.

The Soviets viewed unbridled capitalism leading to destruction of the ecology of our planet. Compare these views of socialist intellectuals of 80 years ago with the devastating impact that the Communist system has had on our environment in the present Soviet and Chinese spheres of influence.

Each time the author brings the reader to the point of incomprehensible absurdity, such as correlating solar activity with a variety of human endeavors, including political events to include both the French and Russian revolutions, reality is injected. Toward the end of Book Two, the timeline has progressed to the early 1930s and America’s aviation hero (Charles Lindbergh) puts forth his own philosophy. His collaboration with both Goddard and Alexis Carrel, are revealed in writings that support the notion of space travel and immortality.

The author notes that one of the longest lived and famous rockets societies (The British Interplanetary Society-1933) was stifled from experimenting because of the British Explosives Act of 1875 that forbid private individuals from possessing explosives. The birth of the three other dominant rocket societies (VfR, GIRD and ARS) and the principal players are described. Also included are the highlights of the early stratospheric balloon flights  of the 1930s.

Smith includes the rhetoric of the 1930s regarding the many forecasts of the coming war and the need for aerial and a rocket supremacy. Again the fantasy of science fiction was woven into the fabric of reality to justify inflated expenditures by the Soviet government. The reader is brought rapidly and concisely through the 1930s by describing the Soviet military embrace of rocketry while falsely asserting that Goddard was receiving a massive support from the American military.

The German army was likewise pulling selected individuals from the VfR (Rudolph and Von Braun) under the guidance of Walter Dornberger. Here, Smith’s research is detailed, accurate, and reflects the mindset of that period. Just as technology was beginning to turn theory into reality, the Stalinist purges decimated the ranks of those reaching for the future.

Citing article after article, the author again emphasizes the Soviet use of aviation triumphs to propagandize the advancements and power of their socialist technology. But the redundancy of the socialist paradigm, repeated in each chapter, caused this reader to skim over numerous paragraphs.

The book concludes with the start of World War II and briefly introduces the German V-2—not from a technology perspective, but as a terror weapon in keeping with the theme of the book’s cultural emphasis.

For all their socialist posturing, the Soviet’s success in space between 1957 and 1964, was fundamentally the achievement of a relatively small group of dedicated men who succeeded in spite of the cultural system under which they worked.

Perhaps the most amazing aspect of Smith’s work is the extensive effort he put forth in research and correlation as evidenced by his 67 pages of notes in an addendum. The book’s extensive footnotes and illustrations are a study in themselves, as they are the product of the times and worth reflecting on. Make sure you have your Latin phrase handbook available.