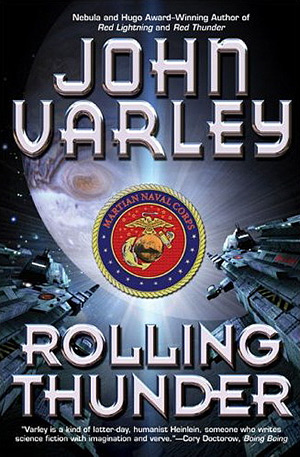 Rolling Thunder is the third book in a stealth series by Hugo and Nebula award winner John Varley. I say “stealth” because the series aspect of it snuck up on me. Unlike J.K. Rowling, who said at the outset that there would be seven Harry Potter books, Varley gave no clue that Red Thunder, the first book in this series, was anything but a standalone adventure story. He followed it up with Red Lightning, and now with Rolling Thunder I can see a pattern emerging. Clearly there is more to come.

In Red Thunder, the point of view character was Manny Garcia, a 19-year old Cuban-American, who had recently graduated from high school in Florida, just a few years ahead of us in a slightly alternate reality. In that reality, the Lockheed VentureStar had succeeded the space shuttle in providing transportation to the International Space Station. Manny, his girlfriend Kelly Strickland, along with ex-astronaut Travis Broussard and two friends from high school, become the first to land on Mars, in a homebrew spaceship built from a railroad tank car and a radical new propulsion system invented by Travis’ genius cousin, Jubal Broussard. It’s a great book and I recommend it.

Red Lightning is seen through the eyes of Ray Garcia-Strickland, the son of Manny and Kelly, a Mars native. The tone is darker in this book, as a major disaster strikes the Earth. Ray, his parents, his sister Elizabeth, Travis and Jubal, and Ray’s girlfriend Evangeline play a major part in preventing the damage from being a lot worse than it was.

Now in Rolling Thunder, the main character is Podkayne Strickland, the daughter of Ray and Evangeline. At 6’4″, Podkayne is only slightly taller than the average Martian woman. Mars’ lower gravity leads to taller, thinner people, with less need for large muscles to fight gravity. Eighteen year old Podkayne, a pop singer, enters mandatory service in the Martian Navy as an entertainer.

If the name Podkayne rings a bell with you, it should. It is the name of the heroine in Robert A. Heinlein’s Podkayne of Mars. Podkayne’s father Ray was a Heinlein fan. Whereas Red Thunder and Red Lightning were written in the style of RAH’s juvenile novels, Rolling Thunder goes over the top in that direction. It is loaded with references, some subtle and others blatant, to Heinlein’s many books. Heinlein fans will get a chuckle, or maybe even a guffaw, when encountering one of these. Readers with no Heinlein background will enjoy the story too, but on a different level.

In Rolling Thunder, Podkayne is first stationed in Pismo Beach, California, which she hates. The gravity is oppressive, and the “Earthies” she encounters are lame. After six months, she gets her wish and is reassigned to Europa. There she meets some other musicians and with them forms and fronts a band called The Pod People. They click and become a hot ticket among the Navy personnel on Europa. In the process of visiting one of the outposts on Europa, Podkayne encounters mysteries, including things that may or may not be life, but certainly not life as we know it. Things erupt while Podkayne is far from the main base and she is nearly killed. The situation gets a lot worse for Earth and it is not great on Mars either.

Ultimately, Travis and Jubal reenter the story, as they had done in all the books so far, and we finally find out what Rolling Thunder is. As the book winds down, it becomes clear that we are far from a final resolution. There is more to come, and I would bet money that the main characters of the next book will be the offspring of the heroes of this one.

Rolling Thunder envisions a Solar System that is thoroughly inhabited by humanity, with outposts as far out as Sedna. It stands on its own, because backstory is discreetly sprinkled where needed. However, for maximum enjoyment, you should read Red Thunder and Red Lightning first, to acquaint yourself with the characters and how the Solar System got to be the way it is. I recommend all the books that have appeared in this series so far and look forward to the next one. The scope of each book has expanded on that of its predecessor. I expect the next book will expand that scope again.