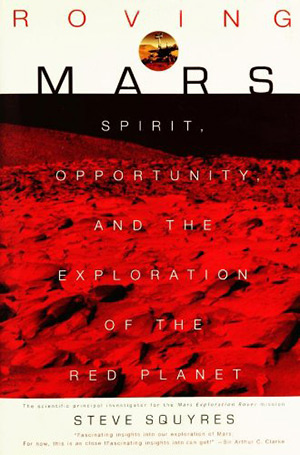 Roving Mars is more than a chronology of the triumphs and difficulties in studying Mars. It is a testament to the perseverance of the men and women who believed in studying the planet from the surface. It is also the journey of the author, Dr. Steven Squyres, from his first look at Viking photographs as an undergraduate to his role as the principal investigator for the MER mission. He knew, after seeing those grainy images, that his life’s work would be to study Mars in depth via robotic space missions. In order to do this, he envisioned a craft that would be a mechanical geologist, sending back details for the researchers to study.

To pursue his dream, Squyres enlisted the aid of friends and colleagues within NASA, at the Jet Propulsion Laboratory, in academia and private industry. At first distrustful of the engineers who would build his vehicle, he and his team soon learned to rely on their expertise to get the tasks accomplished, creating a cohesive unit that was ultimately successful.

Because of the orbits of both the Earth and Mars, missions to the latter were feasible only every two years. The book chronicles the attempts to convince NASA to mount missions that would contain his equipment, including panoramic cameras (known as PAN CAMS). For ten years, each time a mission was suggested, proposals written and hardware demonstrated, the team lost to other teams whose proposals were more in line with NASA philosophy.

Finally, in 2000, Squyres’ team proposed sending a rover to Mars that would be able not only to photograph the surface features, but perform spectrographic and imaging studies of the rocks and soil. The goal of the mission was to find evidence of water, either at present or in the past, by looking for the spectra of Hematite and Jarosite. Equipment was built both in the United States and in Europe. For example, to study the interior of rocks, a small contractor in New York City built the Rock Abrasion Tool (RAT). It was interesting to learn that this company, Honeybee Robotics, chose to honor the destruction of the World Trade Center in 2001 by using a remnant of the Towers in its tool. After exhaustive reviews, NASA liked the plan so much that they asked the team to produce two rovers to study different areas of the planet.

There were many setbacks and crises in the construction of the rovers, their protective airbags and parachutes, as well as cost overruns which prompted NASA on several occasions to threaten to cancel the program. The team persevered and the two rovers, now named Spirit and Opportunity, were launched in June and July 2003 respectively. At the first launch of Spirit, it was bittersweet for the team as they were elated to finally see their craft launched on its journey to Mars, coupled with the fact that they would never see it again.

The work was not completed with the launches. After the seven-month journey, Spirit arrived at Mars in January, 2004 and descended through the Martian atmosphere with parachutes to slow its descent, encased in an airbag design that was successor to the one that protected Mars Pathfinder in 1997. The reader could actually feel the anticipation as the team waited for word that Spirit was on the surface at Gusav Crater and was able to share in the joy of the moment. (Actually, I watched the event in real time on NASA television and was still caught up in the moment when reading the book.)

The Martian day, known as a ‘sol’, is 39 minutes longer than the terran day, necessitating the investigators on Earth to adjust their lives to accommodate the extra time. This led to physiological, emotional and familial issues, but the teams endured them for the good of the mission. There were mechanical difficulties from the onset on Spirit, which did not prevent it from exploring its surroundings. Then Opportunity landed and the team was divided into two teams to manage each rover. Opportunity landed in the Meridiani Plains, which from the outset, astounded the researchers with scientific finds beyond their expectations. The rover studied nearby spherules which were dubbed “blueberries” and found them to contain hematite, which showed evidence of water in the Martian past. And, more importantly, the rover found evidence of jarosite, the smoking gun for the existence of liquid water.

The book concludes in September, 2004, way past the rovers ninety-day warranty period. To date, the rovers are still going strong. They continue to provide spectacular images of Mars and data to support and dismiss many theories that will keep scientists studying for many years to come. Dr. Squyres inspirational leadership of this successful Mars program was recognized by the National Space Society in its award to him of the prestigious Von Braun award in 2007.

As a graduate student in a space studies program, I have had the opportunity to study the articles written by Dr. Squyres and his colleagues about Mars. From the first page of the book, I was enthralled, eagerly reading to learn more about the process to successfully get a space mission planned, developed, built and launched. I, too, felt a pang of loss when the rovers were launched from Earth. The book was easy to read and understand and the author provided explanations of scientific terms and concepts so that non-technical readers will understand everything. The author acknowledged every person he encountered in his goal to get a mission to Mars, giving them more than a one-dimensional existence. The emotions of all the participants were conveyed through the words, making the reader an integral part of the entire process. While findings continue to be reported in the scientific journals and by NASA, the book provides an excellent foundation to learn about the entire space mission process. There are 32 pages of pictures of the teams as well as images returned by the rovers, which further enhance the reader’s enjoyment.