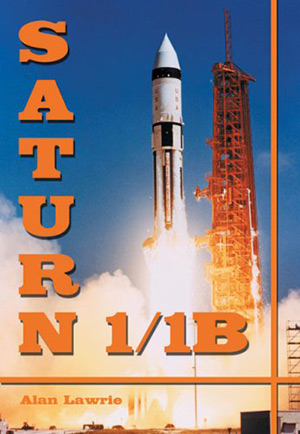 Saturn I/IB is a comprehensive history of the rocket that started the Apollo program on its way to the Moon. Author Alan Lawrie covers the design, manufacture, testing, transport, and missions of the S-I/IB in rarely accomplished detail, which brings the program to life. Founded in July 1960, the George C. Marshall Space Flight Center (MSFC) in Huntsville Alabama managed the program under the direction of Dr. Wernher von Braun.

The completeness of Alan Lawrie’s extensive research and writing makes this history flow smoothly through all phases of the program. He makes it enjoyable and entertaining to follow each stage and engine from its design and construction, to testing and transport by aircraft or barge, and on to its final mission. To complete the chronology our author has included many detailed pictures which help tie the story together, and the included bonus DVD is worth the price of the book on its own. It supplies rarely seen footage, and narration of the assembly, testing, shipping, and launch of the engines and stages.

The S-I/IB stages were built by the Chrysler Corporation Space Division at the Michoud Assembly Facility (MAF) outside New Orleans. The facility’s history is traced back 250 years to Antoine Michoud’s purchase of the original plantation in 1827, while today it is home to the Space Shuttle external tank manufacture. Eight H-1 engines powered the S-I/IB and were built and tested by the Rocketdyne Division of North American Aviation at Canoga Park, CA. They were qualified at four thrust levels of 165,000, 188,000, 200,000, and 205,000 pounds until January 1968. The author gives a complete chronology of each engine from its manufacture, testing, shipping, and whether it was launched or sits on proud display in a museum today. The valuable historical data in this book could be overlooked if it were not for many interesting details knitted into the story by Lawrie.

The S-I/IB stages were transported from the MAF to MSFC for static testing and to Cape Canaveral for launch aboard large covered barges including the Palaemon, Promise, and Orion. Shipping the stages was a major undertaking which included not only moving the massive stages considerable distances, but also measuring and managing the stresses endured by the rocket. Each S-I/IB stage and H-1 engine on the stage is followed from its manufacture, acceptance by NASA, testing, any problems encountered, and its final use. The upgraded S-IB launched several important missions including Apollo 7, the first manned flight of the program, all three manned Skylab missions, and the historic Apollo/Soyuz Test Project (ASTP) in July 1975. The stage originally set to launch Apollo 1 was reassigned after the fire. It launched Apollo 5 carrying the first flight worthy lunar module (LM-1) on 22 January 1968.

Lawrie goes on to tell the story of the S-IV, second stage of the S-I launch vehicle. The stage used six RL-10 engines, which were the world’s first liquid hydrogen/ liquid oxygen rocket engines. Designed by Pratt and Whitney, they were first used on the Centaur upper stage and continue in production today. The RL-10 is planned for use on the Altair lunar lander for NASA’s return to the Moon.

The S-IVB, second stage of the S-IB, was powered by a single J-2 engine with 200,000 pounds thrust, and later increased to 230,000 pounds. The J-2 was also used in the mighty Saturn V. The second stage used a five engine configuration, while a single restartable engine on the third stage propelled Apollo on its Trans-Lunar Injection (TLI). The J-2 was designed and manufactured by Rocketdyne at Canoga Park, CA and tested nearby at its Santa Susana Field Laboratory (SSFL).

The S-IV stage was transported by a modified Boeing Stratocruiser named the Pregnant Guppy, while the wider S-IVB was flown in the Super Guppy. Testing of the S-IV and S-IVB stage took place at the Sacramento Test Operation (SACTO) facility which sat on property purchased from the Mexican government in 1844 and had been mined for gold until 1962.

It should be noted that Saturn I/IB is a companion volume to Lawrie’s seminal work titled Saturn. In Saturn he covers the massive Saturn V Moon rocket in the same exacting detail from conception to launch of each stage and engine. As Allen Taylor states in his 2006 NSS book review of Saturn: “This book is a must have for anyone who is interested in the first part of the long arduous road that the Saturn V launch vehicle traveled on its way to the Moon.” Many people will want to obtain these books as a set since they complement each other and the programs they cover exceptionally well.

Saturn I/IB would be an excellent reference book for any Apollo or rocket aficionado’s library. It is much more than a collection of facts, figures, and historic details. This book is worthy of a place on the history shelves of the U.S. space program. The author leads an educational ride through the Saturn I/IB program reminding us of the stepping stones the rocket provided and the historic flights it launched.