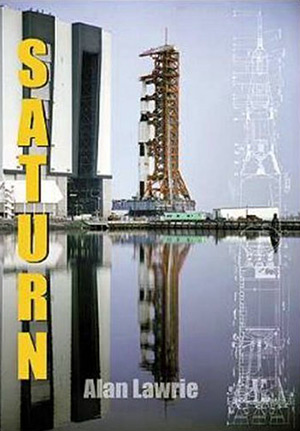 This book, ironically written by an Englishman, is the definitive reference work on what is arguably the crowning achievement of American aerospace technology, the Saturn V Moon rocket. Approximately half of the 328-page book consists of reprints of original documents that had very limited circulation, and that now are virtually impossible to find. The rest of the book is the product of painstaking research by Lawrie that tracks down the construction and history of every major component of the Saturn V that was ever built. Some of these were test articles, some actually flew, and others were either scrapped or ended up as museum displays. It is all here, the complete manufacturing and test records.

The first of the reprinted documents is NASA’s Saturn V News Reference, which was prepared for the press in August 1967. At 125 pages, it provides detailed descriptions of every major component of the Saturn V, along with the function of each. The intent of the document was to enhance the accuracy of accounts of the Moon program that would be appearing in the press.

The second of the reprinted documents is the Saturn V Payload Planner’s Guide, dated November 1965. It was created by the Douglas Missile & Space Systems Division in Huntington Beach, California. For the space enthusiast, reading the Payload Planner’s Guide is a bittersweet experience. It is a reminder of what might have been. In November 1965, no one could have anticipated how short the operational lifetime of the Saturn V would be. Of course the primary objective was to build a vehicle that would launch American astronauts to the Moon. But, beyond that, the vehicle’s designers envisioned the Saturn V as a launch vehicle that would open up the Solar System. They anticipated launching space stations into Earth orbit, large payloads into geosynchronous orbit, probes to all the planets, the asteroids, and into interstellar space. Detailed information is given about the specifications and performance of the Saturn V, so that mission planners could start designing missions that went far beyond footprints and flags on the Moon. No one could conceive then that the United States would throw away the capability that the Saturn V represented after sending only nine crews to the Moon (only six of which landed), and one Skylab space station into Earth orbit. Additional vehicles were built, but never launched. Today they lie on display at the Johnson Space Center in Texas, the Marshall Space Flight Center in Alabama, and the Kennedy Space Center in Florida, bearing mute testimony to a vision that shone long enough to take humanity to the Moon, but then flickered out.

Interesting as the Saturn V News Reference and the Saturn V Payload Planner’s Guide are, the real work that went into the production of this book was the compilation of the material in The Complete Manufacturing and Test Records. Every engine and stage is tracked. We are told where each one started, how it was tested, and in many cases, when it flew. Many engines and stages that were tested never flew. They served an important purpose however, exposing flaws that were corrected in the flight articles that came later.

The book is profusely illustrated, with many photos of transport and testing of components, that have never been available to the public before. In addition to the many black and white photos, there are eight full-page color plates on glossy paper. An additional bonus is a DVD, showing engines being transported, prepared for testing, and test fired. Strangely, these scenes of test operations, taking place at various facilities around the country, are accompanied by an audio recording of the countdown to launch of the Apollo 11 Moon landing mission. The final minutes of the countdown are synchronized with 16-mm-film footage of the launch, up through burnout of the first stage and ignition of the second stage, on the way to the Moon. Views of engine tests graphically convey the awesome power of these engines, and by extension, of the vehicle they would propel beyond the grasp of Earth’s gravity.

Don’t be mistaken. This book is not about the Apollo Moon missions. It is about the solid body of work that went into testing the hardware that made those missions possible. Coverage stops upon delivery of those components to Cape Kennedy, where they were assembled and launched. This book is a “must have” for anyone who is interested in the first part of the long arduous road that the Saturn V launch vehicle traveled on its way to the Moon. The journey started long before the completed Moon ship rolled out of the Vehicle Assembly Building at Cape Kennedy on its crawler and moved toward the launch pad. Many engines and many stages were used up in the testing program, before the parts that ultimately went into Apollo 11 made their historic journey, to the Moon and into the history books.