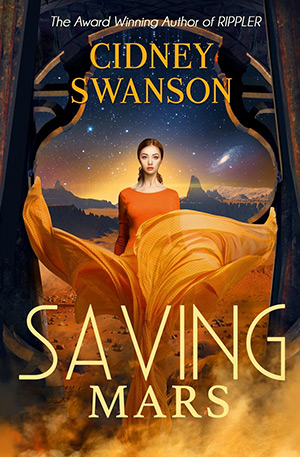 Saving Mars (Book 1 of the Saving Mars series) is a fast-paced story of a young pilot and her autistic brother who must travel from Mars to Earth to obtain the food they need to survive on the red planet.

A war on Earth decades ago left the settlers on Mars, who call themselves Marsians, with only ration bars for food. A “No Contact” law, enforced by a fleet of killer satellites in Mars orbit, blocks communications and trips to Earth. However, every 20 years, the Marsians send a crew to Earth to secretly trade tellurium on the black market for more ration bars.

Seventeen-year-old Jessamyn Jaarda has her heart set on piloting the next raiding ship to Earth. But disobeying an order gets her suspended from training just as disaster takes out their dwindling stockpile of ration bars. When her claustrophobic genius brother is assigned to the crew, Jess is sent along to support him and also to serve as pilot.

They arrive on an Earth where every 18-year-old has their mind transferred to the body of a 54-year-old and vice versa. After 18 years in those bodies, the 36 year-olds transfer to a body of the same age that has been “vacated” by the mentally-aged 72-year-olds being killed.

Thus, the Marsians must keep their identities secret while on Earth or be forced to give up their young bodies. But while Jess is getting a taste of Earth life (that includes both strange foods and Pavel, the handsome nephew of Earth’s dictator), her brother is arrested. Jess must act quickly if she is to save him, but can she do that and also save her people back on Mars?

The story is so nonstop and engrossing that I found myself staying up late to finish it. I’m happy to report that the book comes to a satisfying conclusion, yet left me anxious for the next book, Defying Mars, the second in the series that currently has six books.

For those of us who care about such things, aspects of the Martian environment, including the thin atmosphere and low gravity, are handled nicely and worked into an interesting culture. I especially enjoyed being immersed in the imagined Martian Festival of Singing Ice, with an international blend of races and sharing tea and ration bars. The author also did a good job with the spacecraft piloting scenes, using appropriate jargon, freefall effects, and air pressure issues.

The speculative “downloading” of people’s minds into other bodies is a rather standard science fiction trope that most readers will accept even though it’s hard to imagine that people would ever agree to be killed at the arbitrary age of 72.

The only technical issues I had are not with the story, but the basic premise of fetching ration bars. I can accept that Earth might abandon support for Mars, and that like Mark Whatney, some would find a way to survive. But for thousands of people to survive for many decades, they have to have mastered purifying water and generating air. In the story, they also apparently mine and process a rare and toxic metal (tellurium) into rods (which they trade for food), and create fuel sufficient to fly around Mars and to Earth and back. Yet these people are not able grow a single crop that isn’t toxic: not even algae (though Jess’s mother is working on that)? It would make more sense if the raid on Earth was for seeds because of some crop blight.

But if you just accept the need for ration bars, asking the crew to fetch enough for some 5,000 people for 20 years still doesn’t make sense. Assuming 10 bars/pound with two/person/day, that number of bars would weigh about 7 million pounds! Nothing short of a magic portal will be able to transport that kind of mass.

However, the pleasure of being “re-bodied” into the world of a teen pilot on the space adventure of a lifetime far outweighs (sorry for the pun!) these background issues—which tech-savvy teens might find fun to debate with their peers or (gasp) their parents or members of the National Space Society (which is listed as a resource in the back of the book). The literary critics certainly agree, since the book earned a starred review in Kirkus in 2012 and an SCBWI Spark Award Honor in 2014.