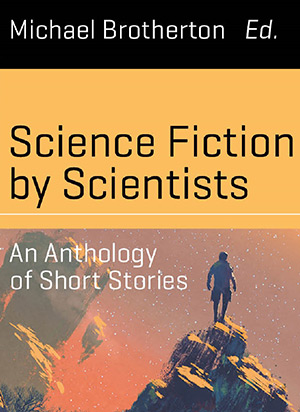 This collection of thought-provoking science fiction definitely includes the science part. The stories are written by fourteen writers who include physicists, microbiologists, and others. Each ends with an afterword where the author discusses the science behind the story and the stretching of it. I recommend this book because it continues the tradition of blending science and fiction, its varying points of view, the unusual situations, and for its playful speculations of how people and other thinking beings may operate in strange environments. These stories explore the creative while keeping it plausible.

Down and Out by Ken Wharton

Intelligent beings live in an underwater world where their gravity is our buoyancy. Their civilization has managed to develop fire and other technology using air bubbles. They use non-vocal means of communication and have a language consistent with a sun-less world, for example yesterflex (instead of yesterday). Ogby eventually breaks through the ice and makes a Copernican-scale discovery.

The Tree of Life by Jennifer Rohn

An unnamed woman virologist crafts trees for making ultra-protein-rich fruit. She receives a mysterious visitor who keeps her company, perhaps as a form of compassion. They converse through thought and she learns he has come to sterilize our world. But the scientist contrives a way to reboot life on Earth when he leaves.

Eve studies the history of supernovas in the galaxy NGC 6946 and uncovers an intriguing pattern from historical and current records. She wonders whether a civilization could and would cause stars to explode and die as a form of music composition.

Two robotic visitors arrive in our solar system and study the protoplasmic life on the third planet. They decode the Internet and learn more about humans. KTG (one of the visitors) proposes an experiment to chat with humans to assess whether we are intelligent or not, based on a methodology similar to the Turing test used in computer science. They discover something quite interesting about us and themselves.

Professor John Wissen struggles with functioning in society after he has been declared legally dead. He attempts to return back to his former work at the university. Can he own property? Should he be patented? What is his legal identity? This is a world where stem cell technology could cause someone who died to sort of act as if alive again. The story unfolds with plenty of twists.

Here is an interesting variant about twins. Stephanie receives mysterious poems and reveals them to her sister Chloe. After a period of separation they re-unite to reminisce, including about the cause of tension between them. Stephanie receives more poems and this leads to considering the personal roles quantum uncertainty and entanglement play in their lives.

Upside the Head by Marissa Lingen

A neurologist heads an investigation into concussions of an ice-hockey star. Team management is unhappy because their star develops other interests due to personality changes. This story explores how our culture with professional sports might change if someone can fix an amygdala like a broken ankle. (The amygdala is responsible for memory, decision-making and emotions.)

An explorer meets a robotic probe from elsewhere at Betelgeuse and they discuss its pending transition to supernova. The story includes philosophical discussions about the origin of life. It is about how two different species might communicate—intelligence being inherently curious, and with the robotic probe discovering more about emotions.

Sticks and Stones by Stephanie Osborn

This is a psychological thriller on the ISS beginning with a strange poisoning incident. The medical officer determines the cause while performing laboratory operations in microgravity. During a synchronized somersault someone kicks Clare in the head. The result is a micro fracture in her skull. More accidents, general untidiness and tensions escalate. Clare finds herself condemned to a terrible fate.

One for the Conspiracy Theorists by Jon Richards

Written by a software engineer, this is an introspective examination of processing a candidate signal during the SETI project, including programming medications and the dilemma of whether, when and how to reveal the signal to others.

Roger, a quantum physicist, is recruited by a psychiatrist to observe a young boy. It appears the boy is communicating with himself in an alternate world. They perform an experiment where the boy will enter an isolated box. When a cat drops down, an LED coin flip determines whether or not the boy shoots the cat with dye from a water pistol. The results lead to further twists.

After ISS has been abandoned, the Chinese take it over. They hire a former American ISS astronaut to help restore it. This restoration has to overcome challenges and fungal growth in particular. The Chinese will move the restored ISS into an Earth-Moon Cycler Orbit. There are cultural challenges but the American forms a close friendship with the pilot of the cycler. The ending is spectacular.

Spreading the Seed by Les Johnson

Humanity has developed near light-speed travel. An upcoming mission will depart to settle exoplanet Kepler 186f. Signals are received from survey probes that have scouted other potential targets for settlement. What they reveal is ominous, something related to the Fermi Paradox—if aliens are out there, why haven’t we heard from them? Still the mission must go on.

The Gatherer of Sorrows by J.M. Sidorova

During a literal elevator pitch, Miss Shelly convinces two biotech entrepreneurs to fund her epigenetic research. The adventure gives her high status but disgrace follows. One of the brothers dies and secrets are revealed causing Miss Shelly to lose her status.