Book Review: Secrets of the Universe 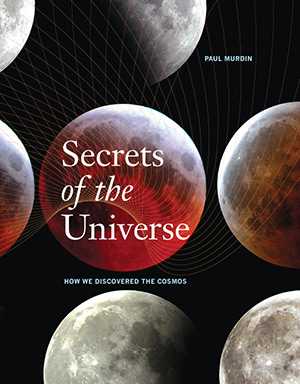 When it comes to books about the history of astronomy, readers tend to expect certain things: plenty of informative text, a handful of explanatory diagrams, and perhaps some color images of astronomical objects.

This isn’t that kind of astronomy book. Murdin’s history is instructive, but it’s also exuberantly episodic and studded with anecdotes, organized by subject rather than mere chronology. If your interest in astronomy has been flagging, this is the book to reignite your sense of wonder.

Part of the charm of Secrets of the Universe comes from its engaging layout: every page is illustrated with resonant, half-tone backgrounds as well as relevant photos and diagrams. Its unique organization also adds appeal. Each section explores a range of “Great Discoveries” related by themes. The first section, “Discoveries Before the Telescope,” looks at the earliest evidence of astronomers at work: from an ancient record of the changing phases of the Moon, carved into a bone 25,000 years ago, to early observations of the Sun and the planets visible to the naked eye.

“Discoveries of the Solar System” looks at how the invention of the telescope in 1609 gave astronomers new concepts to ponder: distant planets and moons, asteroids, comets, and the Kuiper Belt. “Discoveries of the Dynamic Universe” takes readers through early 20th-century advances in modern physics and the discovery of both variable stars and stars that give off energy in the radio and X-ray ends of the spectrum: black holes and pulsars.

“Discoveries of our Galaxy and its Stars” begins with Edwin Hubble’s work with variable stars and the revelation that the Milky Way is but one of billions of galaxies, and moves into stellar evolution, nebulae, and supernovae; the creation of solar systems; and exoplanets. Then, “Discoveries of the Universe and its Galaxies” expands the view outward to look at the weird stuff, from quasars – active galaxies – and the black holes at their centers, to gamma ray bursters and the cosmic microwave background.

A final section is reserved for “Future Discoveries,” a look at the most intriguing mysteries facing astrophysicists today: What is dark matter? If dark energy exists, how do we measure it? What makes gravity waves? How did life begin on Earth, and does it exist on other planets in the universe?

Murdin enhances each chapter with anecdotes and slices of life to enrich his stories. Rival astronomers on opposite sides of a theory about quasars bet a bottle of whiskey on the results. A poster from the 1800s advertises a special memorial to “the Death and Earlier Narrow Escape of a Meteorite Impact Survivor,” a man named John Shipley, who survived a horrific near miss as a boy – and the attendant publicity – to live to a ripe old age.

A faded black-and-white photograph reminds readers of Henrietta Leavitt, an astronomer before women were allowed to be professional astronomers, one of the indefatigable women “computers” hired by Harvard College Observatory at the princely sum of 30 cents an hour to scan thousands of photographs to discover objects of interest.

This is a marvelous overview of astronomy, from its colorful history to today’s hottest topics: stellar evolution and exoplanets orbiting other stars, active galaxies, supermassive black holes, and cosmology. Murdin’s book is that rare popular science work that welcomes browsing as much as it does serious reading. This is a storyteller’s history of astronomy, constructed like a collection of short stories that invites readers to delve into it at any point. Murdin approaches each subject with passion, insight, and explanations that make the most complex topics – relativity, gravitation, cosmology – not just accessible, but completely absorbing.