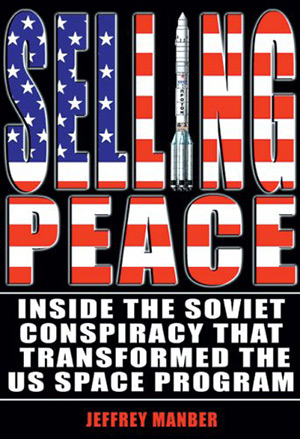 Today, when space commercialization is a hot topic in US space policy, Jeffrey Manber’s book Selling Peace: Inside the Soviet Conspiracy that Transformed the U.S. Space Program provides a first-hand account of selling space goods from an unlikely source: Russia. The title is somewhat of a misnomer, since there was no concerted effort to transform or circumvent NASA policies. It is just the opposite — as Russia was emerging from Communism, the head of a major Russian manufacturer observed capitalism in the United States and wanted to institute it in Russia. He saw this as a necessity both for his company and Russia as a whole to survive in the growing international space products market.

The book, which was both easy to read and interesting, provides a personal recounting of the author’s relationship with the officials of NPO Energia (now RKK Energia) over a 14 year period. Mr. Manber was well respected by the Russians in this unique manufacturing firm, which is now involved in communication satellite development.

The reader becomes quite familiar with the cast of characters, gleaning insight into their personalities and passions through the eyes of the author. In addition, the reader also feels the drama and frustration that the Russians feel in their attempts to commercialize their products.  Mr. Manber was able to explore the workings of governmental bureaucracy in both Russia and the United States, allowing the reader to understand how officials were able to work through the politics and policies on both sides.

Mr. Manber’s relationship with the Russians began when he was an employee of the Office of Space Commerce, a section of the Department of Commerce which was designed to promote space commercialization. He was initially approached by Payload Systems, an American company seeking to perform a scientific experiment in space. NASA at the time was focused on Space Station Freedom and the beginnings of the Shuttle program. Mr. Manber, along with several colleagues, was instrumental in securing an export license for Payload Systems to fly the experiment on Mir.

As a result of this endeavor, Mr. Manber was asked to establish an American office of Energia by Yuri Semenov, Energia’s General Director. Semenov was the Chief Designer and Developer of the Soyuz, Salyut, Mir, and Buran programs as well as SeaLaunch. Named General Director of NPO (“Scientific Production Association”) Energia in 1991, he also oversaw the company’s reincarnation into RKK Energia and became its president in 1995. Not only did the author promote Energia in the United States, he also educated the Russians in how the American economic system worked.  As the American spokesperson for the Russian company, Mr. Manber helped to create information sharing meetings between the United States Government, NASA, the Russian Space Agency, and Energia scientists and engineers.

In 1999, with Russia focused on its membership in the ISS, Mr. Manber was approached by multimillionaire Walt Anderson with the incredible request to broker the sale of the aging and decaying Mir Space Station to him. While the sale proved not to be doable, Mr. Manber became the Chief Executive Officer of MirCorp, whose goal it was to lease Mir from Energia and sell services on it.  Some of the possible services discussed were: James Cameron filming a story on the station, private entrepreneurs paying to live on the station (for example, Dennis Tito who later paid for a journey to the ISS), and companies using the station for zero gravity experiments. But the project of commercializing Mir was doomed by infighting between the Russian government and Energia as well as significant pressure from NASA. Only one commercial mission was launched to Mir, with cosmonauts living on the station for two months performing prepaid experiments. Several months after this mission, Mir was deorbited over the Pacific Ocean.

Readers will find this book a good presentation of a period when Russia began its transformation from a Communist economy to a more open player in the international market for low-cost, efficient space goods.  The book is timely as the US looks to private industry to fill the void in ISS re-supply and space transportation once the Shuttles are retired. Perhaps Russia, with its variegated economic and space development history, could provide insights on how to commercialize space, not just for US companies, but for the nascent space industries in China and Russia.

The book includes 34 photographs, an index, and suggestions for further reading.