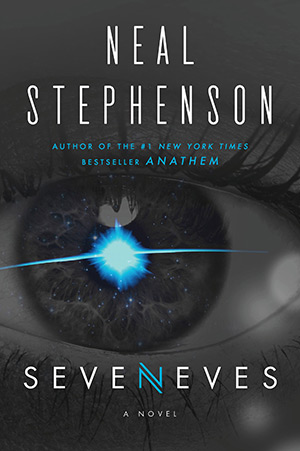 This very long and detailed novel starts literally with a bang as the Earth’s Moon is torn apart by some unknown force. At first, mankind views it with awe. But this changes to fear as scientists determine that the resulting pieces will continue to fragment and then rain down upon the Earth in two years. The resulting “Hard Rain” will be a mass extinction event which will destroy the entire biosphere. It is estimated that the Earth will be uninhabitable for thousands of years.

There is surprisingly little panic as NASA, ESA, Russia, China and private space firms all rush to create and send to orbit as many supplies and small tin can “Arklets” as possible. Before anything can arrive and dock with the ISS, however, a crash expansion of docking ports is required. Astronauts are sent up with semi-suicidal one-man bubbles which they can use as a base for spacewalks since the ISS is not set up to support additional crew. Then, the main specialists arrive in the next set of rockets to assemble additional ISS living space and a torus to provide artificial gravity. Finally, the “General Population” or GP, is launched. These are the majority of the survivors of the disaster, and they arrive in space and live in seven-man Arklets. Each country selects two of their best children for space training to form the GP. The overall plan is for the Arklets to fly formation with the ISS and group themselves as triads or heptads, allowing this “Cloud Ark” to more easily outmaneuver incoming Moon rocks and to minimize fatalities if a grouping is hit.

The author, Stephenson, spends the first two thirds of the book, or 600 pages, describing in detail all of the hardware and space activities required to save a small portion of humanity. Included are side stories of desperate attempts to retrieve a piece of a comet for fuel and arguments among the “Spacers” about whether to stay in place, head for “clear space,” try to land on a large fragment of the Moon to hunker down, or even to attempt to colonize Mars. This section comes to a close as the meaning of the book’s title, Seveneves, is revealed and sets up the final third of the novel.

The book then jumps ahead 5,000 years. The Spacers are now three billion strong and have split themselves into seven races via genetic engineering. They have returned to Earth and have been seeding it with flora and fauna to make it habitable once more. Again, the author goes into great detail about the “Ring Habitats” they have built surrounding the Earth to the point of giving names to each of the sections and sub-sections. The seven Spacer races have now split into two factions, Red and Blue, and each attempts to out-colonize the other in near Earth space and on the newly terraformed planet. Each faction employs space tethers, mini robots, and propaganda as the groups vie for supremacy.

NSS members will no doubt enjoy the first part of the book. Plenty of near-Earth space activities are described in great depth, and the inevitable crises are overcome with ingenuity. Although the characters are a bit one-dimensional, each is consistent and plays a vital part in the story, with a number of surprises introduced. The last part of the book is a bit jarring as it starts with a diagram of the habitats surrounding the Earth in a ring 5,000 years from now. It even includes color codes showing which races live in which habitats. People who enjoy detailed world building will like this section, as there are many long descriptions about how the inhabitants live and move between the abodes of the ring and the surface of the Earth. However, some readers may get overwhelmed with all of the extraneous items that are introduced that are not integral to the plot. Eventually, the two factions make a surprising discovery on the planet, and the novel ends with a hopeful plan for humanity to move forward into the future.

This novel is perfect for those who like long, detailed, epic, grand, near-Earth space adventures.