Book Review: Shanghaied to the Moon 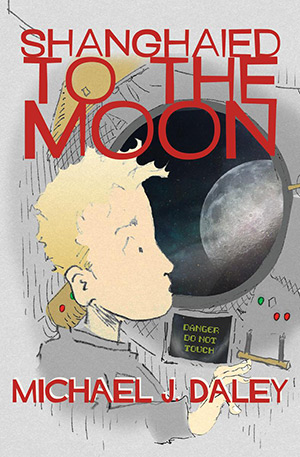 All Stewart wants for his 13th birthday is his father’s signature on an application to Space Academy Camp. But his father is on a business trip to the Moon that Stewart thinks was timed to avoid a confrontation over Stewart’s reason for wanting to go to camp: he wants to be a rocket pilot. To follow this career path, he must pass an entrance exam during his 13th year, and Stewart sees camp as his last chance to get the training he needs. He idolizes a famous rocket pilot named Val Thorsten who flew many harrowing missions (made into “3-Vids” that Stewart “flies”) and disappeared while testing a new rocket design.

Stewart’s mother was also a rocket pilot. She died in an accident when he was six. He sees a holographic counselor to help him deal with the lingering trauma. Despite watching a “holo” of the accident that shows him watching the crash with his father, he can’t actually remember being there or feeling anything. He continues to have nightmares and occasional “squiggles” of memories of his mother.

After an unproductive session with the holographic counselor the day before his birthday, Stewart visits the space port. He meets an old spacer who offers him a job as a cabin boy on a trip to the Moon. The man tells Stewart that counselors make you forget. Stewart checks out this assertion when he gets home, and finds his computer is blocked on the topic of memory suppression. That night, he has another nightmare and then recovers some memories of his mother when he smells pancakes his brother makes for his birthday breakfast.

Stewart confronts the counselor, demanding to know why he has so many holes in his memories, and discovers that his visit to the space port was recorded on video and that his computer is bugged. The holographic counselor forbids him from seeing the spacer again, refuses to answer his questions, and won’t stop playing the holo of his mother’s crash. Stewart loses control and smashes the projector. A human counselor arrives with a needle, and he trips her so that she injects herself. Then he flees to the space port.

The spacer and Stewart launch into space and a series of adventures that lead them to the Moon and an understanding of what really happened to Stewart’s mother and Stewart’s hero, Val Thorsten.

Information is revealed in perfectly calculated doses to keep the story moving and not give away the conclusion. The technical issues faced by the characters and their resolution of them were all believable, with some exceptions.

One major error and a disservice to children is the use of the incorrect notion that there is a dark side of the Moon. On page 41: it says “The light side was declared off limits to more development.” When the Moon is between the Earth and the Sun (a new moon), the side facing Earth (the near side) is dark, and the side facing away from Earth (the far side) is in the Sun and would be ”the light side.” When the Moon is on the opposite side of the Earth from the Sun (full moon), the near side is the light side. So, the statement on page 41 means the whole Moon was declared off limits to development! I think the author may have meant “near” instead of “light” side, but this blatant mistake almost caused me to give up on the book. The story kept me reading, but I was dismayed to discover the error repeated on page 231 when the father refers to a “hideout on the dark side.”

One other bit of inaccurate science is in the discussion of why they are running out of air. On page 163: “It’s the oxygen. Most of it vented when we overheated leaving orbit.” Overheating the outside of the shuttle does not vent oxygen! Overheating could build pressure in oxygen tanks, but they would have to explode to vent.

I read a review copy that came with a disclaimer that some changes had yet to be made in the final galleys. Maybe they will correct the above problems and fix the typos on pages 24, 93, 136, and 235.

One neat idea that space enthusiasts may appreciate is on page 40 in a discussion of the Apollo 11 flag. The author speculates that because this flag fell over during the crew’s launch off the Moon, that it was covered with dust and thus protected from the bleaching effects of the Sun’s UV radiation. The other flags are expected to have faded to gray and white by now. I hope that one of the young readers of this book will find the answer to this question for all of us!

Overall, Shanghaied to the Moon is an excellent science fiction adventure appropriate for middle grade and young adult readers. The characters are captivating, and the story a thrilling read with a satisfying conclusion that nonetheless allows for a sequel. I highly recommend this book, but please do inform children that there is no dark side of the
Moon!