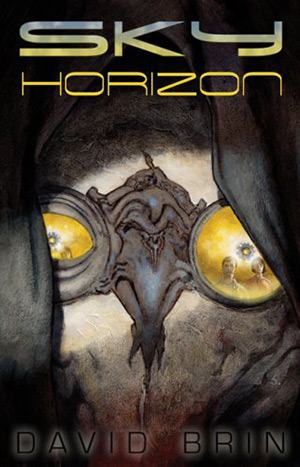 The main character is high-schooler Mark Bamford who has moved all over the world with his military father and recently relocated to Twenty Nine Palms, California. His friends consist of two Junior Engineers; female Alex, who is also on the varsity climbing team with him, and Barry who is part of the Math Club. The story opens with the rumor that Barry’s Math Club buddy has made first contact with an alien. When the rumor turns out to be true, and the alien is abducted by the high school jocks, Mark must choose between doing the right thing and being popular. His choice leads to serious consequences for him, his friends, and the whole human race.

The descriptions of the unusual setting in this book brought back vivid memories of a pleasant school visit I made to Twenty Nine Palms in 2001. I was reminded of the Joshua trees and the military firing range. I also was reminded of the clear night sky, and thus had no trouble believing that some “army brats” would be capable of tracking a meteorite (that turned out to be a spaceship).

The three main characters and all the secondary characters being white didn’t match up as well with my memory of the diverse student body I encountered there. I hope that the series will reflect the large number of Hispanic and black students attending school in Twenty-Nine Palms.

The main character was unusual in another way: his positive attitude toward his father and the military. I found this viewpoint refreshing, but if modern teens have indeed been brainwashed by movies to be suspicious of authority—an assertion made by the history teacher in the book—they may find this point of view hard to accept. This suspicion of authority drives the plans the math geeks and the jocks have for the alien, and despite how silly they seem, Mark’s handing the problem over to adults is hard to understand. My primary disappointment with the book is that this crucial decision, and the reasoning behind it, is “off stage.” The history class discussion reveals why Mark—who has been living abroad and thus apart from the propaganda machine—might have a different perspective. But it doesn’t explain why Alex and Barry would go along with him.

The actions taken by the authorities sounded plausible, though I question the decision to invite the aliens to land in New York City. The one thing Americans distrust more than their own government is the government of anyone else, yet they took the aliens’ word for it that despite their comrade crashing down randomly in California, they would land precisely in crowded and historic NYC and not cause any damage. However, teen readers may accept this choice as politically justified, and enjoy a setting familiar to many of them. A more puzzling choice was to have the teens, and thus the readers, watching the events in NYC remotely on television. This separation from the action also separates the reader from any real emotional involvement.

This book is listed as young adult, but at 120 pages, I feel it is more appropriately targeted to middle-grade readers. There is no sex or violence for parents of younger readers to worry about.

I expect this series will address the technical and social challenges of sustaining life in a new environment and thus be exactly the kind of series that space enthusiasts will loudly applaud. I agree with the reviewer from Publishers Weekly who stated that this book is “not much of a stand-alone story,” and that Brin fans are the only ones likely to “pony up” for the expensive hardback. However, considering the award-winning track record of the author, this series has at least a good chance of becoming popular among young readers. In that case, Sky Horizon, especially the first 1,500 signed copies, could easily become a collector’s item well worth the investment.