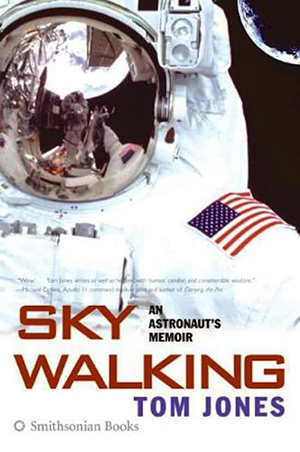 If recent biographies are an indication, space shuttle astronauts can be divided into at least two categories: irreverent space cowboys or choirboys who approach near-Stepford perfection. Forget the artificial distinctions of commander, pilot, mission or payload specialists. The real difference among the astro set rests in attitude, character and personality, and by those measures, the author of Sky Walking: An Astronaut’s Memoir most definitely belongs in the choirboy category.

By any measure, and especially by the standard of some of his colleagues, the author, Tom Jones, is a loving husband, devoted father, supportive colleague, patriot and devout Catholic— like someone straight from the pages of Life magazine, circa 1960. If this self-portrait is accurate, Jones is everything an astronaut should be, or so we once thought.

He’s the antithesis of his 18th-century namesake. He is, in fact, almost too good to be true. Unfortunately, that verdict doesn’t extend to his new book. Reading Sky Walking is a bit like eating unflavored porridge. Filling, yes, maybe even good for you, but (with the exception of the brief epilogue) bland, unappetizing and lacking seasoning or flavor. In a word, it’s unsatisfying.

Despite its flaws, Sky Walking does, in all likelihood, genuinely reflect the sensibilities of the author. Most people interpret even novel events through their personal prism, which reflects their own experiences. It is no accident that Yuri Gargarin, the first man in space and model for the new Soviet man, declared upon returning to Earth that he had seen no angels in the heavens.

Jones, by contrast, sees signs from his Creator from the space shuttle’s cabin. “Pure radiance from the risen sun streamed through Endeavor’s forward cockpit windows and bathed us in its warmth,” the author writes. “What else could it be but a sign?—God’s gentle affirmation of our union with Him.” Looking through tears at the palette of crystal blues in the ocean below, Jones’ crewmate (who was also a Eucharistic minister) remarked, “It’s the blue of the Virgin’s veil, Tom.” Later, when high winds threatened to delay a shuttle landing, the author half-seriously suggested intervention by St. Joseph of Capistrano—the patron saint of astronauts. It couldn’t hurt.

Despite initially promising his wife, “Four years, two flights, and we’re out,” Jones ultimately flew four space shuttle missions—two of them, STS 59 and 68, a mere four months apart. Perhaps only a saint or ascetic could have stomached back-to-back flights, but fortified by faith and spousal support, Jones cheerfully accepted his assignment to the pair of radar-mapping missions because he was the “only man available.”

Maybe it was the author’s prayers, or maybe just dumb luck, but Jones survived his share of potential space disasters—a launch pad abort on STS 68 due to a faulty turbopump, and a hydrogen leak on STS 80. Add to that list debris strikes on ascent and an ammonia leak during a spacewalk and you get the picture. There was ample opportunity to be killed on the ground, too. Jones describes a vacuum chamber test in which a spacesuited technician suddenly loses suit pressure. The last thing the tech remembered before blacking out was saliva boiling off his tongue.

Bureaucratic dangers abounded as well. On STS 98, Mark Lee, Jones’s original EVA partner, was abruptly bumped from the flight because [the author intimates] of a recent divorce from fellow astronaut Jan Davis. Perhaps being a choirboy was the only safe path to orbit. Whatever the reason, the author expresses deep disappointment in “NASA’s inability to deal straightforwardly with the finest, most devoted group [he] ever worked with—the astronauts.”

NASA’s bureaucracy was bad, but Jones suggests that working with the Russians on the International Space Station [ISS] required the patience of a saint. The Shuttle-Mir experience did little to inspire confidence in the new space station partnership. The Russians were rightly proud of their long-duration spaceflight experience, but a dozen years after its launch, Mir was a Potemkin Village hiding a slew of potentially fatal defects. Worse, the Clinton Administration’s Faustian bargain of salvaging the ISS by “working with the creaky Russian space establishment [almost dragged]…the entire program down.”

“Tell them what they want to hear; do what you want to do” was—according to Jones—the general Russian philosophy. However, many in the Astronaut Office and NASA’s ISS management didn’t like what they were hearing from Moscow. A toxic brew of delays, culture clashes, uncertain finances and the Russian penchant for secrecy threatened the International Space Station from the beginning. On one occasion, NASA officials were denied even a peek at the Russian-built Service Module because “it was past 4 p.m. [and] the factory was closed.” Even astronaut Bill Shepherd, the commander who would lead the first crew to ISS, had trouble getting access to the Service Module for training. Shepherd threatened to “come home” unless things changed in a hurry.

The one saving grace of Sky Walking is Jones’ behind-the-scenes account of the tug-of-war that marked the early construction of the ISS. Additionally, in the closing pages of his book, the author presents a cogent analysis of NASA’s new space exploration initiative, and offers a few sound suggestions—accelerating the Crew Exploration Vehicle (CEV) and visiting lunar orbit and Near-Earth asteroids—to make the space program exciting and popular again. Realizing that vision will require a giant leap of faith, and maybe even a few well-directed prayers. It couldn’t hurt.