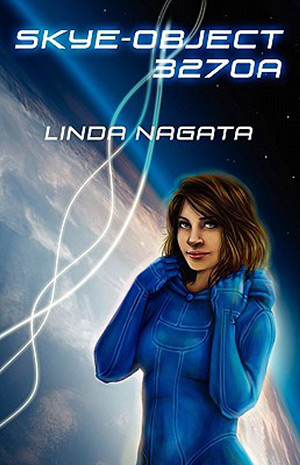 Teens bungee jumping from a space elevator, exploring a planet with hostile alien animals, and solving the mystery of how one girl became the sole survivor of an alien attack are all part of Skye Object 3270A.

In a far future world, humans have expanded throughout the galaxy and settled on many worlds. However, starship-destroying weapons left behind by an extinct race (the Chenzeme) have curbed further expansion. Prior to the discovery of Sky Object 3270A (a lifeboat containing a two-year-old girl suspended inside it), no living thing has ever been known to survive an encounter with one of these weapons. All starships carry such lifeboats for emergency use, but never before has one actually escaped destruction.

The girl rescued from the lifeboat is named Skye and grows into a precocious 14-year-old who lives in Silk, a colony attached to a space elevator above the planet Deception Well. In Silk society, people live hundreds of years because of self-repairing nanos. Anyone between 14 and 100 years old is considered an “ado,” short for adolescent.

The book opens as Skye becomes an ado, and she and her friend Zia celebrate by performing a record-setting “bungee jump” down a segment of their space elevator. Her shape-changing Dull Intelligence (DI) named Ord, which is anything but dull since it is always connected to the city’s equivalent of a galactic Wikipedia with instantaneous search capabilities, wishes to join her. Ord can’t function in a vacuum, so Skye attempted to leave it behind. However, it stubbornly followed her and was picked up by Buyu, a male friend that Skye finds both annoying and helpful.

At the end of the jump, the teens witness the elevator defense system zapping a large object that threatens to hit the elevator. This gets Skye to wondering why her lifeboat, a similarly-sized dark object that was invisible until it sprouted a light sail, was the only one ever found. Could there be others out there that just can’t be seen? Her light sail was shredded by some automated gnomes that are all that remains of a defense system against the Chenzeme created by a different set of extinct aliens. The humans on Silk rescued Skye’s lifeboat from those gnomes.

Skye sets up a meeting with an astronomer to discuss ways to look for other lifeboats before they reveal themselves with light sails. The astronomer turns out to be a handsome ado named Devi who is just a few years older than she is. He tells her that because they are ados, it will be very difficult to get the City Council to take her proposal to look for lifeboats seriously. But he agrees to help her regardless. They go to discuss their plan with Zia and are harassed by a drone camera badly controlled by Buyu. Skye gets hit in the face. When her nose doesn’t heal almost instantly via the nanos like everyone expects, Ord uncovers something different about her blood. This difference may explain where she came from and why her lifeboat escaped the Chenzeme. However, this difference will also kill her in a week unless she gets a treatment that the adults are sure not to approve in time to save her.

The four teens jump into action to save Skye and locate any other lifeboats like hers. These plans involve dangerous trips to the surface of Deception Well and to the “Construction Zoo” at the other end of the elevator where a new starship is being built.

Author Linda Nagata puts her degree in zoology, work experience with computers, and life experience growing up in exotic Hawaii to imaginative use throughout the story, creating fascinating new creatures on the planet and in space that are a mix of biology and technology in unique environments. The teens, fearful that adults will not listen to them or act quickly enough to save Skye, behave in a very believable way—taking risks for reasons that will make sense to most any young adult today.

The story has plenty of cool world-building, new tech, adventure, alien creature encounters, and a touch of romance (limited to kissing) that are sure to appeal to young readers, both girls and boys. Adult space enthusiasts may also appreciate this unique view of what family life may be like in a future society where people have faced extinction and yet live hundreds of years.