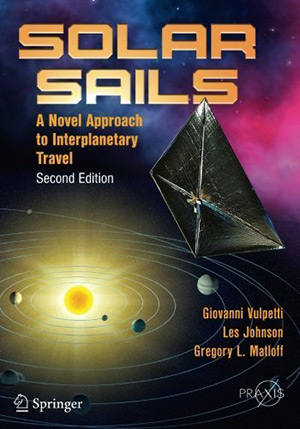 Several books have become definitive texts about space hardware, such as Gerard K. O’Neill’s The High Frontier, about orbital habitats; Robert Zubrin’s The Case for Mars, about Mars exploration; and Eugene Mallove and Greg Matloff’s Starflight Handbook, about interstellar travel. I believe Solar Sails: A Novel Approach to Interplanetary Travel will become a classic on the subject of solar sailing.

Like many space fans, my first exposure to solar sailing came from science fiction, specifically The Wind from the Sun by the late Sir Arthur C. Clarke, which featured a race between solar-sail-driven spacecraft. However, these authors make clear that, despite technical setbacks having nothing to do with the sail itself, this new technology is far from science fiction. So what, exactly, is solar sailing, and why should space advocates give it their attention?

A solar sail is a molecules-thin but meters- or kilometers-wide structure composed of reflective material that is propelled through space by the impact of photons from the sun. The authors explain that photons have no mass, but plenty of momentum which, when applied to a massive, lightweight sail, would be sufficient to propel the sail and a payload through space. As the light from the sun continues striking the sail, the solar sail spacecraft enjoys the benefit of constant acceleration.

However, there is some bad news: the sail’s acceleration diminishes due to the inverse-square law, which states that the amount of light striking the sail decreases at a rate of 1/n2, with n2 being the distance of the sail from the sun multiplied by itself. Solar sails also lack the excitement of conventional chemical rockets. The authors note that a solar sail traveling at one astronomical unit (A.U.) from the Sun (the same distance as Earth) would have a base acceleration of 1/60th of a gravity. Solar sail travel is not for the impatient.

Solar sails do offer numerous advantages over chemical rockets or other, more exotic propulsion systems such as nuclear power. Quoting from the authors’ explaination:

As a work of literature, Solar Sails benefits from clear prose. The authors include Greg Matloff, whom I already mentioned as one of the authors of the Starflight Handbook, Italian astronomer Giovanni Vupletti, and Les Johnson, whom I’ve had the privilege to talk with at Marshall Space Flight Center and at a science fiction panel this year. Johnson himself has had plenty of practice explaining this rather techie piece of hardware — in fact, he’s currently featured in a video on the subject being shown at the U.S. Space & Rocket Center here in Huntsville, Alabama. The tough part for non-scientists is Part Four of the book, where Johnson and his coauthors delve into the equations and technical hardware needed to make solar sailing a reality.

I asked Johnson where solar sails might fit into space settlement activities. He admitted that solar sails would not be well suited to human exploration and settlement. However, he did believe that solar sails could be used as station-keeping devices for hardware supporting space settlement. For instance, a solar sail-enabled observatory could send warnings about solar storms to orbiting habitats. In the long term, solar sails also can serve as slow-boat propulsion devices for spacecraft or cargo that are not in a big hurry to arrive. Traveling inward from Earth, they could serve as braking devices for orbiters or landers heading for Mercury or Venus.

Perhaps the most intriguing use of a solar sail would be as propulsion for exploration missions. First used in science fiction in a novel by David Brin, a “Sundiver” vehicle would use conventional propulsion to “dive” close to the Sun, around 1/10 of an A.U., then deploy its solar sail to get the maximum exposure to sunlight before heading off to the outer reaches of the solar system or even another star. This technique would probably be used for robotic rather than human explorers, but the knowledge gained from these long-distance probes could inform future human expeditions.

Another science fiction book that uses solar sails is The Mote in God’s Eye
by Larry Niven and Jerry Pournelle. Rather than depend solely on natural sunlight, which diminishes with distance, the alien race in that book uses orbiting lasers to propel their vehicle beyond their solar system. The problem with such a laser, as Johnson, et al., note, is that a laser powerful enough to drive a large solar sail between suns also could have military applications on Earth. Therefore, they suggest placing such a laser station out by Jupiter, away from Earth and near the Jovian magnetosphere, which could serve as a source of power. This is another fine aspect of the book — the authors’ acknowledgment of political realities that could interfere with some of these projects.

What I like best about Solar Sails is that, aside from serving as a guide for engineering students who might be interested in building solar sails in the future, it also can serve as a reference for aspiring science fiction writers. It explains the causes and effects of various sail materials, shapes, control systems, and trajectories, allowing the SF writer to more fully imagine how their fictional vehicles might fly. The clarity of this book’s writing and technical insight also enable space advocates to consider realistic scenarios for using solar sails to explore and develop the solar system.