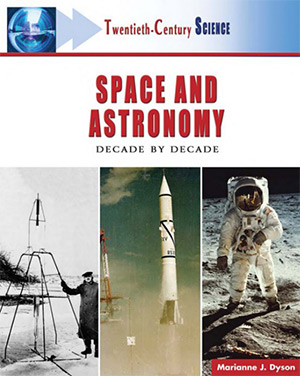 It’s a little early for Christmas shopping, but I’ve found the perfect gift for any bright child or grandchild who has the slightest stirring of curiosity about the stars and space. It’s Space And Astronomy: Decade by Decade by Marianne J. Dyson (Facts On File, 284 pages, $49.50).

Space And Astronomy is nothing less than a very readable, very informative, and very enjoyable history of what has been accomplished in studies of space and astronomy in the 20th century. That’s an enormous subject, but Dyson deftly breaks it up into easily understandable bites.

I have a special interest in this history. I was a junior technical editor on the Vanguard project, the first official U.S. program aimed at placing artificial satellites in orbit. Most of the world thinks of Vanguard as a monumental flop, because the first attempt to launch a Vanguard satellite ended in an ignominious explosion of the launching rocket a bare few feet above the launch pad.

Dyson treats Vanguard fairly, and points out that the first Vanguard satellite to attain orbit helped geophysicists determine the true shape of the Earth. Our planet is somewhat pear-shaped: the southern hemisphere, mostly ocean, bulges slightly.

It was a fascinating century, from beginning to end, and Dyson captures the awe-inspiring discoveries and achievements very capably.

Think about it. In the year 1900 nobody knew what made the Sun shine. Neptune was thought to be the farthest planet in the solar system: Pluto wasn’t discovered until 1930, and the vast Kuiper Belt of thousands of icy and rocky bodies that orbits in the outer reaches of the solar system was totally unknown.

Albert Einstein was a lowly patent office clerk in Switzerland when the century began.

No one knew whether the Milky Way encompassed the entire universe or whether there were other galaxies beyond it.

During the 20th century, astronomers discovered that the universe is vastly larger — and older — than anyone had imagined. Physicists learned about nuclear energy. The Sun and stars were revealed as nuclear furnaces, converting hydrogen into helium and releasing prodigious energy in the process.

The Wright Brothers flew the first heavier-than-air craft in 1903. Robert Goddard launched the first liquid-fueled rocket in 1926, from his aunt’s farm in Massachusetts. Neighbors complained about his noisy experiments, so Goddard moved to the empty desert of New Mexico. Today, one of the nation’s first space ports has been established there.

Two World Wars racked the planet but forced advances in airplanes, rockets and electronics. After World War II, astronomers began using radio telescopes to open up a new window on the universe. Rockets grew powerful and accurate enough to begin launching artificial satellites into orbit around the Earth. And beyond. Space probes went to the moon, to Mars and Venus and in the 1970s to Jupiter and Saturn.

Sixty-six years after the first Wright brothers’ flight, Neil Armstrong and Buzz Aldrin set their booted feet on the dusty surface of the moon. Before the century ended, unmanned spacecraft had visited every planet in the solar system, and another one was being prepared for the long journey to Pluto — which was eventually downgraded from its status as a planet to a “minor planet.”

In Space And Astronomy Dyson shows all these accomplishments and many more. More important, she shows the men and women who made the discoveries, invented the hardware, pushed back the darkness of ignorance.

Her book puts it all in context, and makes sense out of what might have been — in the hands of a less competent writer — a bewildering jumble of facts and dates. The book is abundantly illustrated with portraits of the scientists and engineers, diagrams of the telescopes and rockets, charts and graphs that show how this fascinating history unreeled, year by year.

Give the youngsters in your family — and yourself, as well — a special treat with this very special book.