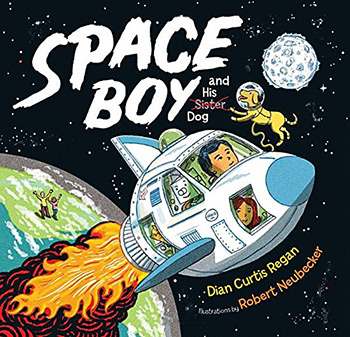 A boy and his dog and robot set out for the Moon with their mission to rescue a lost neighborhood cat. They soon discover that his sister has come along as a stowaway. The boy insists that his sister is not supposed to be part of the story and tries to accomplish his mission without her.

While the boy and his dog search the “Moon” unsuccessfully for the cat, the sister uses dog treats to find the cat. The sister wants to play with the cat a while, but the brother insists it should be returned to its owner (on Home Planet) right away. He takes the cat in his spaceship and leaves his sister “stranded” on the “Moon.”

He soon regrets abandoning her, and decides to be the hero and rescue her. But the sister refuses to be rescued. So the boy flies home and lets her find her own way.

The book ends with both siblings returning the lost cat to its owner. So the boy accomplishes his “mission” with his sister’s help and (hopefully) learns that the best way to solve problems is to work as a team.

This story is more about sibling rivalry than  about space, but I must give the artist, Robert Neubecker, credit for including all the major differences between Earth and the Moon in his art so that adults reading to children can point them out. For example, the boy uses a spaceship that has a rocket engine to travel to the Moon. The Moon’s surface shows it to be realistically gray and pockmarked with a black sky (though stars would not be visible because of the glare of the bright surface). A full Earth is visible in the illustration, which indicates the story occurs during new moon (the only time a full Earth is visible from the near side). Earthshine is so bright, that it could produce shadows like those shown and is considered a good time to do spacewalks. Importantly, the art and text show and say that the boy and his dog are climbing mountains and exploring deep craters—features that really exist on the Moon. Also, the dog and robot are shown jumping very high, demonstrating the low gravity.

The one scientific inconsistency which is obviously put there on purpose for children to notice is that all the characters except the cat (and the robot who doesn’t need one) are shown wearing helmets on the Moon. Children who “know” that there is no air on the Moon will notice this discrepancy and feel extra smart because they caught this “mistake.” When they plan their own missions to the Moon, they will know to have helmets for everyone!

Author Diane Curtis Regan smartly divided the story into eight parts with numbers and titles such as “1. A New Mission,” and “2. To the Moon!” The titles explain the main plot points of the story (reinforcing vocabulary building) and have the added benefit of preparing preschoolers for chapter books later.

I recommend this light-hearted story to all future astronauts and their brothers and sisters, too!