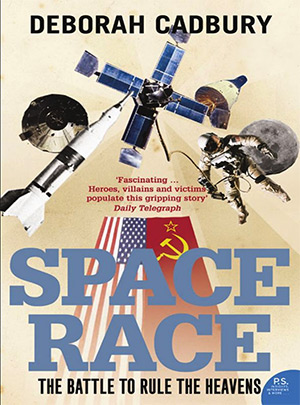 Pity the one-dream man, Robert Goddard once confided to his diary. His life — his dream — is not his own. He is a prisoner of that dream, shackled to its fortune. Pity the one-dream man especially, it would seem, when that dream lies at the confluence of ideology, military strategy, state ambition, and the megalomania of dictators.

In Deborah Cadbury’s new book, grandly titled Space Race: The Epic Battle between America and the Soviet Union for Dominion of Space, Cadbury traces the trajectory of two dreamers on opposite sides of the “battle” for the heavens. In one corner, the charismatic Wernher von Braun, and in the other, his rival, the obscure Russian engineer Sergei Korolev, known simply as “the Chief Designer.”

Nothing could be grander than an epic tale of rivals who stormed the heavens, Homeric in scope, humming with the electricity of those fateful days. Unfortunately, Cadbury, a BBC producer, delivers a disappointingly pedestrian, almost mechanical, account of this epic tale, and succumbs to the current European tendency to disparage American achievements.

Despite its many flaws, Space Race does manage to carry the reader along on the strength of the underlying narrative, and expose the cost of each man’s dream — personal, professional and, in von Braun’s case, moral. Korolev, for his part, was denounced by a colleague — during Stalin’s purges — and sent to die in the notorious Kolyma concentration camp. For most, life at Kolyma was brutal and short. Regular beatings cost Korolev his teeth; he survived on cabbage soup and gruel so thin he developed scurvy. Then some sort of miracle occurred — he saw a loaf of black bread by a well. It was still warm. He survived, and was politically “rehabilitated.”

Although drawn by the same dream, von Braun and Korolev could scarcely have been more different — antipodes really — geographically, physically, culturally, and — the author implies — morally. Von Braun was the aristocratic charmer, with movie-star good looks. Korolev, in contrast, was the personification of the proletariat, with his broad Slavic face, as Russian as the black bread that saved him.

But the differences went deeper. Cadbury implies that von Braun was, at best, an amoral opportunist, whitewashed by his American masters. At worst, he was a charismatic ex-Nazi who had worn the “Death’s Head” insignia of the SS and toured the Mittelbau Dora concentration camp in search of skilled inmates for V2 rocket production. For the author, von Braun’s dream was born in a nightmare. Later von Braun and his rocket team would labor in the desert for the U.S. Army. However, for Cadbury, the ritual cleansing power of the White Sands desert could never shake the link with von Braun’s Nazi past. While Cadbury shows little pity for von Braun, Korolev — having survived the purges — is seemingly absolved of designing rockets for the monster Stalin.

In reality, both von Braun and Korolev faced moral quandaries, and, for both, the dream of space travel outweighed the cost. And because of fate or chance, both men were at the nexus of superpower competition, which tested political will, technological expertise and economic prowess. But whereas von Braun had inherited —in Cadbury’s phrase — the “great industrial beast” of America, Korolev was hindered by a lack of funds and petty jealousies.

Funds for his space program were distributed in the spirit of the Soviet folk saying, “Give earrings to all the sisters.” In other words, give some to his competitors, Mikhail Yangel and Valentin Glushko, and the rest to Korolev. Money was not the only challenge. Glushko — the man who denounced him years before — constantly clashed with Korolev and undermined his work on rocket engines. Perhaps worse of all, the mercurial Soviet leader Nikita Khrushchev vetoed any coherent plan to beat the Americans to the Moon. “We can do fascinating ‘tricks,’ but for the specialist it is now clear that we lag behind,” wrote a contemporary.

Korolev had, in fact, achieved great things — the first Earth-orbiting satellite, the first man in space. He reveled in Gargarin’s achievement as a father would a son’s. But the toll on body and soul was heavy. Consumed by cancer, Korolev died on the operating table in 1966; his last labored breaths were through a jaw broken in the gulag. The Soviet space program never recovered. Meanwhile, von Braun and his team moved inexorably toward their dream of landing a man on the Moon.

In death, “Korolev’s legacy is at last visible,” writes Cadbury, “while, ironically von Braun’s glamorous image from the fifties and sixties began to tarnish.” Von Braun’s uncharitable epitaph; Sic transit gloria, but “for his Soviet rival the reverse occurred, as Korolev grew in stature … attaining near-legendary status.” Readers of Space Race are left in no doubt that for “the Chief Designer,” the paths of glory led from the grave.