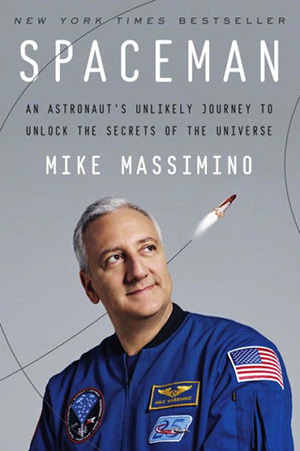 Spaceman: An Astronaut’s Unlikely Journey to Unlock the Secrets of the Universe is not just another book by an astronaut about his or her journey to achieve their dream of one day flying and living in space. Mike Massimino, or “Mass” as he is affectionately called, was first bitten by the space bug when he watched Neil Armstrong and Buzz Aldrin walk on the Moon. The book brings out his unique personal style, which spaceflight enthusiasts have seen in action in his narratives and videos that capture the essence of life in space. His down-to-Earth, unassuming attitude brings to life the challenges and triumphs he experienced in his journey through space.

The author describes a wide range of emotions, and is full of humor, but also shares the challenges he faced, including his struggles to earn his degrees and his battle with an eye problem that derailed his astronaut dream for years. Overcoming each, the ultimate triumph of his career was to be part of two repair missions to the Hubble Space Telescope.

The book follows Massimino from when he was a boy of eight, growing up in a working class family on Long Island. His mother made him a space suit and a helmet which he proudly wore as he imagined himself in space with his trusty Spaceman Snoopy by his side (Snoopy did accompany him on his shuttle missions into space). His interest in space waned as a teenager but was recaptured after seeing several space-related movies.

With his interest in space renewed, he went to Columbia University in New York City and then on to MIT for graduate work. Along the way he determined that the best way to leave his mark on space was to become a human factors engineer. There were roadblocks: for example, he failed his first attempt at his doctoral exam and was rejected three times by NASA due to eyesight issues. One theme seen throughout the book is his gratitude to the people he met along the way who believed in him when he doubted himself. Finally having his vision corrected, he became an astronaut in 1996. He still doubted himself and faced many challenges, losing his father, losing his friends on the Space Shuttle Columbia, and enduring the foibles of U.S. space policies that put Hubble repair missions in doubt. During long stretches when he had no flight assignments, he taught college engineering.

He flew in space twice, in 2002 aboard STS-109 on Space Shuttle Columbia and in 2009 on the Space Shuttle Atlantis for the STS-125 mission, both of them as a repair man on the Hubble Space Telescope. He has enormous pride in the work he and his crewmates accomplished to make Hubble whole again, although on the second mission, he had to break a handrail to complete his spacewalk. These missions gave him the opportunity to spend 24 days in space and log 30 hours of EVAs. His descriptions of Earth through the windows of the space shuttle were so descriptive that this reader actually felt that she was on the mission.

He also has movie and television credits on his resume: starring in an IMAX movie about Hubble, playing himself on several episodes of “The Big Bang Theory,” and appearing on several talk shows. He is currently teaching engineering at Columbia University, not far from his family roots on Long Island, NY. He enjoys imparting his knowledge to the younger generations. He also serves as a consultant to the Intrepid Air and Space Museum in New York City. The book an easy to read and honest and down-to-Earth personal look into the lifelong journey into space of Mike Massimino.