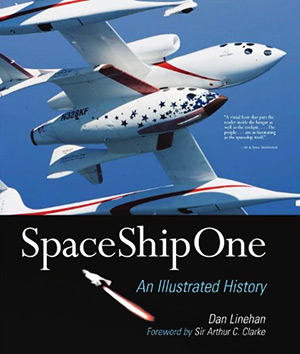 SpaceShipOne: An Illustrated History should have come out years ago. The reason I say this is because it would be even more popular had it come out within a year of the historic first flight of SpaceShipOne (SS1) that won the $10 million Ansari X Prize. SpaceShipOne is a detailed, coffee-table-size book offering the reader inside narrative details and pictures of this history-making vehicle. Part of the delay, presumably, was the result of decisions made by Burt Rutan, SS1’s legendary builder, who kept — and continues to keep — tight wraps on his projects.

What a treat, then, to see behind-the-scenes photographs of Scaled Composites’ development of SS1, now sharing pride of place in the Smithsonian Air & Space Museum between Charles Lindbergh’s Spirit of St. Louis and the Bell X-1, the first craft to break the sound barrier. In fact, one of my favorite images would have made a great cover for Aviation Week & Space Technology: it shows Rutan and flight test director Doug Shane pulling aside a curtain to reveal the still-under-construction SS1. This “peek behind the curtain” sets the stage for a very thorough set of developmental photographs and graphics. Dan Linehan managed to gain access to SS1’s “baby pictures,” providing a much-better-than-average set of images celebrating this unique craft.

The book itself includes a coveted foreword by the late Sir Arthur C. Clarke, in what must have been one of his last endorsements. Sir Arthur sets the tone well by stating, “This, then, is the inside story of how citizens reclaimed space.” Rutan and his team managed to do what few people would have believed possible: design, build, and fly a vehicle capable of reaching the lower boundary space for about $30 million without government assistance. It is natural that people will be interested in the inner workings of such an achievement.

One thing Linehan makes clear is that Rutan had space on his mind well before he ever formed Scaled Composites or went after the X Prize: Apollo was the reason Rutan got into the aviation business in the first place. The book begins with a brief biography of Rutan and his experiences in working with and designing aircraft, starting with his time as an engineer for the Air Force and working forward to the founding of Scaled Composites. He started designing spacecraft in 1993, where the path to SS1 was already evident:

His first ideas focused on a single-person rocket carried as an external store [like an extra fuel tank or weapon on a military aircraft] by a mothership. The carrier aircraft would pull up and then shoot it off like a missile.

The book then describes some of the twists and turns the vehicle took on the way to its final form. One of several things I learned from this book was that Paul Allen, cofounder of Microsoft, entered into partnership with Rutan in 2000, well before he went after the X Prize. Allen and Rutan were determined to get this bird up and flying regardless of the X Prize, which they weren’t certain would be fully funded.

Subsequent chapters address the history of the X Prize, now named for the Iranian-American entrepreneurs who brought it to full funding; a description of the first SS1 flight into space; construction of the vehicle; design of the rocket engine; instruments and controls; flight testing; and a transcript of the flight that won the X Prize itself. It is actually unfair to call Linehan’s book a “coffee table book,” as it gives more background information and text than such a book would generally provide, but it falls short of being a full technical history of the vehicle.

I should note here that I met Linehan (pronounced LEN-uh-han) at the 2008 International Space Development Conference, so I was able to get him to answer some questions that came up during my reading. For example the third chapter, where he describes the first SS1 flight, seemed out of place for me. However, he explained that this description of the flight was placed near the front to help the reader understand what the vehicle was designed to do and what a typical SS1 spaceflight was all about. Once he explained that, it made sense.

Though Linehan managed to cover a lot of territory in 52,000 words (I was given 45,000 to work with, he explained), I wanted to know more about the development of White Knight, the carrier aircraft for SS1, and how Scaled managed to overcome the vehicle’s roll experienced by pilot Mike Melvill. The vehicle had corkscrewed upward, beyond the point where normal aerodynamic controls have any effect, and Melvill ended up rolling 29 times (he did a barrel roll toward the end of his flight to make it an even 30, scaring the chase plane pilot following him). Linehan told me that on subsequent flights the pilot began the ascent maneuver more gradually to ensure more aerodynamic control of the vehicle — SS1 itself was not changed.

Until a full technical history of SS1 is written, Linehan’s book provides an excellent overview and visually dramatic book that is sure to entertain and educate space enthusiasts.