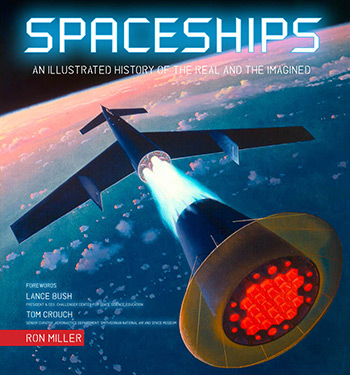 Spaceships by artist Ron Miller and appropriately published by Smithsonian, is a museum in book form, with images, captions, and text acting like display cases on every page spread. The “collection” is organized by topics with both fact and fiction showcasing how artists and engineers influence and inspire each other’s creations. Ray Bradbury (1920-2012) explains the synergy. “Science fiction is the most important literature in the history of the world because it’s the history of ideas, the history of our civilization birthing itself…. Science fiction is central to everything we’ve ever done.”

The book includes a smorgasbord of brief profiles of inventors, artists, and engineers, including the first martyr to spaceflight, Austrian Max Valier. He was killed in 1930 while experimenting with a liquid-fueled rocket motor. Prior to his death, he’d authored numerous articles promoting spaceflight, organized public events with rocket-powered cars and sleds, and designed the first rocket-propelled aircraft, which flew in 1928. A German composer, Johann Schadler, was so inspired by Valier that he wrote a “Spaceflight” march and put one of Valier’s spaceships on the cover of the sheet music.

Another early space promoter who merited a profile is Constantin P. Lent, an engineer and member of the American Rocket Society who made his living in the 1930s doing drawings for patent applications. In a self-published book, he documented a “landing pick” method used by modern spacecraft to “stick” their landings. In the 1940s, this early space enthusiast also published one of the first books about rocket propulsion in the U.S., as well as a regular journal full of original ideas for future space travel—some of which might still be useful, in both fact and fiction.

Many of the historical images of magazine covers, posters, and sketches of spacecraft are rare and well worth viewing. One that brought a chuckle, and may inspire a few Halloween or cosplay costumes, is a spacesuit patented by Fred M. Sample in 1918. The tin bucket-on-the-head look perfectly “suits” a Jules Verne-style cannon shot to the Moon.

The author declares that the 1950s were the golden age of space travel. “The reality of the V-2 combined with a flood of nonfiction books and magazine articles—created an atmosphere that was supersaturated with spaceships.” Thus, Germans Werner von Braun, Ernst Struhlinger, and Krafft Ehricke, who built the V-2 rockets used in World War II and who designed rockets for the Apollo Program, are profiled. The entries are “museum placard” style with a paragraph or two about the person and their contribution with most of the space devoted to art and photos. With the focus on the spacecraft, the missions and the pilots/astronauts who flew them are not mentioned.

Like a museum that has more artifacts than exhibit space, images are crammed into every available spot within the margins of this large book. To make room, the font size of the captions is so small that they are almost unreadable. Gray type on colored background doesn’t help.

Despite the eye-straining format, the space memorabilia images are captivating enough for space enthusiasts to search out a sunny room where they can spend some quality time admiring this unique collection. One of my favorites is “A Car for the Moon” (1923) by Clement Fezandié that shows a spaceship being launched from the rim of a giant flywheel. What a fantastic way to get to work!

The final chapter, called simply, “The Future,” is a mash-up of 20th century science fiction such as Star Trek and Dr. Who with failed or cancelled programs including the Russian Buran, American X-33, and NASA’s Constellation. Instead of the future, “Recent Past” might be a better title since the chapter covers the decade-old XPRIZE contenders, the mothballed Altair Lunar Lander, and the original Orion design to take six crew members to the International Space Station. The Chinese merit only one photo of Shenzhou. Information about new spacecraft other than SpaceX (Orbital Sciences, Planetary Resources, Boeing’s CTV) is out of date or missing.

The author’s lack of attention to new spacecraft, mission plans, and science fiction (dominated by dystopian futures!) may reflect the uncertainty and lack of political consensus on the near-term future of the space industry. Spaceships is therefore a timely reminder of how important it is for space enthusiasts to share their positive vision of the future via organizations like the National Space Society and help jumpstart a new golden age of spaceflight.