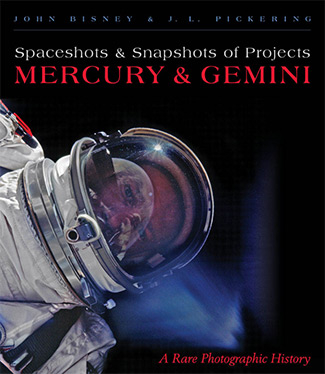 The subtitle of Spaceshots & Snapshots of Projects Mercury & Gemini is A Rare Photographic History. Interpreting that subtitle two ways reveals its full meaning. First, the book offers an array of 689 photographs, many in color, the “great majority” of which are previously unpublished. Co-author John Bisney wrote that “Almost all the others are at least uncommon.” A rare collection, indeed.

The second interpretation is that the presentation of the history of Mercury and Gemini is rare as well. Each chapter begins with about a page and a half of informative introduction and then erupts into a dozen or so pages containing two to six photos each. The caption for each photograph provides details about the image’s content and context. Nearly every individual shown in each photo is identified. Interesting details are noted; for example, in a photo of Jim McDivitt, Guenter Wendt, and Ed White in a launch-complex white room, the caption points out two partially obscured items in the background: “An emergency shower (behind White) and a taped notice stress the need for a clean spacecraft.” Another photo shows a graphic artist painting the logo she designed for Mercury-Atlas 7 on the capsule; the caption explains that she “used different types of paint to evaluate which would best survive the heat of reentry.”

The authors give nearly equal coverage to all six manned Mercury flights and nine manned Gemini missions, devoting an entire chapter to each. The only exception is that the flights of Gemini VII and Gemini VI-A are covered in a single chapter, as the latter’s one-day flight occurred during the former’s two-week mission and the two spacecraft maneuvered together in orbit.

Most of the photographs were culled from more than 100,000 that co-author J. L. Pickering has collected over more than four decades. They include both candid and staged pictures of astronauts (in flight and on Earth), their families, hardware, flight and recovery crews, news reporters and photographers, and spectators. In amassing and studying his collection, Pickering acquired detailed knowledge of each mission. Bisney, the other co-author, also had an impressive base of knowledge from his thirty-year career reporting on the space program as a national radio correspondent. Not relying solely on those backgrounds, however, they diligently researched and verified the material in this book.

“I thought I had an extensive knowledge of the subject,” Bisney wrote in the preface, “but researching this effort provided me with a real education and an entirely new understanding of the magnitude of what, in retrospect, seems an almost astonishing plan…. The degree of planning, coordination, communication and logistics to pull it off in the age of typewriters and telephones is truly astonishing.”

In addition to helping select the photographs, Bisney wrote the captions for them, often adding technical explanations, interesting details, and context. The degree of detail is illustrated by an excerpt from the caption of a photo showing Gus Grissom talking with “astronaut den mother” Lola Morrow during a photo shoot for a magazine article. In the photo, Grissom is looking at a paper that Morrow is holding. “The document is a purchase order for linens from the Titusville, Florida, JC Penney store for the astronaut crew quarters,” Bisney wrote.

The book is beautifully produced, the photos appearing crisp on the high-quality glossy paper. In a few instances, I found myself searching photos for details mentioned in the caption but the image was too small to make them out. Several pages presented with white text on a black background are a bit difficult to read.

In the foreword of Spaceshots & Snapshots of Projects Mercury & Gemini, retired astronaut Tom Stafford refers not only to the current volume, but to its sequel, Moonshots & Snapshots of Project Apollo (September 2015). Stafford flew on four missions in the Gemini and Apollo programs and the Apollo-Soyuz Test Project, which is also documented in the second volume along with Skylab. “I had not seen many of the photos in these books before or heard some of the stories, so I appreciate the efforts of the authors,” Stafford wrote. “Their research … takes you behind the scenes and gives you a better appreciation for the enormous size of the undertaking [of the space programs].”

This is a book you will want to keep after you’ve read it. It is packed with so much detail, both visual and textual, that it will be worth revisiting over and over.