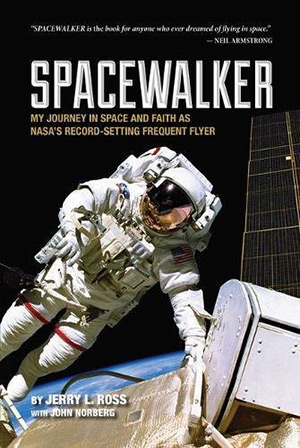 How does a man who grew up on a farm in Indiana, who was not an all-A student, whose family couldn’t afford to send him to college, who never learned to swim, and who was rejected for pilot training end up as a record-setting NASA astronaut? The answers are in Spacewalker: My Journey in Space and Faith as NASA’s Record-Setting Frequent Flyer by Jerry Ross.

Ross is the epitome of an engineer, not just because he designs and builds things, but because of the way he approaches life as a series of challenges to be addressed using logic and reasoning. While he was in 4th grade, the Russians launched Sputnik, the first artificial satellite. A few months later, the U.S. responded with Explorer 1. The young Jerry Ross realized that building rockets to take people into space was the logical next step, and he simply had to be part of that. “There has never been an important decision I have made that I would reverse,” Ross said. So when he decided in 4th grade that instead of becoming an Indiana farmer or industrial worker like others in his family, he would go to Purdue University, become an engineer, and work in the space program—there was no turning back.

The future engineer divided his life goal into phases. The first was getting into and paying for an education at Purdue. He wasn’t an all-A student, but he put his best effort into his math and science courses. He also built practical skills by designing and launching model rockets. Like the real space program, he had successes and some spectacular failures, and learned from both—especially about sacrifices that families often make. One poignant example was the death of his sister’s pet mouse when one of Ross’ rockets failed and crashed.

To address the cost challenge, Ross worked odd jobs on farms: baling hay, vaccinating chickens, and laying concrete. He even worked as a janitor for the local schools, earning enough money to buy a motorcycle so he could work and get to football practice.

He made it through phase 1 of the design and building of an astronaut: He got accepted at Purdue. Getting an engineering degree was Phase 2. Engineering courses are tough, but it was physical education (P.E.) that almost derailed his plans. The only options open to freshmen were swimming and military ROTC. While most people might assume Ross joined ROTC to help pay for college, that was not his motivation. He’d never learned to swim, and he wasn’t about to risk his engineering degree by failing P.E. So he signed up for ROTC instead. As unbelievable as it sounds, Ross became an astronaut and trained for spacewalks in the world’s largest swimming pool without ever learning how to swim!

He also managed to become an astronaut even though the Air Force rejected him for pilot training based on a faulty eye exam. NASA had hired some scientist astronauts like Apollo 17’s Harrison Schmitt, and this gave him hope that he still had a shot if he continued with his engineering degree. He completed Phase 2 by graduating in 1970, a year after the first Moon landing. He went on to get a master’s degree in mechanical engineering.

The final phase of Ross’ goal to become an astronaut followed a circuitous path that no one before him had taken. Instead of being a pilot or a PhD scientist, he decided to be a flight test engineer. The Navy program required swimming, but fortunately, the Air Force program didn’t. He entered the program at Edwards Air Force Base in California. From there, he applied to the astronaut program, but he was rejected. Some less determined people would have given up at that point. But Ross did something that few would have the courage to do: He called the NASA manager in charge of selection, George Abbey, and asked how to be better qualified for the next round. Abbey suggested he take a job at Johnson Space Center, and Ross followed this advice.

He was accepted into the astronaut program in 1980 and flew on the space shuttle a record seven times. He also performed nine spacewalks. Readers will enjoy the tales Ross shares from each of these flights, including both humorous and heart-wrenching experiences with his fellow astronauts during missions, and in the midst of the tragedies of the Challenger and Columbia losses. Numerous anecdotes by his wife, daughter, son, and childhood best friend add laughs and depth to the life of an astronaut that prove the power of faith and dreams.

After reading this book, I couldn’t agree more with what Apollo 17 astronaut Eugene Cernan says in the foreword: “Spacewalker: My Journey in Space and Faith as NASA’s Record-Setting Frequent Flyer is the story of one man’s lifelong quest to explore the unknown, overcome setbacks and obstacles, and keep the beacon of space shining in the hearts of all people, young and old. This book is about an American Dream.