Book Review: Starman: The Truth Behind the Legend of Yuri Gagarin 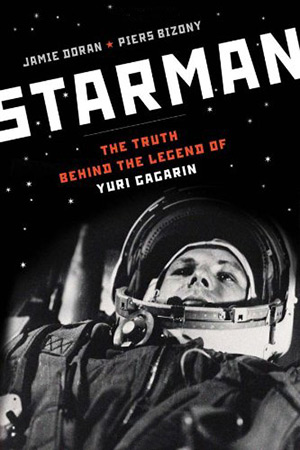 Writing accurate history isn’t easy under the best of circumstances, and the propagandists of the Soviet Union made accurate fact-finding about people and events in Russia next to impossible for most of the 20th century. But there was a brief window of opportunity in the 1990s, after the fall of the communists and before the rise of Vladimir Putin, when the people and archives of the U.S.S.R. became accessible to dedicated western journalists. Jamie Doran, a BBC documentary filmmaker, took advantage of that window of opportunity to research and produce a biographical film and draft a biography about Yuri Gagarin. Doran was able to interview members of Gagarin’s family, engineers and fellow cosmonauts, and even Gagarin’s chauffeur and K.G.B. handlers. The result is a fine addition to our knowledge of the Soviet side of the space race, and a truthful look at a human icon.

Readers will be startled by many of the details in the book, such as the description of a pre-teen Yuri who became an unofficial member of the Russian resistance to German occupation during World War II, sabotaging the batteries of German tanks and trucks after a German soldier tried to hang his baby brother. And who would imagine that the first job he had as a young adult would be as foundry apprentice in a steel mill?

This book shows us an honest and decent man who began as a true believer in the communist state, and ended his short life disillusioned with the corruption of that system. However, he was still determined to do his best within that reality, and determined to fly in space again. Being introduced to the real man behind the cardboard cutout version of Soviet propaganda is a moving experience, and one that has been too long coming.