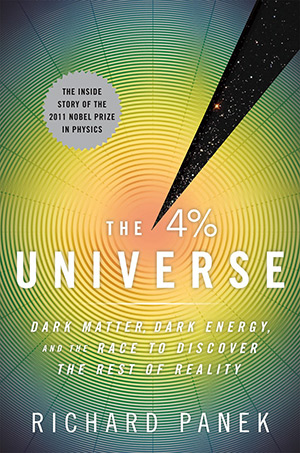 The universe is keeping secrets from us. Deep secrets. Dark secrets.

Of course, the universe has always kept secrets. When Galileo published the first observations he’d made with his hand-built telescope in 1610, we realized that there was far more to the universe than we could see. Galileo showed us the Moon’s mountains, Saturn’s rings, and Jupiter’s moons. What else was the universe hiding from us? Nearly everything, it turns out.

One by one, astronomers found new ways to peer into space, to measure, probe, and reveal answers. But one secret — one very dark secret — continues to baffle us. From various cosmic yardsticks, we’ve learned that the universe we can see is only four percent of the whole. So where is the rest of it? And just what bizarre stuff is it made of?

By itself, the quest for those answers would make a more-than-adequate story. But Panek also addresses third and fourth questions: Who is pursuing the answers to the first two, and just how far are they willing to go to find them?

This is a story about not just science, but also scientists, with enough dueling personalities, epic failures, inspirational triumphs, and out-and-out rivalries to carry a Hollywood blockbuster — should Hollywood ever turn its attention to the world of cosmology.

Start with astronomer Vera Cooper Rubin. Balancing family with career had taught her to choose research projects based solely the usefulness of their results, rather than the attention they might draw. In 1968, analysis of her painstaking measurement of stellar velocities in the Andromeda Galaxy revealed something unnerving: Instead of slowing down, the stars and gas farther from Andromeda’s center were actually circling at the same rate as those deep inside. In order for the results to make sense, there had to be more mass — gas, dust, or something. Something we couldn’t see. Astronomers were baffled.

Then physicist Jim Peebles was lucky enough to get free time on a supercomputer. With it, he attempted to model the expansion of the universe from the Big Bang onwards. But something strange was happening. Instead of expanding homogeneously, the galaxies in his simulation formed clusters, and clusters of clusters. Some regions of space in his model had more matter and energy than others, creating a decidedly inhomogeneous universe. Peebles was ready to write this off as an early and flawed attempt to model the universe — until the same problem showed up a few years later in a simulation of a galaxy forming. It turned out the only way to make a stable spiral galaxy was to add more mass to the computer model.

Astronomers realized they must be underestimating galactic masses by factors of 10 or more. The mass couldn’t really be “missing.” Something was out there; we just couldn’t detect it. So the hunt was on — and continues even now.

In covering the quest so far, Panek spotlights an amazing and intriguing cast of characters, from Rubin and Peebles to determined “born physicist” Saul Perlmutter, from supernova specialist Brian Schmidt to “big” David Schramm, and others. With wry touches, he also reveals a much grittier astronomy than that practiced in the early 20th century, when nattily dressed men in remote mountaintop observatories made astronomy seem the very quintessence of ivory tower science. This, delightfully, is a story of personalities as well as ideas and obsessions, where limited resources like telescopes and supercomputers make for a kind of “Wild West of the Mind,” where brief alliances and long-standing rivalries can make or break a theory. Where else would receiving an invitation to a cosmology workshop with Stephen Hawking be compared to getting a Golden Ticket from Willy Wonka?

Panek first began this story as an article for The New York Times, and he has deftly expanded it to a full-fledged saga, built on in-depth interviews and exhaustive research. The balance between lively characters and provocative ideas keeps the book moving as quickly as any high stakes thriller, but the pay-off here is an answer of truly cosmic significance.

The universe is keeping secrets from us — big secrets. Dark secrets. Panek’s joyful journey through the wilds of modern cosmology gives us good reason to care about those secrets, and their sure-to-be-surprising answers.