Book Review: The Attempt (The Martian Manifesto Book One) 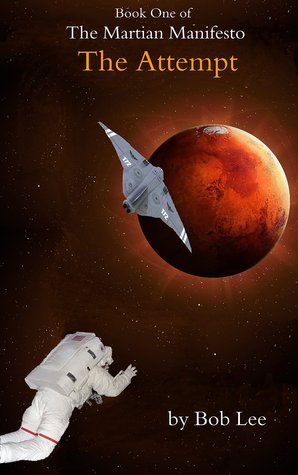 I’m always a bit reluctant to read a self-published science fiction book because I’m both a nitpicky editor and a hard-to-please science fiction fan. But I decided to read The Attempt because Bob Lee’s book reviews for NSS have been consistently well-written and reveal his broad knowledge of human spaceflight. The spaceflight parts of this book were not only plausible, but actually part of the story rather than superfluous background trappings. And the story is engaging all the way to a satisfying conclusion.

A cast of characters tell the story in three settings: on Mars, on the Moon, and en route to Mars on an asteroid cycler. The story opens with an alien landing on Mars to set up for an attack on Earth. Then, after a simulation with two characters that never appear again but foreshadow later developments, we meet Bonnie. She is one of a group of privately funded colonists being escorted to Mars by two NASA astronauts. These colonists are part of a cult led by Brother Jacobs who promises they will merge with some great consciousness. Bonnie is the wife of the second in command of the colonists. We quickly see that her husband is an abusive, despicable person, and hope, along with Bonnie, that starting over on a new world will improve her personal situation as well.

NASA has established a small research outpost on Mars. The crew of four is all male, with one Russian. The viewpoint character is a biologist named Chuck who is rather ridiculously henpecked by his fiancé back on Earth. The first encounter between the alien and crew is told both from the alien and Chuck’s point of view. The decision by NASA to keep this encounter secret is believable in context. However, I found the choice not to inform the approaching colonists or even fully inform the NASA escorting pilots, in spite of a managing subcommittee ordering them to remain silent, less well supported, considering the NASA escorts are responsible for the colony’s safety.

But the secrecy plays a major role in the plot as the Chinese, who are eavesdropping on the NASA-Mars communications, find out about the alien attack. They aren’t worried about causing panic on Earth or helping the colonists: they want to capture the alien technology for China. The viewpoint character on the Chinese lunar base is lead scientist Li Julong. He is ordered by a general to load and launch supplies and train a group of Koreans for a “fast” Mars mission that is commanded by a decorated soldier sent from Earth.

As the colonists with their escorts, the Chinese, the crew on Mars, and the alien’s objectives collide, the story really takes off. Space enthusiasts will enjoy seeing the use of mass drivers on the Moon, an asteroid turned into a cycler using Bigelow inflatables, and the Mars crew using “tuna can” habitats and pop-in Russian spacesuits. Bob Lee also sprinkles in references to classic sci-fi and employs gadgets and “conventions” with creative twists. The Mars guns and the entry especially found me smiling at the audacity and ingenuity of these Martian pioneers. They definitely have the right stuff!

The story has a sort of “comic book” feel to it, with most characters exhibiting expected stereotypical behaviors. Things happen, and the characters react, but no one overcomes some deep-rooted personal issue or sits around philosophizing about the significance of encountering an alien intelligence that has interstellar travel capability. Instead, like most people and apparently some aliens, they grumble about having to do something they aren’t prepared or especially willing to do, and then do it anyway because they must. And in a future where NASA is so strapped for funds that it is willing to launch a group that includes children without so much as making sure they all have spacesuits—well I suppose anything is possible!

The Attempt is the first book in a series called The Martian Manifesto. If the next installment is as much fun as the first, this new space opera will have lots of fans.